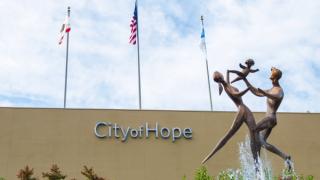 By
Abe Rosenberg
Faculty
Research
Research News
Mark Helak had it all figured out.
"Being the son of a doctor takes all the mystery out of the system," he said. "I know how doctors think."
Watching and listening to his father, a radiologist, as well as his uncle, a surgeon, gave Helak early insight into the medical field and his own health, which was always exemplary. He proudly says he was "never sick a day in my life, not even a bad cold." And he was in great shape, excelling at multiple sports in high school.
He wanted to be a Navy pilot, but an early glaucoma diagnosis grounded him. So he pivoted to the business world, working as a salesman for a variety of companies, including one that produced enzymes for immunotherapy drugs. Now, he thought, he really understood doctors and the system.
Except for one thing.
Here he was, all these years later, now 63, and he'd never had a colonoscopy (the American Cancer Society recommends anyone of average risk get screened beginning at age 45). He didn't see the need. His health was excellent. He ate right and exercised. He had no symptoms. And no one in his family had ever had colorectal cancer. Why bother?
His family disagreed. During a vacation trip, they staged an intervention.
"My brother, who's also my best friend, made me sign a contract agreeing to get a colonoscopy," he recalled. "I did it to appease the family. I expected a routine result."
What happened instead left him "gobsmacked."

Helak had cancer. A Stage 1 adenocarcinoma lodged in his lower bowel, near the rectum.
"It was a bolt out of the blue," he said, adding that both he and his wife nearly fainted on hearing the news. "I remember thinking, 'What the heck just happened to my life?'" Suddenly Helak was one of the more than 150,000 Americans diagnosed with colorectal cancer every year. Many of them had waited even longer than Helak did to find out.
"The number of people who take advantage of a colonoscopy is less than 50%," explained Lily Lai, M.D., associate professor in the Division of Colorectal Surgery. "I frequently have patients 80 or 85 years old who've never had a colonoscopy."
Caught early, cancer of the colon or rectum can be removed surgically, with a survival rate of 90% or better. The numbers go down as the cancer spreads.
Trouble is, early-stage colorectal cancer can be silent, presenting no symptoms. By the time you do feel unwell it can be too late. The most effective way to stop this cancer early is to test regularly - at least once every 10 years if you're over 50, more often if there's colon cancer in your family or you have other risk factors.
Helak, a 30-year resident of Long Beach, California, wanted to act quickly, but the doctors in his local network were slow to respond. Frustrated by many days of waiting ("agonizing," as he puts it) he and his wife looked up City of Hope's 800 number. They knew no one there. No one had referred them. They simply "cold-called."
Barely 72 hours later, the Helaks found themselves at the Duarte campus, where an entire team was waiting for them. "By day's end," Helak recalls admiringly, "during a dawn-to-dark marathon, all the lab tests, imaging procedures and introductions to my surgical/oncological team had been fully accomplished."
Even more important, Helak says everyone at City of Hope was "concerned about the human being. I was a person in their eyes, and I felt like a person."

That goes double for Lai, Helak's surgeon. One handshake on Day 1 told Mark everything he needed to know.
"Her hands were tough - but not calloused - from years of tying surgical knots," he recalled. "Strong surgeon's hands. Good hands to be in!"
Lai laughs.
"He's an interesting guy. It was a pleasure to take care of him."
What impressed Helak most about that care was that nothing was imposed on him; all options were laid out and explained. And he says Lai sensed his apprehension and spoke to it.
"That's how I was taught," she said. "Our challenge is to understand what's really going on with the patient, how they react to their diagnosis. The balance they strike between "doing everything we can" and the risks involved. It all makes a difference in what I'll recommend.
"I understand when a patient is scared," she continued. "I acknowledge it. That's the first thing I do. Then I inundate the patient with information, the details of the disease, so they know what they have. Then we talk treatment. Understanding their situation helps them set up boundaries, the better they can wrap their minds around it."
Together they decided on a lower anterior resection (LAR) procedure, which has evolved and improved significantly over the years, especially with the advent of newer surgical stapling devices. Performed laparoscopically and frequently robot-assisted, LAR avoids the drawbacks of earlier procedures, including damage to other systems, like the sphincter, and the need for a permanent ostomy - an opening in the abdomen covered by a pouch.
Many LAR patients do receive an ostomy temporarily. "Most don't want it," acknowledged Lai, "but it helps the colon heal. When patients understand that, they're more amenable." Helak agreed. "Knowing my colon was protected while healing reinforced my confidence," he said.

Coping With After Effects

The biggest challenge with LAR is a collection of postoperative symptoms known as â€œLAR syndrome,â€ ranging from constipation to constant feelings of urgency to unusually large numbers of bowel movements per day. Helak experienced the latter, often needing to use the restroom 20 times, a fact he meticulously reported to Lai.
â€œHe made me a spreadsheet!â€ she laughed.
Now two years past his surgery, Helak is doing well, essentially back to his old self and remembering the small things: acts of compassion. How his nurse clustered recovery care routines so he could sleep undisturbed. Or how, weeks before the procedure, when he had anxieties and Lai was away, another surgeon, Kurt A. Melstrom, M.D., whom heâ€™d never met, spent an hour with Helak on the phone, answering all his questions.
For these and many other reasons, Helak now leverages his natural-born sales acumen to speak on behalf of City of Hope at various gatherings.
â€œI think City of Hope is a special place,â€ he says. â€œThereâ€™s no clinical detachment like at other hospitals. Patients here are more than clinical specimens. Theyâ€™re people. With families. You feel nothing but care and compassion here.
â€œCancer is not a death sentence,â€ he continued. â€œThere are all kinds of things that can be done now, and City of Hope has its finger on the pulse of all of it.â€
He saves his highest praise for the strong-handed surgeon who saved his life.
â€œDr. Lai is the best!â€ he smiled.