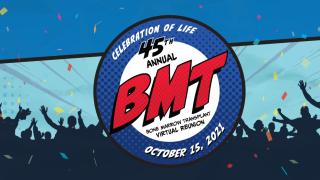 City of Hope’s bone marrow transplant program started with just two physicians, three beds and guarded expectations in 1976 when a young college student was admitted as a patient and became the hospital’s first successful bone marrow transplant. The student was one of City of Hope’s longest-surviving BMT patients and would remain in remission for the rest of his life.

City of Hope's bone marrow and stem cell transplant program is now one of the largest, most successful programs of its kind in the U.S. We perform more bone marrow transplants than any other hospital in the region and are among the top three hospitals in the nation in terms of total transplants performed. In fact, City of Hope recently performed the procedure on its 17,000th patient, a remarkable milestone.

The laboratory and clinical researchers have led the way in making transplants more effective and safer, with fewer side effects. The advent of BMT marked an important step forward in the battle against leukemia, lymphoma and other diseases of the blood and immune system, and City of Hope has played a crucial role in the advancement of the procedure. With growing success with nonrelated matched donors and, most recently, partially matched donors, BMT is saving more lives than ever before.

The “Celebration of Life” BMT reunion is an annual highlight at City of Hope. The reunion started 45 years ago with just one patient, his family, his doctors and a cake with a ‘1’ candle celebrating the one-year anniversary of his transplant. From there, the reunion grew to a small group of patients and their families. Only this time, Stephen Forman, M.D., and several nurses got together and cooked spaghetti the night prior to the celebratory lunch party held in a conference room at City of Hope.

Today, the reunion has grown to become one of the biggest events the institution hosts each year, bringing together more than 4,000 attendees. Proudly wearing buttons indicating the anniversary of what they call their “second birthday,” patients return to the Duarte campus to reunite, rejoice and reminisce in their common bond as survivors. This year, they will celebrate virtually at an event that will bring them together in a new way as an online community to share this time with other patients, their family, friends and the team at City of Hope who cared for them.

College student and retired teacher to thank stem cell donors they’ve never met for saving their lives. The reunion — held virtually due to the COVID-19 pandemic — brings together blood cancer survivors and their donors for the first time, as well as other grateful transplant patients, donors, families and medical staff.

The reunion — held virtually due to the COVID-19 pandemic — brings together blood cancer survivors and their donors for the first time, as well as other grateful transplant patients, donors, families and medical staff.

More than a year after his transplant at City of Hope, Joseph Montañez, 8, finally had the chance to thank the woman “who gave me the good blood" during the 44th annual Bone Marrow Transplant Reunion, held virtually for the first time.

The virtual reunion brings together young boy and donor for first time and other grateful patients/donors.

Joseph Montanez plans to thank the donor he’s never met for saving his life during City of Hope’s 44th Bone Marrow Transplant Reunion. The virtual reunion will also bring together other grateful patients and donors for the first time.

A San Diego second grader and a Mount Shasta resident give thanks to donors who saved their lives at May 10 event.