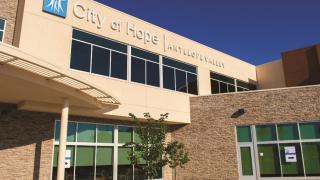 By
Abe Rosenberg
Patient Care
Very early on, colleagues noticed something different about Tanyanika Phillips, M.D., M.P.H.
Walking the halls, Phillips greets everyone — doctors, nurses, orderlies, clerks — with a hearty “Good morning!”
One observer admiringly told her, “The amount of respect you give folks is simply another level.”
Africa Robison, a City of Hope patient navigator, witnessed this behavior from the first day the two met and immediately became “like girlfriends.”
“She’s everyday people,” Robison said. “She talks to everyone in the building. There’s no one she won’t interact with. She sits with patients to get to know them. She’s relaxed, easygoing, relatable, hilarious. She’ll share her own personal stories. She sees the human, not just the clinical case.”
Phillips shrugs.
“I couldn’t do it any other way,” she says.
Tanyanika Phillips, M.D., M.P.H.
Ever smiling and with a hearty laugh that comes easily and often, Phillips, an assistant clinical professor in the Department of Medical Oncology & Therapeutics Research, is described by friends as having “a big personality.” Not many know just how big. We’re talking positively royal!
In 2012, Phillips, a New Orleans native, was crowned the city’s official Zulu Queen before an audience of 25,000 people. Zulu, a century-old social aid organization, is a major presence at Mardi Gras. The Zulu “king” (Louis Armstrong had the honor in 1949) chooses his “queen.” Phillips was selected by attorney Elroy James, a childhood friend. When they were both 13, James promised “to make me his queen.” A quarter-century later, he did.
She is an unmistakable presence at City of Hope’s Antelope Valley facility in Lancaster, where she’s been since 2019. Phillips specializes in lung cancer but focuses much of her time, energy and research on geriatric oncology — the unique needs of older cancer patients — an area she believes deserves greater attention.
“I wanted to pursue care for older adults,” she explained, “because I felt their voices were not well represented despite being at the center of the conversation regarding cancer.”

She works hard to undo the stereotypes and paternalistic attitude toward seniors that she’s seen in the medical community.
“Some people equate old with frail,” she laments. “Some doctors automatically assume an older cancer patient won’t want a particular treatment because of age. Don’t put them in that box. You have to meet the individual. You must take their needs and beliefs into account.”
And when you do that, Phillips says, you see and learn some remarkable things.
She recalls treating a 94-year-old former marathon runner with lymphoma who “didn’t want age to get in the way.” She laughs at the memory of an 80-year-old woman who walked into the office for an appointment and proceeded to do an athletic split on the floor. She told Phillips, “I wanted you to actually meet me before you just looked at my chart.”
Where some may buy into the stereotype that older folks are not as mentally sharp as they once were, Phillips emphatically says her experience has been the opposite.
“I find them exciting,” she said. “All the rich stories that come from them. Stories of hard work, community, resilience. They’re amazing.”
Her deep respect for elders is homegrown. As a child, Phillips spent a great deal of time with her grandmother because her mother was frequently in the hospital due to a chronic illness. “Grandma was a big influence,” she recalled. “So wise and witty. It reminded me to always listen to older people.”
She began thinking about becoming a doctor by the time she was 7 years old, visiting her often-hospitalized mother and being intrigued by all the medical activity going on around her. Later, when both her mother and aunt developed breast cancer, “it confirmed my desire to be a physician,” and pointed her toward oncology, both to help patients and to research better ways to benefit communities: the elderly, the underserved, the medically illiterate. She’s the first doctor in the family.
Her resume is formidable, jam-packed with awards and a plethora of oncology and public health programs from Harvard, Johns Hopkins and Case Western Reserve University (“She’s brilliant,” added Robison).

But it is the way she combines her broad knowledge with equally deep compassion that most impresses her patients.
“This is the most amazing doctor I have ever had,” gushed one such patient on a popular doctor ratings site. “She sat and talked with me and my sister for over an hour. She ran tests that no one else had ... dug deeper than any doctor had, and she got to the bottom of it. I love this doctor and there is no doubt in my mind she saved my life.”
Happily, Phillips says that kind of outcome is happening more often, even with lung cancer patients.
“This is a burgeoning field with enormous opportunity for intervention,” she said. “There are so many new treatments now — immunotherapies, monoclonal antibodies and more. It’s an exciting time. I’ve had patients, even late-stage ones, who are thriving years later.”
But when a life can’t be saved, and difficult discussions must take place?
“This is the most important part for me,” she solemnly explains. “I’m drawn to it, and I give it my all. It’s an honor to be with a patient at that particular time.”
Her compassion comes from a personal place. Years ago, Phillips lost her husband to multiple sclerosis. She remarried, but recently watched her new spouse succumb to COVID-19. He was 36.
She connects with patients by sharing her own story. She truly feels she was blessed with this unique ability, and her colleagues agree. Many send patients to Phillips to help them navigate end-of-life issues. Here again, Phillips makes no assumptions based on age. Rather than impose anything, Phillips always asks, “Let me hear your thoughts about it.”
As a physician and researcher, Phillips feels perfectly situated at City of Hope. She contributes her expertise to the Center for Cancer and Aging, and she plays a key role in the growth of the Antelope Valley facility, which is developing into a research hub. More than a dozen clinical trials across disciplines are underway or soon to begin there. Phillips is part of a team led by William Dale, M.D., Ph.D., the Arthur M. Coppola Family Chair in Supportive Care Medicine, at City of Hope’s Center for Cancer and Aging and will help direct a multicentered $4.5 million grant focused on two community-based projects highlighting the importance of geriatric assessments and striving to achieve better outcomes with fewer toxicities for senior patients.
“City of Hope is so blessed to have her,” concludes Robison. “She’s the water in the desert here.”