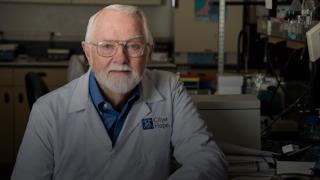 By
City of Hope
Diabetes
Featured
Research
Arthur D. Riggs, Ph.D., the world-renowned diabetes expert who developed the technology that led to the first human synthetic insulin for the treatment of diabetes, died March 23 after battling cancer. A biotechnology pioneer and a longtime leader at City of Hope, Riggs served as director emeritus of Beckman Research Institute of City of Hope and the Arthur Riggs Diabetes & Metabolism Research Institute at City of Hope.
Riggs’ major scientific discoveries achieved over more than a half-century of research, paving the way for development of the monoclonal antibody therapies that are the foundation of modern treatments for cancer, autoimmune diseases, blindness and a host of other diseases. His breakthrough work in diabetes enabled mass production of insulin for people living with the disease. Today, synthetic insulin is used by hundreds of millions of people.
He was 82.
Riggs was already recognized for his novel research into the inner workings of DNA when he joined City of Hope as a research scientist in1969. In 1977, his research led to the creation of the first artificially synthesized gene and human protein, the important hormone inhibitor somatostatin, followed not long after by the first ever synthesis of human growth hormone. A year later, he was able to apply this disruptive technology to produce human insulin from bacteria — a breakthrough that saved countless lives and led directly to the launch of the $500 billion global biotech industry.
As a scientist and leader at City of Hope over the next 53 years, Riggs continued to perform groundbreaking research and make major contributions across the life sciences. His 1975 paper on mammalian epigenetics — how behaviors and environment can cause changes that affect the way genes work — remains one of the most frequently referenced on the subject. It was one of more than 200 scholarly papers on which he is an author, in addition to holding 20 patents. He was recognized for this lifetime of achievements by his election to the National Academy of Sciences in 2006.
“Arthur Riggs is one of the scientific giants of the age and should be a household name for his contributions to diabetes alone,” said Robert Stone, president and CEO of City of Hope and Helen and Morgan Chu Chief Executive Officer Distinguished Chair. “His research also led to the development of monoclonal antibody therapies that today treat cancer and other diseases. His amazing scientific accomplishments go far beyond one condition, though, both in his own work and in that of the dozens of talented researchers for whom he was a devoted mentor. City of Hope today owes an enormous debt to him, as do countless people whose lives have been changed by his discoveries.”
Arthur Dale Riggs was born on Aug. 8, 1939, to a farming family in Modesto, California. The family soon moved to San Bernardino, where his father, who had given up farming, built and managed a mobile home park. Riggs learned to build and fix things from his father, an inventive and mechanically adept man who once designed and built his own helicopter.
“Helping my father was a great learning experience,” he recalled in an interview in 2010. “But I also remember sometimes telling my father that I had homework to do in order to avoid digging ditches. I would then read science fiction rather than do my homework.”
Riggs’ lifelong passion for chemistry and biology was sparked by his mother, a nurse, who gave him a chemistry set at the age of 10. He also exhibited early the imagination that goes hand in hand with scientific research.