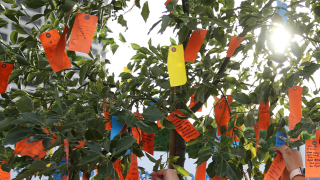 By
Abe Rosenberg
Patient Care
It’s a safe bet that many women are grateful that plastic surgeon Wai-Yee Li, M.D., Ph.D., decided not to pursue her original career choice.
“I loved animals, and I considered becoming a veterinarian,” said Li, recalling her childhood. “But I couldn’t bear the thought of putting an animal down.”
The youngest of four children, Li and her siblings grew up in London, where her parents had emigrated from Hong Kong. Mom and Dad spoke little English, nor did Li until age 5, when she started school. When Li’s grandfather suffered a stroke, chaos engulfed the family.
“It was very confusing for everyone,” she remembered. “My parents didn’t know how to navigate the [UK health care] system.
“It motivated me” to become a doctor.
Wai-Yee Li , M.D., Ph.D.
Today Li is one of Southern California’s leading plastic surgeons performing reconstructive procedures on cancer patients, most notably women who’ve undergone mastectomies for breast cancer or pelvic surgery for cervical and other cancers. It is Li’s job to make the patient “whole” again; to restore and rebuild what’s been lost.
She approaches this work with passion, empathy and meticulous attention to detail, qualities admired by patients and colleagues alike.
“She is a perfectionist and it shows in her work,” said surgical oncologist Heather Player, M.D.
“She works very hard for her patients and cares a great deal about them,” added fellow breast surgeon Veronica Jones, M.D.
Ilyasha Thompson, a clinical research associate, spent eight hours on the operating table as Li repaired and restored her right breast, which had begun to deteriorate several years after a lumpectomy. She can’t say enough about the care she received, and the friend she made.
“Dr. Li is a phenomenal doctor and a really nice person,” she said. “That’s a winning combination.”

During her initial surgical training in England, Li quickly realized she preferred restoration to extraction. She also knew she didn’t want to spend her time doing nose jobs on healthy, wealthy clients. “Those people are already normal,” she said, “and now they want to be above normal.” She found it much more rewarding to help “people who had no choice, and now they want to be just normal.” Originally Li studied pediatric restoration and even volunteered with Operation Smile in China to treat children with facial deformities.
In 2002, Li decided to relocate to Los Angeles and pursue a Ph.D. in wound healing and facial development. This was something of a culture shock (“especially driving on the right side!” she laughed). Six years later, in 2008, she embarked on an additional residency at USC specializing in plastic and reconstructive surgery, where Li faced a new challenge: She was a young mom with two daughters ages 1 and 4.
Even more daunting, though, was the reality of being a foreigner seeking a post in the very exclusive, highly competitive plastic surgery arena. She was a minority within a minority — a woman of Asian descent, raised overseas, attempting to crack a community that is overwhelmingly (more than 80%) male and American-born.
Very few with similar backgrounds make it. Those who do are called “black swans” among plastic surgeons because they’re so rare. But this black swan was made of tougher stuff. Li did make it, and now she mentors international medical students, in addition to trainees in the U.S., who hope to travel that same path. She considers it a “privilege” to guide them through the process, “because I’ve been through it. I feel a responsibility to help them and not let doors close on them like they tried to on me.”
Li feels an equally profound responsibility to her City of Hope patients. She recognizes how vulnerable they are, so she walks them through their reconstruction options, carefully and thoroughly explaining the risks and benefits of each procedure. “When they meet me I’ll show them pictures, diagrams. It’s very reassuring to them. They want to see the formula, know what to expect,” she explained.
It is appreciated.
“She has this kind, soft-spoken, bright personality with lots of positive energy,” said Thompson, one of many happy patients. “She made me feel comfortable. She was very calming, open, upfront, forthcoming and honest.”

Thinking Outside the Box

She’s also an innovator, in and out of the operating room. For mastectomy patients who are not candidates for implants following radiation, Li is resurrecting an older technique called the latissimus dorsi flap in which a section of skin, fat and muscle is taken from the patient’s back and pulled forward to form a reconstructed breast.
Because no blood vessels are divided using this method (as opposed to another popular procedure: removing abdominal fat and transplanting it into the chest cavity), risks are lower, side effects are fewer and recovery time faster. Thompson had this procedure and says the ultimate results were “absolutely fabulous.” Now Li is refining the surgery to be done with post-op pain managed with a long-acting local anesthesia that blocks the nerves in the front and back of the chest, enabling the patient to go home in one day.
For another innovation Li called upon a skill she’d learned from her mother, a seamstress.
Li saw that typical hospital garments made it difficult and painful to inspect surgical wounds, change dressings and insert drains where necessary. Working with her daughter, Li designed a line of specialized garments that solved the problem, providing easy access to those surgical sites and much relief to patients. Her idea became a company that supplies the products everywhere, including to City of Hope.
Now nearing a decade at City of Hope, Li enjoys and praises the unique atmosphere on campus.

“I love working at City of Hope,” she said. “All the doctors here are so collaborative. Cancer is such a stress on people, but City of Hope helps you navigate through it because the doctors all speak to each other. That means patients get the total package all organized for them, and I get so much information from my colleagues before I even meet a patient. It really helps me a lot going into the room.”
When not working Li says she relaxes by traveling, cooking, baking or playing Scrabble with her family. Her friends reveal a bit more, describing how Li also loves to paint, and has “a wicked British sense of humor.”
One colleague, fellow surgeon Mike Chen, M.D., Ph.D., M.S., pays the ultimate compliment:
“She is an outstanding doctor who I would send my family members to.”