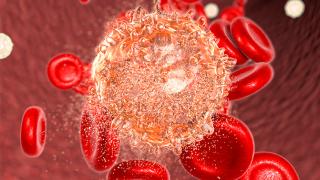 By
Maxine Nunes
Patient Care
At 15, Tyus Munford has an open, friendly way about him, and his love of life and ease with people is apparent. A high school sophomore, he says it’s pretty cool to be back in school, playing trumpet in the band and hanging out with friends.
He was also born with sickle cell anemia — a disease that could have made that normal teen life almost impossible.
In the U.S., this genetic disease primarily affects African Americans, as well as some Hispanics. It creates a sickle-shaped mutation in red blood cells that makes them rigid, hampering the flow of blood and depleting the organs of oxygen until, eventually, they fail.
“Sickle cell anemia is a cruel disease,” said Tyus’ physician, Anna Pawlowska, M.D., a pediatric hematologist and oncologist at City of Hope. “People with this disease can have progressive organ damage, a higher risk of infection, and pain so severe it can require hospitalization. And there is often a risk of stroke, even in children.”
Tyus was diagnosed shortly after birth, but for a long time he seemed to be one of the lucky ones.
Anna Pawlowska, M.D.
“Sickle cell anemia didn’t take charge of his life the way it does for a lot of children,” said his mother, Dee Munford. “He looked like the average kid, running around playing. He wasn’t sickly, he didn’t get a lot of colds, he never seemed to get winded. It was almost like the diagnosis didn’t match his behavior.”
Still, his parents took their doctor’s advice and monitored him carefully. Playing in the heat, for example, could cause a blood pressure spike, while swimming in cold water can could creaate a severe pain crisis.
Despite these restrictions and a few episodes of pain that required brief hospitalizations, Tyus was able to lead a pretty normal life. Then, when he was about 8, he developed pneumonia.

After his bout with pneumonia, Tyus developed acute chest syndrome, one of the most serious complications of sickle cell disease, in which blood circulation is cut off from the lungs.
He was given a drug called hydroxyurea to control his sickle cell disease and stem the lung damage. He remained on it for a few years, but despite the medication, his lung damage continued to progress.
His doctor recommended a bone marrow transplant. It was the only proven cure for sickle cell disease, though it could not reverse the existing lung damage. The Munfords were referred to City of Hope, where they met with Pawlowska.
“At the time I first saw him, he was about 12, and a very delightful boy,” said Pawlowska. “On an everyday basis, he didn't have a lot of symptoms, but when we measured his lung function it was at 50%.”
Tyus Munford was diagnosed shortly after birth.
Over the course of several meetings with Tyus and his parents, she explained in detail what a bone marrow transplant would involve — the advantages as well as possible side effects and problems that could arise.
“Some of those meetings were like listening to those infomercials that have a long list of side effects, and you think, 'Gee, why would I ever want to take this medicine?,'” said Munford.
But they had to consider it — or Tyus’ lungs would continue to deteriorate.
The Munfords wanted Tyus to be involved in the decision-making process, and at home they sat down with him for an in-depth conversation.
“We went over the details with him using very easy, down-to-earth terminology. Then we asked him what he thought,” Munford said. “We were pretty sure he’d say he was scared and didn’t want to do it.”
Instead, they were floored when he told them he wanted the transplant.
“I just felt, let’s get this over with so I can go back to my normal life,” Tyus said.
To help the family finalize their decision, City of Hope introduced the Munfords to a mentor family, whose daughter had had a bone marrow transplant.
“We had a long conversation by speakerphone, and they were very warm and open. Tyus was there and their daughter would chime in to share some of her experience,” Munford said. “They made themselves available throughout the whole experience, and they were incredibly helpful.”

Tyus Gets His Bone Marrow Transplant

Blood cells are produced in the bone marrow, and in a bone marrow transplant, the patient’s marrow is replaced by healthy marrow from a donor.
The ideal donor would be a full match for human leukocyte antigens (HLA). Often this is a family member, but failing that, a donor might also be found in the National Bone Marrow Registry.
Often, the best donor a sibling, but in this case Tyus’s older brother Cameron wasn’t an HLA match. Instead, his father Shannon was chosen as donor, though he was only a half-match.
“With the half-match, there is a higher risk of rejection and of graft-versus-host disease,” said Pawlowska. “But the protocol we have here at City of Hope, which uses a special type of chemotherapy called cyclophosphamide, provides good protection from these things happening.”
On Jan. 23, 2019, Tyus had his bone marrow transplant — and it was a success.
At least, at first.

“Initially he engrafted very nicely, and he was discharged home,” said Pawlowska. “But then he got a BK virus infection.”
The BK virus commonly exists in many people, but usually remains latent. However, in bone marrow and organ transplant patients, whose immune systems are temporarily weakened, it can lead to a serious infection.
Tyus was given cidofovir, an antibiotic that specifically targets certain viruses, including  BK. But the treatment didn’t work.
He lost the graft.
Both physically and emotionally, it was hard on him.
“All I remember is being really tired. I didn’t want to do anything. I didn’t want to get up. I didn’t want to talk to anybody,” he said. “I was missing all the fun stuff my friends were doing, but I just wanted to stay in bed or be on my phone.”
Pawlowska recommended doing a second, “rescue” stem cell transplant, once again with his father as donor, a procedure that would be far less invasive.
When Tyus was told he’d need another procedure, “Gosh, I just cried, to be honest,” he said.
It was challenging for the rest of the family, too.
“We just had to get the strength from somewhere beyond ourselves to see this through for the second time,” said Munford. “We prayed, and had people praying along with us, It was really a concerted effort among what you might call the village of people you know and love — our family, our church family, my co-workers, my husband’s co-workers.”
On July 3, six months after his bone marrow transplant, Tyus had a peripheral blood stem cell transplant. This time, all went well.

“Two years post transplant ... whoo hoo!” Munford recently wrote to Pawlowska. “The process was not as smooth as hoped, the journey to recovery was long, but the results are wonderful. We are grateful to the entire City of Hope team.”
The Munfords also met their mentor family in person for the first time and enjoyed lunch outdoors together.
“We wanted to thank them for their continuous support during our tough time and beyond,” Munford said. “As moms, we prayed for each other, which was very nice.”
July 3 now marks a special Independence Day for Tyus, and he’s excited about the future.
“After high school, I plan to go to college and major in aerospace engineering,” he said.
His dream is a career with Space X, Boeing or NASA — and there’s every reason to think he’ll achieve it.