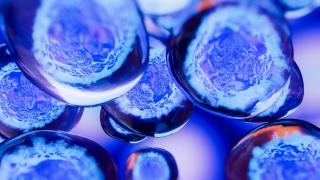 By
Maxine Nunes
Patient Care
Research
“If we can land the Mars Rover at a precise location millions of miles away, we should be able to land a drug inside our body at the exact location of a cancer.”
That’s the vision that drives Nagarajan Vaidehi, Ph.D., chair of the Department of Computational and Quantitative Medicine at City of Hope.
Nagarajan Vaidehi, Ph.D.
She’s leading the exploration of a new frontier in cancer care, one that relies, as NASA does, on mathematicians, engineers, physicists and artificial intelligence experts. Her department has four divisions: Biostatistics, Health Analytics, Informatics and Mathematical Oncology.
The Vaidehi Lab has already made some exciting breakthroughs. Thanks to a study published last year in Proceedings of the National Academy of Sciences of the United States of America, Bristol-Myers Squibb and Boehringer Ingelheim are now creating a new generation of medications that will greatly reduce the side effects of opiates and medications for high blood pressure, type 2 diabetes and many other diseases.
This year, two high-profile studies have been published in Nature, and Ning Ma, Ph.D., a fellow in Vaidehi’s lab, was instrumental in both. Four more papers are currently in review.

How This Unique Department Works

A key component of the department’s work is integrating and analyzing big data, using vast quantities of information drawn from a multitude of sources, ranging from the genomics of tumor tissue to the anonymously collected details from individual patient records.
This data is an important element in developing better pharmaceuticals.
“Genomic data can show us how RNA translates into proteins and mutations that may cause cancer, paving the way for new, highly targeted drugs with fewer side effects,” Vaidehi said.
Physics plays a key role, too, allowing researchers to create models of how cancer cells behave in a crowded environment of proteins, DNA and lipids.
“Just as Newton’s laws of motion simulated and predicted the movements of planets around the sun, based on their mass and the gravitational forces between them,” she explained, “by using the same laws, you can calculate the forces between atoms in a protein and its environment and see how, in time, they change their three-dimensional shapes.”
Not only is this work important in developing new drugs, it’s also having a major impact on personalized medicine.
By analyzing big data from a vast number of patients, along with medical and genomic data from an individual patient, we can predict how a type of therapy will affect that patient’s outcome, helping doctors make more informed decisions about the right course of treatment.

A Breakthrough in B Cell Acute Lymphoblastic Leukemia

On Nov. 4, the international, peer-reviewed journal Nature published a paper by Markus Muschen, M.D., of the Yale School of Medicine, in collaboration with Vaidehi. Their study paves the way for a breakthrough in the treatment of B cell acute lymphoblastic leukemia.
They discovered that the protein IFITM3 plays an important signaling role in the progression of B cell leukemia and lymphoma, a novel functional role for IFITM3 that had only been known for protecting the B cells from viral infections.
“Now that we have identified the target protein, we will look for small molecules that inhibit this protein or other proteins in the signaling pathway of activated IFITM3,” she said. The Nature reviewers called the study “an encyclopedic piece of work,” a significant leap forward on the path to an effective, highly targeted drug for this disease.

Solved: A Mystery About a Yeast Protein

Another paper, published in Nature in December, was a collaborative effort with Christopher Tate, Ph.D., of the Medical Research Council Laboratory of Molecular Biology in Cambridge, England.
This study solved a mystery about the structure of a yeast protein, GPCR Ste2, that is used as a model for replicating many diseases, especially neurodegenerative diseases. In the Cambridge lab, crystallographers had used cryogenic electron microscopy to reveal the structure of this protein — but one part of the protein was missing from the picture.
“It was like looking at a photograph of a person, where the head was blurred and you couldn’t see it clearly,” Vaidehi said. “So we modeled it and showed what it should look like, helping them solve the full structure of that protein.”
This will be useful not just for creating anti-fungicides, but to use as a model system for developing treatments for other diseases as well.

And Four More to Come …

One study, in collaboration with the University of North Carolina in Chapel Hill, focused on G proteins, which act as switches, transmitting signals from the exterior to the interior of a cell.
Computational methods were used to explain how G proteins are activated in cellular conditions. What is most exciting about this study is that it proposes a universal mechanism of activation that can help develop more effective, less toxic drugs for a multitude of diseases.
Three more papers are currently in review for publication, based on a new computational method that can take any amino acid and map the pathway of information transmission from outside the cell to inside the cell.
“These signaling proteins are a little like cellphone towers,” Vaidehi said. “If information has to be transmitted from Boston to L.A., we need an algorithm to figure out a how many towers have to be built along the way for the fastest communication.”
Using the same mathematical methods of analysis as a telephone company, her team is working with algorithms and simulations to identify which amino acids in a protein are involved in transmitting the signal from outside the cell to inside the cell.
“As a result, we not only know that a certain protein in a cancer cell has mutated, we can determine the signals that caused it and create drugs to hamper them,” she said.
She is particularly interested in G protein-coupled receptors, which she described as the largest superfamily of drug targets in the human system.
Vaidehi refers to these studies as “basic science,” but they are by no means simple. They are the groundwork upon which an entirely new generation of highly targeted, minimally toxic treatments can be created.