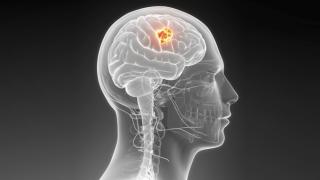 By
Katie Neith
CAR T
Research
Glioblastoma is an aggressive cancer of the brain. To add to the challenge, it is in a difficult location to treat because it is protected by the blood-brain barrier, a layer of highly selective cells that is nearly impossible for most cancer therapies to get through.
At City of Hope, researchers have seen promising results when using CAR T cell therapy — a type of immunotherapy that uses a patient’s own reprogrammed cells to attack tumors — to treat glioblastoma. Now, a recent paper published in JAMA Oncology shows that a programmed cell death protein 1 (PD-1) checkpoint inhibitor, which is a drug that promotes an immune response against cancer cells, could potentially enhance the efficacy of CAR T cells when the two are combined.
PD-1 is a type of protein complex found on T cells that engages with a regulatory molecule found on tumor cells, leading to inactivation of T cells. This is one of the ways that tumor cells are able to hide from or evade the immune system. PD-1 inhibitors, such as pembrolizumab, block the PD-1 receptor, in effect reactivating T cells, a type of white blood cell that helps the body fight infections and cancer.
Christine Brown, Ph.D.
The study, led by Christine Brown, Ph.D., The Heritage Provider Network Professor in Immunotherapy, along with Jana Portnow, M.D., associate director of City of Hope’s Brain Tumor Program, had a primary aim of measuring how much pembrolizumab gets to the cerebrospinal fluid when administered via a vein. Until now, it was unknown how much pembrolizumab is present in cerebrospinal fluid and whether that amount is enough to block PD-1 on T cells present in the cerebrospinal fluid.
“Glioblastoma is an example of a type of tumor that is not as responsive to immunotherapy as others, so it's been a challenge,” said Brown, who is also deputy director of the T Cell Therapeutics Research Laboratory at City of Hope. “And even though there's been unique responders, checkpoint inhibition hasn't achieved the promise that we were hoping for in glioblastoma.”
But by examining cerebrospinal fluid and blood samples from 10 glioblastoma patients enrolled in clinical trials in which they received CAR T cells plus pembrolizumab, the researchers were able to report for the first time what the concentrations are of pembrolizumab in cerebrospinal fluid after intravenous administration.
“Although we found that pembrolizumab gets into the cerebrospinal fluid in very small amounts — only about 1% of the concentration in blood — Dr. Brown’s lab then did a series of elegant experiments to show that these low cerebrospinal fluid concentrations of pembrolizumab are still sufficient to block PD-1 on T cells and CAR T cells and activate them there,” said Portnow.
These data are significant because pembrolizumab is a monoclonal antibody, which is a relatively large-molecule drug that does not readily cross the blood-brain barrier. Now it appears that PD-1 antibodies may not need to even cross the blood-brain barrier to exert an effect in the brain, since activated T cells are able to get into the brain from the cerebrospinal fluid.
In other words, although the PD-1 inhibitor is administered in the blood, the study has shown that when even a small amount of it crosses into the cerebrospinal fluid it can activate T cells and CAR T cells, which can then travel into the brain to attack cancer cells there.
“This paper really is critical because it provides data to help us improve immunotherapeutic approaches for glioblastoma,” Brown said. “We showed that there were levels of pembrolizumab in the cerebrospinal fluid that were bioactive, that they actually could block this negative regulator of the immune system, both on endogenous T cells and CAR T cells. It also provides rationale for what we're doing now, which is a combination of intravenously administered checkpoint inhibitors with CAR T cells that are delivered directly into the brain and cerebrospinal fluid.”
“There have been some important studies recently that haven't shown patient responses to antibodies like pembrolizumab, and no one knows why they're not working,” Brown added. “So in order to make them work better and in conjunction with CAR T cells, we have to understand a little more about how they're functioning.”
The work was the result of collaborative, multidisciplinary efforts that involved numerous City of Hope researchers and clinicians, including senior authors Dongrui Wang, Ph.D., who earned his doctoral degree last year at City of Hope’s Irell & Manella Graduate School of Biological Sciences and was a member of Brown’s laboratory, and Timothy Synold, Pharm.D., professor and director of the Division of Molecular Pharmacology and director of the Analytical Pharmacology Core.
“This paper is a great example of various expertise all coming together to answer important questions,” Brown said. “It’s team science and wouldn't be possible without all contributors.”