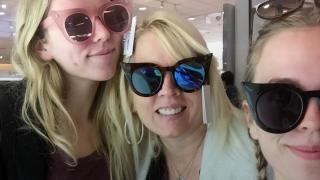 By
Jenny Peters
COVID-19
The fear of contracting COVID-19 over the last year has caused many people to delay doctor visits. But when your body shows a marked change, overcoming those fears just might save your life. “I know how important it is to get checked, from firsthand experience," said Kellyanne Profeta, a City of Hope patient currently undergoing intensive chemotherapy for a rare cancer.
"Because of COVID-19, I didn't want to go to a hospital or see a doctor," she continued. "I thought I had an ingrown hair in my armpit. And I'm like, ‘OK, I'm going to put compresses on it and let it work its way out. It should be gone in a couple weeks.’”
Only later did Profeta realize that there was something clearly wrong with her body. "My story really is a cautionary tale," she said. "I have no history of cancer, or cancer in my family. But within a couple of weeks, the lump went from the size of about a quarter to covering my entire armpit and extending across the front of my chest and some parts of my back.”
Finally, she went to urgent care, which recommended an MRI. Next came the challenge of trying to schedule it. Meanwhile, the growth in her armpit grew so large she couldn’t lower her arm completely, and it was extremely painful. That drove her to the ER at Adventist Health Simi Valley Hospital, where a physician quickly ordered an MRI and biopsy. Those tests resulted in the shocking diagnosis of Stage 4 Burkitt lymphoma, a rare and very aggressive form of non-Hodgkin’s lymphoma, for the 57-year-old operations manager and mother of two.
Profeta immediately turned to City of Hope and hematologist-oncologist and lymphoma specialist Liana Nikolaenko, M.D., for her treatment.

City of Hope's Adaptation to the Pandemic

Nikolaenko, an assistant clinical professor in the Department of Hematology & Hematopoietic Cell Transplantation, emphasizes how important it is for people to continue to have cancer screenings and to see a physician if anything unusual occurs. "It's so important to get things checked out sooner rather than later," she said. "If it's nothing, it's not a big deal. If it is caught early, we can treat it safely. Here at City of Hope, we adapted quickly to the pandemic. We implemented a lot of changes in order to be able to continue to deliver care to our patients."
She explained that those changes include screening all staff and patients prior to entering the facilities, using phone and video consultations for some visits with physicians, a careful triage system for patients potentially infected with COVID-19 and numerous other safety protocols.

A City of Hope Success Story

In Profeta's case, Nikolaenko had to be as aggressive as her patient's lymphoma had proved to be, which meant immediate chemotherapy treatments requiring her to remain hospitalized for five days at a time. "For her, it was something that was changing every single day," Nikolaenko recalled. "The treatment is a multidrug immunochemothrapy regimen, given every 21 days. Treatment-related toxicities can be serious and require intense monitoring of patient’s bloodwork several times per week after discharge from the hospital. In between, we also implement additional treatments for preventive measures, including a weekly spinal tap. The goal is cure.”
Liana Nikolaenko, M.D.
When Profeta began her treatment in early December 2020, the lymphoma had already caused incredible damage to her body. "The initial results showed cancer in my lymphatic system, my lungs, my liver and my kidney," she said. "But after my first treatment with Dr. Nikolaenko, on the program that she devised for me, my kidney was pretty much clear, my liver was pretty much clear and my lungs were clear. I just had the mass underneath my arm, which had already shrunk in half."
By late March 2021, Profeta was almost cancer-free. "It's really remarkable that right now it's less than 25% of what it was when I got to City of Hope,” she said. “Dr. Nikolaenko attacked my cancer very aggressively, but she knew exactly what she was doing."
Profeta is, not surprisingly, now a staunch advocate for early detection. "Had I gone [to the doctor] when it first happened, my outcome may have been different. I may not have had to go through all of this treatment,” she said. “If I had waited any longer, it probably would have been deadly.”
And she is also a huge proponent of City of Hope. "City of Hope is doing an absolutely remarkable job to protect all of their patients from COVID-19 and to make sure that everyone gets great care. They're doing such an incredible job just keeping everyone safe."
And while she is not quite out of the cancer woods yet, Profeta is ready to do exactly what her physician prescribes, in a timely manner. The great news is that she has a chance of her cancer being completely cured; while aggressive, Burkitt lymphoma responds well to treatment.
"We still have to watch, when we do achieve full remission," Nikolaenko said. "Patients are still at risk for cancer coming back. We will be monitoring Kellyanne very closely. And she is now educated on what to look for. She knows to let me know. Here at City of Hope, we're involved in our patient care very closely, even after chemotherapy is completed, to make sure that they stay in remission."