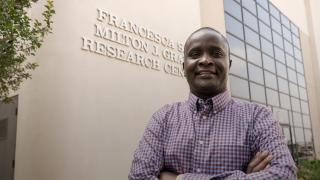 By
Maxine Nunes
Research
“It’s not HIV that kills you, it’s the co-infections that do,” said Javier Gordon Ogembo, Ph.D., associate professor in the Department of Immuno-Oncology at City of Hope.
Among the deadliest of these infections is Kaposi sarcoma-associated herpesvirus (KSHV), the causal agent of Kaposi sarcoma, which is considered a defining cancer of HIV, although not every case is associated with it.
JavierÂ Ogembo, Ph.D.
Kaposi sarcoma develops in the lymph nodes or blood vessels, and can metastasize to other organs, such as the lungs or digestive tract. It is characterized by highly visible purple lesions or tumors on the skin.
There are still a significant number of HIV cases here in the U.S., and organ transplant patients are also among the most susceptible to developing Kaposi sarcoma. Yet, as we’ve seen during the current pandemic, viruses know no borders. KSHV is widespread in the Middle East, parts of Europe and South America, as well as Africa, where it has infected 30-60% of the population.
For Ogembo, who grew up in Kenya, the disease has had a personal impact on his life and career.
“Many of my family members and friends died of HIV,” he said. “It’s a disease that’s very much stigmatized, and while you can hide HIV at the early stages of infection, you can’t hide Kaposi sarcoma.”
These experiences fueled his interest in virology and particularly in DNA viruses, a group that includes herpes viruses. His studies took him to Japan for his doctoral education and eventually to the U.S., where he completed his postdoctoral training at Harvard Medical School.
Ogembo has just received two grants, one from the National Cancer Institute and one from the National Institute of Allergy and Infectious Diseases, totaling $5 million, for studies that are expected to map the entry mechanism of the virus with a goal of developing the first vaccine for KSHV.

Before being awarded these grants, Ogembo’s lab had already made progress on understanding how KSHV enters a cell.
In a previous study, they had discovered one critical entry mechanism, a protein on the surface of the virus called glycoprotein H (gH). But at least three other glycoproteins are also known to play a role: gB, gL and gpK8.1.
In order to definitively map out the KSHV entry mechanism, here’s how they’ll proceed.
Using a recombinant virus, one that can be modified, researchers will knock out one of the glycoproteins, then test whether a cell can be infected without it. This will allow them to determine, by a process of elimination, which ones are required for access to the cell.
Once this groundwork has been thoroughly completed, they can begin creating a vaccine.

“COVID has given us an analogy with a virus that everyone knows, the SARS-CoV-2 virus,” Ogembo said. “They had to identify the spike protein that was required to interact with the cell. Unfortunately, with KSHV it’s more complicated.”
SARS-CoV-2 needs just a single spike protein to infect a cell, and variants occur when that one protein mutates. But with KSHV, multiple proteins are required to successfully invade the cells. This means that a special platform is needed to deliver a vaccine.
One method of vaccine delivery uses virus-like particles, molecules that resemble viruses but have no genetic material and cannot cause infection. Ogembo holds the patent for a unique virus-like particle platform — the only one that can incorporate more than three glycoproteins.
The other vaccine strategy they are looking into involves the characterization of KSHV antibodies in individuals who have been naturally infected with the virus.
Lorraine Mutsvunguma, Ph.D.
One of Ogembo’s team members, staff scientist Lorraine Mutsvunguma, Ph.D., received an AIDS and Cancer Specimen Resource Young Investigator Pilot Award to isolate potent neutralizing antibodies against KSHV from naturally infected individuals. The hope is that this information can be used for the future rational design of KSHV vaccines.
Ogembo’s virus-like platform is already being used to develop a vaccine for a disease that’s closely related to Kaposi sarcoma, the Epstein-Barr virus, which needs five proteins to invade a cell. They are currently planning Phase 1 clinical trials, which should pave the way for KSHV vaccine trials.
“If the work with Epstein-Barr goes well, translating it to the KSHV trials should go very quickly,” he said. “We are hoping that a Phase 1 clinical trial can begin in three to four years.”
Required*