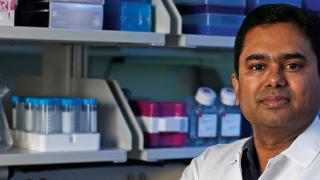 By
City of Hope
Diabetes
Research
Sampath Rangasamy, Ph.D. (right) with the man who inspired him, Arthur Riggs, Ph.D.
Growing up on a farm in rural India, Sampath Rangasamy, Ph.D., practiced every morning for his beloved cricket matches.
Then, in seventh grade, he dropped 10 pounds from his lanky frame within a week. Insatiably hungry and thirsty, he started urinating frequently.
Two weeks later, he slipped into a coma. His father rushed him to the hospital on the back of his motorcycle.
“The diagnosis of type 1 diabetes was very devastating for my family,” explained Rangasamy, now a research assistant professor at TGen, an affiliate of City of Hope. “In Asians, type 1 is a rare disease, compared to Caucasians, and there is even a little taboo around it. In my community, the doctors had never seen it.”

The young Rangasamy set out on a lifetime crusade against the disease that would define his career but not his character: He sent letters to the British Diabetes Association (BDA) to request educational pamphlets in the mail.
He made “pen friends” with patients in Europe, whom he found through the BDA magazine. Though his family did not want to share the news of his diagnosis due to stigma, Rangasamy wanted to learn as much as he could.
“My doctor had trained in the U.S. and wanted to serve in a rural community — and that was the biggest thing for me because he not only treated me, he also educated me and, in turn, I tried to educate him, and my school friends and my school teachers,” Rangasamy explained. “In two years, I thought I was an expert in type 1 diabetes.”
In 1985, in rural India, Rangasamy self-administered up to four animal insulin shots daily in his legs, using a glass syringe with a steel needle that he sterilized every time. The family did not have a glucose meter, so his mother boiled Benedict’s solution with his urine to determine his glucose levels by sight. Rangasamy had an allergic reaction to the animal insulin, which caused lipoatrophy, or a localized loss of fat tissue, that left behind scars he carries to this day.

The Man Behind His Motivation

“When I finished high school, I went to a big town in India to talk to a specialist in diabetes, and I learned that there were disposable syringes and testing strips and recombinant human insulin,” he said. “After that, I started taking recombinant insulin and didn’t have an allergic reaction. It gave me more control. This motivated me to research diabetes.”
Last year, Rangasamy met the man behind his motivation, Arthur Riggs, Ph.D., Samuel Rahbar Chair in Diabetes & Drug Discovery and director of the Diabetes & Metabolism Research Institute at City of Hope (pictured on left at top). Riggs was renowned for his work on synthesizing the first man-made gene and using synthetic genes to produce human insulin, work that transformed Rangasamy’s life more than 30 years ago and sparked his career in diabetes research.
In September, the National Institutes of Health (NIH) awarded a $2.8-million grant to a consortium led by TGen and University of New Mexico in a groundbreaking effort to discover new treatments for diabetic retinopathy, one of the primary complications of both type 1 and type 2 diabetes and one of the leading causes of blindness in America, affecting as many as 24,000 patients each year. Rangasamy is the study’s principal investigator at TGen.
“Diabetic retinopathy, with loss of vision, is a serious, common and debilitating problem associated with the complications of diabetes,” Riggs said. “This study is an exciting approach to understanding the molecular and genetic mechanisms involved, and it makes use of the extraordinary technology and expertise available at TGen and City of Hope.”

Hope for the Future

The study will use genomic sequencing to identify genes associated with the condition and establish a molecular profile that can predict the severity and treatment of the disease for each patient.
“Why does this occur? Is it because of high glucose or is there a genetic factor that plays a role? Why is it that some people get this complication early despite having good control of their diabetes, while others are not compliant with care but don’t get these complications for a long duration?” asked Rangasamy. “We need to look at specific factors that protect against or predispose patients to developing this complication. Every two years, I have to go for a diabetic retinopathy check, so I am very focused and excited to identify those factors.”
As a teen, Rangasamy was discouraged from playing cricket due to stigma associated with type 1 diabetes. As a young man, his parents feared he might not be able to marry if he disclosed his condition, or he might die if he left India to continue his studies in the United States. Though the taboos of his home country have faded, he still battles very real effects from the disease.
“Even with an insulin pump and a continuous glucose monitor, I have to put in an extra two hours each day to take care of myself,” he said. “I am prone to infections. I have to get flu and pneumonia vaccinations without fail. So far, I don’t have any recognizable complications — I have pretty good control — but for people with long duration, there is always some complication, and so I am always anxious.”
But Rangasamy is also hopeful to see how his work can contribute to the legacy of leadership in diabetes research at City of Hope.
In 2017, City of Hope announced The Wanek Family Project for Type 1 Diabetes. This ambitious project seeks to reawaken insulin-producing cells and to harness immunotherapies to cure the disease.
“After living with type 1 for a long time, it is very important for me to have a cure,” Rangasamy said. “Even though I am a scientist and I know it may take a long time, I am dreaming for a day when I can have a cure and have a normal life.”
****