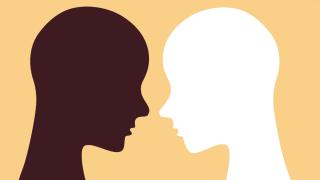 By
Abe Rosenberg
Diabetes
Research
It’s a safe bet that John S. Kaddis, Ph.D., begins his day a whole lot earlier than many of us.
“At every out-of-town conference,” said Joyce Niland, Ph.D., who chairs City of Hope’s Department of Diabetes & Cancer Discovery Science, “he’s up at 3 a.m., out on the road for a run.”
Not just a run.
Kaddis, an associate professor in Niland’s department, is an experienced marathoner who isn’t satisfied with a mere 26.2-mile short hop. He runs ultramarathons. The 50-mile kind. He does triathlons. He has competed in Ironman events:  a 2.4-mile swim, a 112-mile bike race and a full marathon, in that order, all in one day.
He says the discipline (“hard-headedness,” he calls it) required for such physical feats also comes in handy in his chosen area of research: delving into the complex mechanisms of type 1 diabetes, as well as devising scientific resources, data systems and analysis tools for research initiatives.

Few handle this seriously complex work better than Kaddis, possibly because deep down, he takes it personally. He was exposed to both type 1 and 2 diabetes at an early age: both parents, as well as friends, struggled with one form of the disease or another. Ask him about his motivation and he’s disarmingly clear: “It’s for the people I know,” he says. “I want to be able to go to them and say, ‘Here! I’ve got a cure for you.’”
It may not be a cure, but Kaddis’ most recent discovery could potentially improve thousands of lives, especially in the African American community.
John S. Kaddis, Ph.D.
In a paper published in the journal Diabetes Care by the American Diabetes Association, Kaddis calls for major changes in a critical tool known as the Genetic Risk Score. The GRS model identifies variances in a person’s DNA profile (specifically, it analyzes single nucleotide polymorphisms, or SNPs; a typical genome contains millions of them) to determine if an individual has certain inherited genetic mutations that indicate a high risk for type 1 diabetes.
Though not yet the universal standard of care (it’s far more common to assess risk by measuring blood sugar and antibodies and evaluating family history), the GRS is leading-edge technology that can provide an important early warning to many people, and may help to distinguish between different forms of diabetes.
But there’s one glaring exception.
As currently constructed, the GRS is virtually useless in identifying high risk in those of African descent; it may even do more harm than good, Kaddis says.
“A lot of what we know about type 1 diabetes comes from data derived almost exclusively from individuals of European descent,” he explained. This data formed the basis for the GRS most commonly in use. It’s effective for the population from which it was created. But that may be as far as it goes. “We are challenging the notion that one size fits all.”
Kaddis and his team proved their point by applying the standard “European” GRS to a diverse group of 377 patients. The results were eye-opening. The European GRS did a fine job of identifying self-reported white individuals at high risk of diabetes. But it failed to spot high risk among those identifying as African Americans. “In those of genetic African descent, we could not distinguish between people at high risk and those with no risk,” Kaddis said.
That’s more than an unacceptable gap, he said. It’s a danger signal. As his paper states:
“Disease risk models that do not account for the diversity in populations hinder the comparability between studies and may even increase health disparities.”

In other words, says Kaddis, “If you test blindly, and you miss a group, like African Americans, you are falsely pushing aside people who may in fact be at high risk.” Those people will never take any proactive or preventive measures because, based on their GRS results, they may mistakenly believe they’re in the clear.
The remedy, says Kaddis, is to redo the GRS to account for genetic ancestry.
Researchers already know that about 30 of those genetic SNPs point to type 1 diabetes risk in European populations. But they have also identified an additional seven SNPs that do the same for those of African descent. When researchers switched to this so-called African GRS, it did catch type 1 diabetes risk in African American people. Not only that, it was effective in identifying risk among whites as well. “It’s an inclusive GRS model,” emphasized Kaddis.
Kaddis urges his colleagues to fight the assumption that the European GRS works everywhere. It’s simple common sense. “When we write our studies, we need to define which populations they apply to.”
Kaddis did not come to this realization overnight. Years ago, he began to suspect something was wrong with the conventional clinical trials process, which typically tested new drugs on young, healthy people in order to check for safety. Diversity was not considered a priority, nor was including those patients who would benefit the most from the drug.
Not surprisingly, he says, many trials failed to reach the hoped-for results. He cites one extreme example from a decade ago: a biologic called abatacept tested as a possible means to delay or prevent type 1 diabetes. “In the analysis after the trial,” he explained, “not only did the drug not help the nonwhite participants, it accelerated their disease. That’s huge! That’s major!” It led Kaddis to ask, “Is our door too open or too closed?” when it comes to designing clinical trials.
He’s carried that sensitivity ever since, and it’s on full display in his work with GRS. And he’s not alone.

“He’s an exceptional scientist and investigator, and he’s on the right track,” said Niland, the Estelle & Edward Alexander Chair in Information Sciences. “Models are based on the info you feed into them. If it comes from just one group, then the model should apply to only that group. Everybody is now taking this path.”
City of Hope has significantly expanded its research efforts and clinical trials to account for diversity and to pay more attention to “social determinants” of health like one’s personal environment and life experiences.
Still, Kaddis understands that persuading the medical/scientific community to dramatically alter a tried-and-true model is a daunting challenge. But this veteran marathoner knows he’s racing in the right direction and he’s determined to go the distance, using “persistence, going on despite insecurities, putting one foot in front of the other.”
And he sees the finish line, as his paper concludes:
“The biomedical research community needs to specify to which ancestries their study applies and take into account any admixture that may exist. Indeed, the progress we make will be measured by the value it brings to the lives of the patients we serve.”