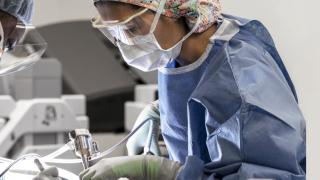 By
Maxine Nunes
Research
Irene van der Heijden has a type of cancer that is incurable, inoperable and notoriously resistant to chemotherapy — low-grade serous ovarian cancer with carcinomatosis of the peritoneum, a thin layer of tissue that lines the abdominal organs.
Over the last four years, she had exhausted — and was exhausted from — multiple lines of chemotherapy and hormone therapy. She’d even gone to Arizona for a microdosing cocktail of seven different types of chemo. Yet despite this bombardment with treatments, she couldn’t control the cancer for long. What’s more, she had also developed a cancer-related condition called ascites, a buildup of fluid in the abdomen.
“We would try one type of cancer drug after another, and finally the doctors told me, ‘We think the next step is City of Hope. See what they have in the hopper,’” said van der Heijden.
Thanh Dellinger, M.D.
It turned out there was something in that hopper — a trial specifically designed for peritoneal carcinomatosis. The treatment is called PIPAC, short for pressurized intraperitoneal aerosol chemotherapy. It was originally developed in Germany, and trials in Europe and Asia over the last several years have shown the treatment’s safety and efficacy.
The PIPAC trial at City of Hope — the first in the United States — is being led by principal investigator Thanh Dellinger, M.D., gynecologic oncology surgeon.
Van der Heijden was excited to try the new treatment. “I had read about a trial they conducted in Europe several years ago, and I was considering flying to Europe to see if I could participate in a trial in France,” she said.
She enrolled in Dellinger’s trial and is having excellent results with far fewer side effects than traditional chemotherapy.

Peritoneal carcinomatosis can metastasize from any of the abdominal organs. In van der Heijden’s case, it’s ovarian cancer, but it can also stem from uterine, gastric, colorectal or appendiceal cancers.
The tumors are extremely small nodules that can proliferate to such an extent that surgery becomes impossible. And IV chemotherapy has proved a poor alternative.
“The disease is very difficult to treat with traditional intravenous chemotherapy because it’s hard to get to those areas inside the belly that are on the surface of organs, and they are not well vascularized,” Dellinger explained. “PIPAC delivers the chemo directly into the abdomen so that it actually touches the surface metastases.”
The minimally invasive treatment employs a standard technique used in diagnostic laparoscopy, in which carbon dioxide gas is directly introduced into the abdomen, creating pressure that elevates the abdominal wall and creates spaces around the organs. PIPAC employs a nebulizer pen connected to a high-pressure injector to drive an aerosolized form of chemotherapy deep into the abdominal crevices. The organs bathe in this mist for half an hour, then the droplets are vacuumed out.
The procedure takes approximately 90 minutes, followed by an overnight hospital stay. Trial patients will undergo the procedure every six weeks for up to six cycles.
PIPAC also provides a unique opportunity for research. During each PIPAC procedure, surgeons can use laparoscopy to obtain tissue biopsies. Researchers can then study the tumors on a molecular level to identify how tumors change and evolve or respond throughout the treatment cycles. Specifically, they will analyze the tumor microenvironment, and perform genomic and transcriptomic sequencing. It’s information that’s vital to developing more advanced personalized and targeted treatments.

For van der Heijden, the trial has been a major success.
“Irene’s CT scan showed a greater than 10% reduction in her tumor nodules,” said Dellinger. “What’s more, after just a couple of cycles of PIPAC, the ascites disappeared and has not returned.”
Her latest test results also showed a significant reduction in CA-125, a blood indicator for ovarian and peritoneal cancers. The levels dropped quite dramatically from the 300s to the 30s, and are now in the normal range.
In fact, van der Heijden’s results were so encouraging, she has received special Food and Drug Administration approval for an additional three cycles of treatment.
“What’s just as impressive is that she's had very minimal side effects and has been able to maintain a good quality of life, which is not really the case with a lot of chemotherapy drugs that we give nowadays,” Dellinger said.
The main reason PIPAC has fewer debilitating side effects is that it uses only 10-20% of the typical chemotherapy dose.
Previously, van der Heijden’s quality of life had suffered greatly every time she underwent IV chemotherapy. She lost her hair, had such severe nausea she couldn’t eat, went through long periods of exhaustion and sometimes suffered from depression. None of that is happening with PIPAC.
“This is absolutely the cream of the crop where side effects are concerned,” said van der Heijden. “Now I still have my hair, I don’t have any loss of appetite, I don’t get blue, and I can get back to normal activity in a much shorter period of time.”

This is a Phase I trial for safety and efficacy, and it originally enrolled 16 patients. However, the results have been so promising, it will be expanding to 22. It is open to patients with peritoneal carcinomatosis who have failed at least one cycle of standard chemotherapy treatment.
Another arm of the trial, for colorectal cancer that has spread to the peritoneum, will be opening soon. The principal investigator is City of Hope surgical oncologist Mustafa Raoof, M.D., M.S.
“It’s been a very safe application, with minimal side effects, and we are seeing efficacy in select patients,” said Dellinger. “It’s very exciting. We’re really pushing the envelope.”
And van der Heijden couldn’t be more pleased with the trial. “For people with my kind of cancer, these trial results are a big win.”