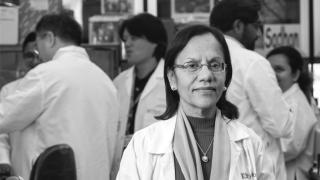 By
Katie Neith
Diabetes
Research
Rama Natarajan, Ph.D., the National Business Products Industry Professor in Diabetes Research, first joined City of Hope in 1990 as an assistant research scientist. Soon after, she identified the role of inflammation in diabetes complications, such as kidney and heart disease, by linking high glucose levels with increased blood vessel inflammation. Now, more than 30 years into her career at City of Hope, she continues to break new ground in the fight to understand and remediate the often debilitating and deadly side effects of diabetes.

A longtime focus for Natarajan, who is also professor and chair of the Department of Diabetes Complications & Metabolism, as well as deputy director of the Arthur Riggs Diabetes & Metabolism Research Institute, has been research on metabolic memory.
Rama Natarajan, Ph.D.
Metabolic memory refers to the persistent effects of poor blood sugar control on the later development of diabetic complications. On the flip side, it also points to the benefits of early glycemic — or blood sugar —control in preventing or delaying the development of such complications. A 2020 study by Natarajan and members of her lab published in Nature Metabolism reinforced their earlier work to demonstrate that the process underlying metabolic memory is epigenetic, meaning that it is caused by behaviors and the environment. Epigenetic changes affect the way that genes work in the body, but can be reversed.
This finding was the result of four years spent combing through data from the Diabetes Control and Complications Trial (DCCT), performed from 1983 to 1993, and the follow-up Epidemiology of Diabetes Interventions and Complications (EDIC) study that ran from 1994 to the present — two landmark studies designed to evaluate the effects of glycemic control on the development and progression of complications in type 1 diabetes patients.
By collaborating with investigators from the DCCT/EDIC study, Natarajan and members of her laboratory profiled epigenetic changes in blood samples collected at the end of the DCCT from 500 participants.
“Through extensive data analysis, data mining and functional exploration using genomic and epigenomic data obtained from these samples, data provide by the DCCT and EDIC studies, and multiple publicly available datasets, I am very glad that our studies not only confirmed our initial hypothesis that epigenetics is involved in type 1 diabetic complication development, but also revealed its role in metabolic memory,” said Zhuo (Nancy) Chen, M.D., M.S., a staff scientist in Natarajan’s lab. Chen has worked with Natarajan since 2008 and, with a combined background in computer sciences, bioinformatics, biology and medicine, she was drawn to the lab due to this type of work with big data.
Zhuo (Nancy) Chen, M.D., M.S.
With this knowledge, Natarajan and her team are investigating epigenetic marks as potential biomarkers for diabetic complication development and metabolic memory, collaborating with not only the DCCT/EDIC, but also with investigators leading other clinical trials of diabetic complications. Moreover, they are using integrated analytical and computational technologies to decipher epigenetic changes in diabetes, which could lead to novel approaches to developing drugs to target key drivers of metabolic memory.
“Our goal is to be able to facilitate early interventions that would prevent the progression to severe complications, and also to identify potential drug targets,” Natarajan said.

Natarajan has also shown that the development and progression of diabetic kidney disease (DKD) are influenced by epigenetic factors. DKD is both a highly prevalent and serious complication of diabetes that can lead to renal failure, with significant morbidity and mortality. There are few good treatment options for severe DKD, making it imperative to investigate novel mechanisms and drug targets.
A 2019 Nature Reviews Nephrology paper by Natarajan and Mitsuo Kato, Ph.D., associate research professor in the Department of Diabetes Complications & Metabolism, outlined ways in which genes involved with DKD are regulated by epigenetic mechanisms, such as noncoding RNAs (lncRNAs), that could be identified during the early stages of DKD, providing more timely diagnoses and prompt treatment to prevent progression to end-stage renal disease.
Mitsuo Kato, Ph.D.
More recent work by Natarajan, Kato, Chen and others, including a 2021 paper in Communications Biology, bolsters the idea that lncRNAs and microRNAs are involved on a molecular level in the progression of diabetic kidney disease.
“These types of RNA mediate signaling circuits that accelerate and maintain persistent expression of DKD-related genes, and could be involved with metabolic memory,” Kato said.
The good news is that a molecular technology developed by Kato and Natarajan (a type of anti-sense oligonucleotide inhibitor) has shown the ability to target those microRNAs and lncRNA in mouse models to prevent DKD, suggesting potential new therapeutics for DKD and for erasing metabolic memory. A patent was granted to the duo last year related to this antisense oligonucleotide inhibitor.
Inflammation is a major feature of most diabetic complications. The Natarajan lab was also the first to identify that abnormal expression and function of lncRNAs contribute to chronic inflammation in animal models with type 2 diabetes in 2014, which was reinforced by  subsequent reports.
In a study published in May 2021 in the Journal of Clinical Investigation Insight, Natarajan, Chen and Marpadga Reddy, Ph.D., assistant research professor in the Department of Diabetes Complications & Metabolism, further examined this connection and were able to identify a lncRNA that, when functioning properly, promoted an anti-inflammatory response via epigenetic mechanisms. But, when exposed to high levels of glucose and palmitic acid (found in saturated fats), as often seen in type 2 diabetes patients, levels of this lncRNA (called DRAIR) were reduced, thereby promoting chronic inflammation. This means, however, that supplementing lncRNAs like DRAIR could serve as novel anti-inflammatory therapies for diabetic complications.
Marpadga Reddy, Ph.D.
“Our studies demonstrate that targeting lncRNA-dependent epigenetic mechanisms could be beneficial in chronic inflammatory diseases and diabetes complications,” said Reddy, who first came to work in the Natarajan lab over 20 years ago when he was inspired by Natarajan’s innovative ideas and novel approaches to addressing molecular mechanisms involved in diabetes complications.
Reddy has also been working closely with Natarajan’s group on epigenetic and lncRNA-dependent mechanisms underlying the actions of angiotensin II, a major player in hypertension and diabetic complications.
“This is all very exciting, because recent developments in lipid nanoparticle-mediated delivery of mRNAs, such as those used in COVID-19 vaccines and in the delivery of antisense oligonucleotides, offer novel therapeutic opportunities via modulation of lncRNAs and their epigenetic targets,” Reddy said.

The Natarajan lab is also doing groundbreaking work around obesity. The type of systemic, low-grade inflammation that often occurs in the bodies of obese people is a strong risk factor for developing diabetes and related cardiovascular complications. Macrophages, which are specialized cells that seek out and destroy harmful organisms but can also dysfunction to release molecules that cause inflammation, are regulated by lncRNAs. But it wasn’t clear how lncRNAs influence macrophage dysfunction in relation to obesity.
In recent work, Natarajan, Reddy, Kenneth Stapleton, Ph.D., who was working on his doctoral thesis at the time, and others from their group identified a previously unknown protective lncRNA called macrophage inflammation-suppressing transcript (MIST). Their studies of MIST revealed that its loss during obesity in mice and humans contributes to metabolic dysfunction related to diabetes, and that it could be evaluated as a potential target for treating insulin resistance, inflammatory metabolic disorders and diabetes in general.
Furthermore, in ongoing studies, Kato, Natarajan and staff scientist Maryam Abdollahi have found that reducing key microRNAs and lncRNAs (via CRISPR-Cas9 gene editing) can protect mice from high fat diet-induced obesity.
These and other pioneering studies by Natarajan and her lab are contributing critical data for the development of new therapies, hopefully painting a brighter future those dealing with the side effects of diabetes.
“It’s not just about genetics now, but epigenetics as well,” said Natarajan, who has been funded by the National Institutes of Health for 30 years and who was elected as a fellow of the American Association for the Advancement of Science in 2020. In 2021, she received the American Heart Association ATVB Council Distinguished Achievement in Arteriosclerosis Award.