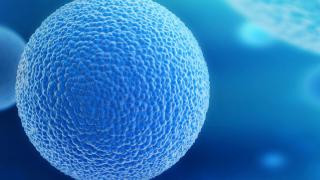 By
Malcolm Bedell
Diabetes
Joshua D. Tompkins, Ph.D.
Joshua D. Tompkins, Ph.D., assistant research professor in City of Hope’s Department of Diabetes Complications & Metabolism, is looking toward such cutting-edge fields as DNA repair, epigenetics and stem cell biology as potential cures for type 1 diabetes and its complications, especially cardiovascular disease.
Tompkins received a postdoctoral fellowship from the California Institute of Regenerative Medicine and was mentored in the laboratory of Arthur D. Riggs, Ph.D., the Samuel Rahbar Chair in Diabetes & Drug Discovery, where the pair's overlapping interest in epigenetics created both a personal and research bond. (Epigenetics involves the study of heritable factors, often influenced by environment, that control gene expression.)

On the forefront of the latest medical innovations, Tompkins and his team are researching ways to use stem cells to treat diabetes and associated health complications. Because stem cells can be given chemical signals to turn them into any other type of cell, and then grown in unlimited quantities, this research may lead to pancreatic beta cell regeneration in diabetic patients. In addition, the creation of laboratory-grown human heart cells may lead to new avenues for heart regeneration as a way to treat cardiac complications associated with diabetes.
City of Hope is already one of the largest islet transplantation centers in the country; in such transplants, beta cells are delivered into a diabetic patient using donor tissue, “where they will produce insulin and be responsive to glucose,” Tompkins said. “The problem is that because it’s a transplant, patients typically need to be on immunosuppressants for the rest of their lives.”
Taking cues from stem cells, Tompkins is researching ways in which beta cells could not just be transplanted, but eventually regrown in the patient’s own pancreas, circumventing transplant immune rejection. Working with Defu Zeng, Ph.D., professor in the Department of Diabetes Immunology, “We have developed viruses that carry genetic information to reprogram a cell related to the beta cell, called the alpha cell, and cause those alpha cells to convert themselves into beta cells and become functional. So far, it’s cured diabetes in several mice, so the next step is to see if it works as well in humans,” Tompkins said.

Tompkins and his team are also unlocking the secrets of how epigenetic changes occur across patients with type 1 diabetes. “We know that if you have diabetes, you’re at a much higher risk of having heart disease or a heart attack, because of the way diabetes wreaks havoc on the cardiovascular system,” Tompkins explained. “This can be even worse in cancer patients, whose bodies are already under a lot of stress; when a patient undergoes chemotherapy, it can cause further damage to the heart and pancreas. Heart disease, cancer and diabetes are linked; we’ve noted similar epigenetic changes across each of these diseases.”
Recently, a landmark 20-year study of complications in patients with type 1 diabetes has led to some surprising breakthroughs. In this study, pioneered by City of Hope’s Rama Natarajan, Ph.D., the National Business Products Industry Professor in Diabetes Research, the potential for long-term complications in patients who controlled their glucose levels through strict monitoring and injections was investigated. Compared with a second group who were less rigid in their management of the disease, the study found that patients who managed their diabetes well were less prone to complications in the future. But critically, the study also found that patients who started out managing their diabetes poorly, even if later they became more rigid in their monitoring, still had a high rate of complications later in life.
By studying epigenetic patterns in blood samples from these complications patients, this study demonstrated that these patients’ bodies had an epigenetic “memory” of the patient’s prior poor glucose management. This helps to explain why the phenomenon of “metabolic memory” has long been a challenge in the successful treatment of diabetes, and offers new biomarkers to predict which patients may have higher risks of diabetes-associated health complications.
Building on this study, Tompkins and his team are now asking if the epigenetic DNA changes associated with metabolic memory are reversible. “There are about 55 million DNA sites, or marks, where we would expect to see such changes,” Tompkins explained. “What’s remarkable is that for patients who have a higher rate of complications, all have only a few of these marks that are specifically changed. In particular, there’s a gene that’s incredibly responsive to glucose, and it’s this gene that’s lost its normal epigenetic pattern. That finding alone is remarkable, because it means that there’s a long-term high glucose-induced change happening on top of your DNA that’s causing this gene to become defective. It causes cells to die at a higher rate when they’re exposed to sugar, even much later in life.” That gene is the target of Tompkins' current research.
Tompkins likens this epigenetic change to a “broken switch,” and in the next phase of his research, he is exploring whether this switch can be “changed back” through an epigenetic DNA repair process. In this approach, DNA strands are “scanned” by a specialized protein that targets a specific location. Next, this protein recruits an enzyme capable of changing DNA epigenetic marks in the region.
“We find a target cell, we deliver the instructions for this specialized protein to scan the genome, bind to that target location and flip the chemical pattern back. Then the question becomes: Does doing this fix the problem? Does fixing the epigenetic chemical pattern restore function? We think that it does, and signs are pointing in that direction,” Tompkins said.