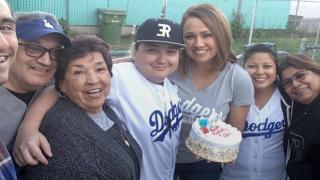 By
Abe Rosenberg
Patient Care
Rose Parade
Most of us don’t break into tears when we buy shoes. It’s hardly an emotional experience.
Unless you’re Eddie Ramirez.
A few months ago, the 22-year-old from West Covina, California, ordered his very first pair of Converse high tops.
He’s still crying.
“I can’t tell you how many times the tears came out, just thinking about it,” he explained. “I’ve been dreaming of these shoes ever since I was 9 years old.”
At age 9, while playing baseball, a fly ball Ramirez tried to catch hit him instead. “It activated all the pain,” he remembered.
Many tests and doctors later, his family got the bad news. Ramirez had Ewing’s sarcoma, the second most common childhood bone cancer, with a tumor buried in his pelvic bone.
Surgery to remove the tumor left Ramirez with his right leg several inches shorter than his left. The only way he could stand or walk was to wear a large, unsightly prosthetic boot. He wore it for 13 years. At times he thought he’d have to wear it forever.
Surgeons didn’t want to try to correct the imbalance until Ramirez turned 21 and stopped growing. But even then he was told the best available “fix” would involve a “massive harness,” a very long recovery and, at best, dramatically diminished mobility and range of motion.
He felt frustrated. Then he met Lee M. Zuckerman, M.D., one of City of Hope’s newest orthopedic oncologists.
Arriving in 2019, Zuckerman had brought with him techniques originally used on children with birth defects or who’d suffered major injury and were left with one leg shorter than the other.
Lee M. Zuckerman, M.D.
The basic process lengthens short limbs by implanting a telescoping rod inside the bone. During the procedure, small incisions are typically used to cut the bone and place the rod inside one end of the cut bone. The rod contains an internal motor that is driven by a magnet that allows the rod to telescope.
After surgery, the patient uses an external magnet to activate the motor, which gently moves the bone where it was cut by about a millimeter a day. The body is able to form new bone around the rod where it was cut, similar to how the body would heal a broken bone.
As the bone is lengthened, the body continues to form new bone to fill in the gap. Moving the bone slowly allows the body to form new bone, but it remains soft and flexible. Once the lengthening process is complete, the bone is allowed to fully heal and becomes solid like a regular bone.
Zuckerman felt certain this technology would work equally well in cancer patients, and his record bears that out. He pioneered the use of these rods in patients who had large segments of their bone removed due to cancer and were reconstructed with donated bone, or “allograft.”
“Typically, we would use plates with screws to compress the patient’s own bone to the allograft, as compressing the bones together is vital to the allograft healing. The biggest problem we have with this procedure is getting the allograft to heal to the patient’s own bone. These rods are able to both expand and compress, so they provide another method of getting the allograft to heal when we use them in compression.”
Zuckerman says limbs repaired with a rod do a better job bearing and sharing loads, compared to using plates, and very large gaps can be filled. There are also certain cases where children with cancer have to have the portion where their bone is growing removed in order to remove the cancer. This stops that portion of the bone from growing and causes one limb to be shorter than the other. After the allograft has healed, Zuckerman has been able to lengthen the same limb with a small procedure where the bone is cut around the rod that was used to heal to allograft. The motor is then used to expand the rod and grow new bone.
When looking at his results, the magnetic rod system achieved healing rates of up to 87% with allografts, compared to 45 to 85% seen with other techniques. Patients were ultimately able to walk “without a shoe lift or assistive device.”

Bringing this expertise to City of Hope made perfect sense to Zuckerman, who pointed out that few cancer surgeons elsewhere are performing these procedures. Like many new innovations, institutions may be reluctant to adopt a new technology for multiple reasons.
City of Hope is different, with its multidisciplinary approach built into the institution’s DNA. Everyone is encouraged to collaborate, to break down walls, reach across invisible borders and dismantle old “silos.”
“City of Hope has been very receptive; they want to promote this,” said Zuckerman. “You get so much support here from other divisions and departments, and they see how these techniques can have a significant impact on patient’s lives.”
But cancer patients are different, too. Radiation and chemotherapy can slow or reduce a bone’s ability to grow, heal or bind with a graft. Ramirez had gone through long courses of chemo before his tumor was removed.
Nevertheless, Zuckerman felt confident, as he had seen situations exactly like what Ramirez was facing and had successfully treated these problems. The son of a neurosurgeon and a nurse, he has more than 15 years of surgical experience, and he knew he could help. Plus, as a runner who has completed multiple marathons and Ironman triathlons, he understood how important it was for Ramirez to “get back in the game.”
“He [Zuckerman] laid it all out for me,” recalled Ramirez. “He also explained how relatively simple it was, and how, at the end, there would be no limits on what I could do.”
Over the next four months, Zuckerman’s implanted rod did its job. Periodically, Ramirez would turn on his external device, which would ever-so-gently pull the short femur forward.
“I didn’t see much of a difference at first,” Ramirez recalled. “Then one day I looked at both legs, and my toes could touch each other!
“What a great feeling in my heart!”
That’s when he bought the high tops. When he put them on, both feet touched the floor. Together. “Amazing,” he thought. “I never believed it could happen.”
He showed his family.
“Oh my God,” he exclaimed. “They just stared at it!”
As with any procedure, there’s always room for improvement, and Zuckerman is working on it. He is using the technology to use the patient’s own bone to reconstruct defects that result from removing cancer.
“Instead of using the allograft to replace the bone that was removed, we’re transporting the patient’s remaining bone to fill the defect. It uses the same principle used to lengthen a limb and allows us to basically recreate the patient’s bone.”
His bottom line dovetails with City of Hope’s mission to restore patients, whenever possible, to their best selves.
“What this does,” he explained, “is it gives us another method to save a limb, and to preserve and recreate a patient’s anatomy as normally as possible.”
For Ramirez, “normal” is a beautiful feeling he waited a long time to experience. He’s grateful to City of Hope for helping him get there.
“It’s a place,” he said, “where everyone feels like family.
“And you’re never alone.”