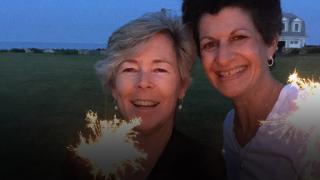 By
Michael Easterling
Patient Care
It was in 2011, not long after Gayle Whittemore married the love of her life, Alexandra Glickman, that she would be forced to embark on another, less romantic journey: breast cancer.
It began, she said, with a “gnawing feeling”— a pain in one of her nipples that wouldn’t go away.
“It was itchy, scratchy, that kind of sensation,” said Whittemore, the owner of a nonprofit financial consultancy, Whittemore & Associates. “It was an uncomfortable sensation that I admittedly ignored. I thought ‘I’m invincible, nothing’s really wrong with me.’”
Whittemore said she was diligent in getting her annual checkups and mammograms, and everything always came back fine. When the pain didn’t go away, her internist recommended a biopsy.
She resisted.

“I said, ‘No, thank you very much,’ and walked out the door and didn’t do anything about it,” she said. “I know at that time I was in denial.”
Whittemore’s wife disagreed with her. She went to Whittemore’s mother, a renowned epidemiologist and biostatistician at Stanford University (now retired), and the two of them urged her to reconsider a biopsy.
“I was a little more forceful,” said Glickman, who is senior managing director and global practice leader for Arthur J. Gallagher & Co. “I said, ‘You are going to get that biopsy, and you’re going to get it at a National Cancer Institute-accredited hospital.” Glickman had a familial history with City of Hope and has been an active supporter of its philanthropic efforts for many years.

“Because of Alex’s existing relationship with City of Hope, I knew if I was going to do this, City of Hope was where it was going to be,” Whittemore said. In January 2012, she became a patient of Laura Kruper, M.D., M.S., and the biopsy was performed.

After the biopsy, Whittemore and Glickman left the Women’s Health Center and sat down on a nearby park bench to take in what they were facing. Because of Glickman’s generous support over the years, City of Hope’s Office of Philanthropy had recognized her contributions with an honorary plaque. Quite serendipitously, the couple was sitting on the “Alexandra Glickman” bench.
Laura Kruper, M.D., M.S.
“I knew that there was a bench on the campus somewhere that had my name on it,” Glickman said. “But when we sat down and saw that it was that very bench, unbeknownst to us, it was so special. We knew City of Hope was where Gayle was meant to be.”
When the biopsy results came back, Kruper reached Whittemore at home with the news that she did, in fact, have cancer and said a lumpectomy should be scheduled as soon as possible. Her diagnosis was Stage 2 HER2-positive breast cancer; more specifically, a rare form called Paget disease of the breast, which involves the skin of the nipple and the areola, the darker circle of skin around it.
“I was stunned,” Whittemore said. “We caught my disease because of my wife and my mother’s insistence that I see a doctor.”

After that initial surgery, Kruper had to share the disappointing news that the cancer has spread to Whittemore’s lymph nodes. A second surgery was needed. Whittemore was also outfitted with a port for her chemotherapy, and a course of radiation was ordered. The lymph node metastasis also caused complications and dangerous fluid buildup.
“During that very difficult time, Dr. Kruper and Dr. Joanne Mortimer were so compassionate and so precise in how they took care of me,” Whittemore said. “They became like family to me. And I’ve come to see that’s who everyone at City of Hope is. Once you’re a patient, City of Hope becomes a second family to you.”
After a chemotherapy appointment one day, Glickman picked up her wife and the couple went to lunch nearby. By the end of that lunch, Whittemore said she couldn’t move her arm. She ended up back on the City of Hope Duarte campus — this time in urgent care. She had developed a MRSA (methicillin-resistant Staphylococcus aureus) infection that made her very ill.
“I was unbelievably sick,” she said. She underwent a third surgery and was an inpatient at City of Hope Helford Clinical Research Hospital for five days. Glickman said she was angry and frustrated that she couldn’t do more for her wife and felt helpless.

An Idea for Coping With Cancer

“I would go for walks on the campus, especially in the Rose Garden, wondering what I could do as a caregiver,” said Glickman, who has four adopted children and a grandson with Whittemore. “As hard as this was on Gayle, it’s also hard and scary when you see the person you love going through such agony.”
Glickman had an idea. She was already well acquainted with City of Hope’s commitment to compassionate care and treatment, and knew that humanity and kindness extended to the family of the patients as well. She decided to see what she could do to help start a supportive care program where patients and their loved ones could learn how to go through a cancer diagnosis together, and how the caregivers could give the most support, as well as receive the support they need to remain strong for their partner.
“I told Joanne [Mortimer] that Alex and I wanted to do something,” Whittemore said. “We shared our idea, and then we brainstormed with Matt [Loscalzo] and Courtney [Bitz] to see how this could fit into their supportive care model.” Whittemore and Glickman reached out to some of their friends who had supported important causes before and told them what they had in mind.
“They were incredibly generous, and we managed to raise $200,000 to help get the program started and hire a dedicated social worker to manage what would become Couples Coping With Cancer,” Whittemore said.
Couples Coping With Cancer is a thriving program at City of Hope and one of the only programs of its kind. It is offered as part of the normal continuum of care City of Hope provides to all patients and their families.
“We all know that mental and emotional health are just as important as physical health,” Glickman said of Couples Coping With Cancer. “A diagnosis doesn’t just impact the patient; it impacts the patient’s partner and family as well. Even the most loving and secure relationships can struggle with emotional support, communication and problem-solving, and that’s what our vision for this program was.”
Couples Coping With Cancer has been a success since the very beginning. To date, 2,297 couples have benefited from the program, which has received $765,553 in philanthropy and grant support since its inception.

“We are so gratified that it has been embraced by the patients and their loved ones at City of Hope,” Whittemore said of the program. “I know that I could not have gone through my own cancer diagnosis without Alex, my mother, and friends and family around me.”
In that spirit of giving back, Whittemore has graciously agreed to be the patient ambassador for this year’s virtual Walk for Hope, City of Hope’s annual campaign to raise funds for treatment, research and support programs for breast and gynecological cancers.
“At first, I thought, ‘Well, I’m not an on-camera kind of person,’ but I also knew that this isn’t about me,” Whittemore said. “City of Hope saved my life, and I wanted to step up and get the job done. It takes a village coming together for a cause to make a difference. And it’s not just about money. Funding is essential, of course, but it’s also about raising awareness, and that’s why I Walk for Hope. You never want to become a cancer patient, but if you do have cancer, there is no better place than City of Hope.”
Join us for the virtual 25th annual Walk for Hope on Sunday, Nov. 7. You can find more information, register and donate here.