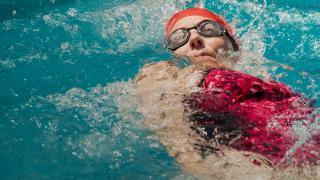 At her next well woman exam, over a year later, Clifton-Hawkins expressed her concerns again. Over the previous year, the lump had grown. Additionally, she felt that the composition of her breast tissue had changed, becoming thicker.
Once again, she underwent an ultrasound and mammogram — this time with much different results. She learned that she needed a biopsy, which revealed that her original suspicions were correct, and something was very wrong.
Clifton-Hawkins was diagnosed with Stage 2 breast cancer that was also triple-positive (HER2-positive, estrogen-receptor positive and progesterone-receptor positive).
As City of Hope’s community benefit senior manager, Clifton-Hawkins spent years working closely with physicians and researchers across the organization. She knew she would be in good hands at City of Hope, surrounded by people she trusted, so she contacted two doctors she had come to know during her time at City of Hope, and asked them to take her case.
Clifton-Hawkins asked Arti Hurria, M.D., to be her oncologist and Laura Kruper, M.D., to be her breast cancer surgeon. They both agreed, quickly devising a treatment plan. The first order of business was removing her tumor.
Kruper began by performing a bilateral mastectomy. Eight weeks later, Hurria took over and started Clifton-Hawkins on an aggressive chemotherapy protocol.

Blessed with a strong network of supportive friends, family, colleagues and neighbors, Clifton-Hawkins leaned on the people in her life to help carry her through this difficult time.
“I had chemo every two weeks, and the side effects were rough, so I tried to make those appointments as fun as possible. I brought my friends in, we had tea, we did crafts and aromatherapy, we played games. I was just trying to make it a good experience because I knew that in two days, I was going to have a bunch of canker sores in my mouth, I wouldn’t be able to eat anything, and I’d be nauseous and exhausted” she explained.
Clifton-Hawkins also relied on her 30-year Buddhist practice, the foundation of which is based in mindfulness and gratitude, to help her as she navigated her cancer journey.
“Even during such a frustrating time, there’s always something to be grateful for. For me, I was grateful for the time I got to spend with my family and friends who came to visit me during chemo. I also got spend time with other patients there with me in the infusion room,” she said.
“Getting to know the nurses and seeing their capacity for compassion and their level of dedication was amazing, and spending time with the volunteers who would come in — I was grateful for it all. Even though I was in a hard situation, I found so many things to be grateful for.”
After completing a first cycle of chemotherapy, Clifton-Hawkins began a new phase which required her to go in for infusions once a week.
“Because the first phase of the chemotherapy was so traumatic, I wasn’t sure if I could make it through weekly appointments. I didn’t know if I had it in me. There were times that the chemotherapy was so grueling I just wanted to quit,” she said.
Clifton-Hawkins knew that in order to begin her next round of chemotherapy in a good headspace, she needed to begin healing some of the treatment-related trauma she had gone through. So, in the midst of her cancer treatment, she sought out mental health treatment as well, seeing a therapist who specializes is trauma.
“I did EMDR therapy, and by the end of the first hour, I was no longer worried that I wasn’t going to make it through the chemotherapy. I was actually hopeful, and I actually believed that I would be successful,” she said.
And Clifton-Hawkins was successful. Her weekly chemotherapy treatments were much less taxing, and she began to feel stronger and more optimistic.

Complications of the Heart

The next step on Clifton-Hawkins’ cancer journey was Herceptin treatments (a drug used to help prevent recurrence of breast cancer) administered via infusion every three weeks. But the Herceptin led to another rare side effect — heart failure.
“I experienced cardiomyopathy, so I had to be taken off the Herceptin to allow my heart to heal. I had to go on a couple of heart meds,” she recalled.
“It kind of [ticked] me off, to be honest, because I had started swimming again and I was feeling good and having a good time.”
When Clifton-Hawkins attempted to go back on Herceptin, her heart issues continued, so her care team decided to stop those treatments altogether. But she still wasn’t quite done with her long and arduous cancer journey.
She was put on Neratinib, a targeted cancer drug that is taken orally. She spent an entire year Neratinib, and then finally, mercifully, her cancer journey came to an end.
Clifton-Hawkins had finished the race of her life and emerged victorious.

Back in the Water

“As a long-distance swimmer, you don’t go out in a sprint in the very beginning. You pace yourself. And that’s what I had to do. So, I went into this experience with the mindset of an endurance athlete and I think that helped,” Clifton-Hawkins said.
Her game plan worked, and now, two years later, Clifton-Hawkins remains cancer free.
And, of course, she’s still racing through the waters of the Pacific Ocean — the waters that taught her how to beat cancer.
Required*