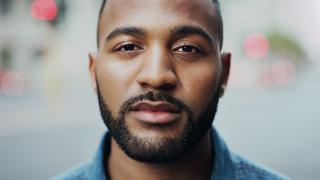 By
Abe Rosenberg
Research
“We’re expanding the paradigm of how to do clinical studies.”
Kimlin Tam Ashing, Ph.D., is speaking excitedly about a new clinical trial that’s breaking some old norms in order to better serve patients who need help the most.
Kimlin Tam Ashing, Ph.D.
Ashing, City of Hope’s director of the Center of Community Alliance for Research and Education, is casting a wide net to reach patients with a condition known as smoldering multiple myeloma. SMM patients display no symptoms, but are at much higher risk of developing full-blown multiple myeloma, a rare blood cancer affecting 35,000 Americans each year.
The trial takes a new look at a 23-year-old rheumatoid arthritis drug, leflunomide. Research has already shown that leflunomide may help multiple myeloma patients by blocking enzymes needed for cell growth. Now investigators want to see if leflunomide can also slow the precursor — delaying the progression of SMM into active myeloma, or even stopping it entirely. The drug carries several advantages.
“Leflunomide has a long safety record,” said multiple myeloma expert Michael Rosenzweig, M.D., M.S., a co-principal investigator. “It’s been well-tested, it’s essentially nontoxic and well tolerated. Plus it’s much more affordable than any other multiple myeloma treatment.”
Michael Rosenzweig, M.D.
A longstanding criticism of clinical trials has been that participants don’t always reflect the patient population who will end up using the drug. Investigators like to test their experimental treatments on younger, healthy people for safety’s sake, so they set up exclusion parameters that in effect keep the drug out of reach of many people who need it.
Lack of diversity is another issue. African Americans and other people of color have long been underrepresented in clinical studies, in part because of systemic factors — they don’t always hear about them, their communities don’t have high-level medical and research facilities that offer them, and there is a low rate of clinician referral. In addition, historical factors make it necessary for the medical system to undertake community-engaged and culturally responsive efforts to gain the trust and confidence of the African American community, Ashling says.
The leflunomide trial afforded an opportunity to address those issues. And to change the paradigm.

A New Way of Doing Things

“We hope this is the new way,” said Steven T. Rosen, M.D., City of Hope’s provost, chief scientific officer and the Irell & Manella Cancer Center Director's Distinguished Chair. His interest in leflunomide goes back more than a decade, when an elderly patient at Northwestern University responded to the drug after other treatments had failed. Rosen kept that experience in mind after joining City of Hope, where he discovered “the most dramatic responses [to leflunomide] occurred in two Black patients.”
Then the National Cancer Institute expressed a strong interest — backed by substantial grant money — in studying treatments that provide specific benefits to Blacks. This push for greater diversity dovetailed perfectly with everything Rosen and City of Hope had learned thus far about leflunomide.
“This was a natural,” said Rosen.
Steven T. Rosen, M.D.
According to the Multiple Myeloma Research Foundation, multiple myeloma is twice as common — and twice as deadly — in Black Americans than in white Americans. So Ashing and the investigators are prioritizing efforts to engage community advocates and health leaders in order to reach and recruit people of color. The researchers will then compare the treatment response of Black patients to the white European American patients.
The real paradigm change, however, is in how the data will be evaluated. Researchers plan to probe much deeper than simply noting differences in skin color.
“We’re going beyond statistical comparisons,” explained Ashing. “We’ll look at participants’ neighborhoods, their social structure, their experiences of discrimination, their ancestry” (a component to be handled by City of Hope’s ancestry expert, Rick Kittles, Ph.D.). “We’re going to examine the whole person. We want to understand people, including their response to treatment, beyond their diagnosis.”
Broadening clinical study parameters in this way is a first for City of Hope. “The ancestry analysis is brand new,” said Rosen. “The unique recruitment effort is brand new as well.” Going forward, Rosen plans to set these guidelines in stone, with a new director of clinical trial diversity and inclusion, “to get more underrepresented people into our clinical trials.”
Recruiting has already begun, and patient screening is underway. It is hoped that about 150 people will sign up at locations currently being set up across the country, many of them (like Detroit, Michigan and Charlotte, North Carolina) selected for their large Black populations. A multi-ethnic advisory council is spearheading outreach efforts to bring word of the leflunomide/SMM trial into those communities, with educational materials — like culturally responsive flyers — tailored to that audience.
Contrary to conventional thinking, so far recruiters have experienced community openness and acceptance of the importance of the study in the Black community, and Ashing is not surprised.
“I think that old narrative is overblown, and I believe the community has wised up,” she said. “They understand the need for more dedicated clinical and treatment studies — like this one — in order to reduce Black health disparities. People want to be healthy. They want the best of care.”
Importantly, she added, “In our community research navigator program, we are training community members to educate their communities that clinical studies are a critical component of the best medical care.”
Typically, it can take two years for SMM to advance into full multiple myeloma, so the trial will run to the end of 2023 to determine what, if any, difference leflunomide makes over the long term. “Ideally,” said Rosenzweig, “we hope to find that patients treated with leflunomide extend [their nonsymptomatic status] beyond two years, or even indefinitely.”
Success in this effort will delight Rosenzweig, who was drawn to the treatment of such rare diseases a long time ago.
“These patients are vulnerable because of little-understood illnesses. Being able to help them is especially gratifying.” Being at City of Hope puts him in the right place at the right time.
“The world of cancer and hematology has become incredibly complex. But the advances we’re seeing are very exciting. They’re changing outcomes for our patients in dramatic ways!”
Required*