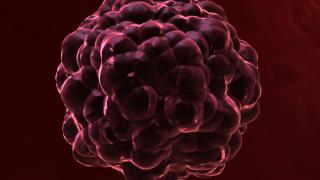 By
Maxine Nunes
Research
Imagine there’s a “boiling point” for cancer — an exact point at which a normal cell becomes malignant, just as water becomes vapor at 212 degrees Fahrenheit. Once we discovered that point, we could turn down the “heat” before cancer ever occurs.
A new study  — one of four recently funded by the National Institutes of Health (NIH) and led by Russell Rockne, Ph. D., director of the Division of Mathematical Oncology at City of Hope — is attempting to unlock that knowledge.

Long before cancer develops from a DNA mutation, the cells of the body send out messages that create a cascade of events that can lead to malignancy — and this is where the boiling point analogy comes in.
Russell Rockne, Ph.D.
“In a normal state our cells move freely and easily,” Rockne said, “but cancer has a higher energetic state, a more excited state, and it’s more erratic and disorganized.”
Tracking the course of this transition from normal to malignant requires a nontraditional approach to studying cancer, one that does not focus on DNA mutations but rather on temperature and epigenomic phenomena. He explained it this way:
“DNA is like a collection of books with a lot of words, and the classical genomic view focuses on the words themselves and the changes that result from them. We’re taking the epigenomic view, which is about the steps that take place after those words are read and then acted on.”
To understand what happens as cells transition from their normal state to cancer, Rockne has been charting the messenger RNAs, which translate the words written in the DNA, as well as the noncoding microRNAs and DNA methylation that regulate changes based on those messages.
Once we identify the point where cells shift from normal to malignant, we can potentially stop the process before a malignant cell ever appears.

The five-year study will focus on acute myeloid leukemia. This rapidly progressing cancer can quickly turn fatal, and with an overall survival rate of about 28%, there’s a critical need for new methods of diagnosis and therapy.
“In AML, after an initial DNA mutating event, your entire bone marrow system undergoes a global change and becomes disregulated,” said Rockne. “We’re looking at how the information within all the different cells in your peripheral blood changes in the process of cancer initiation and progress.”
Rockne calls his City of Hope team for this study a trifecta of expertise. In addition to his field of mathematics, he is working with hematologist-oncologist Guido Marcucci, M.D., and Ya-Huei Kuo, Ph.D., associate professor in the Department of Hematologic Malignancies Translational Science.
With their combination of expertise, the study will use mathematical modeling to make sense of billions of pieces of epigenomic data, as well as laboratory experimentation and eventually clinical trials.
Rockne and his team laid the groundwork for this grant in a recently completed study of AML in mice. Their finding — the first of its kind — bears out his initial concept.
“We were able to show that not only does the blood carry messages showing that something’s wrong in your body — but that these changes can be seen very early on, before any cancer cells are detectable,” he said.
Rockne’s team is also doing a similar study of the peripheral blood in AML patients at City of Hope who have undergone a bone marrow transplant.
“We are looking to see if we can predict whether they will relapse or not, based on their epigenetic state,” he said. “For example, is it ‘cooling’ back down and reverting to its normal, healthy state or is it going back to its cancer state?”
These are purely observational studies, so nothing will change in the patients’ treatment. Researchers will simply collect and analyze their blood to make sure the mouse study findings prove true for humans. If they do, then clinical trials will follow and hopefully lead to arresting AML before it starts and new approaches to highly personalized treatments.

Rockne has also received three other grants from the NIH that also hold great promise.
One grant for study of women with estrogen receptor-positive breast cancer will explore whether the disease occurs because of faulty immune system signaling. If we can understand how this signaling interferes with the immune response, the information may also be applicable to other cancers and diseases.
Another study will focus on multiple myeloma, a common and often-incurable form of blood cancer that frequently becomes resistant to treatment. He will test a novel combination of therapeutic radio-labeled daratumumab and CAR T cell therapy, which he believes will eradicate multiple myeloma cells with minimal toxicity to the patient.
The last of the four studies will tackle one of the main obstacles in treating brain cancers — the blood-brain barrier, which prevents a brain cancer treatment from reaching its target. The hope is that neural stem cells will be able to carry drugs past that barrier, allowing us to develop therapies based on an individual’s tumor and the pathways in their brain that will deliver treatment most effectively.
Each of these studies may lead to important new discoveries — and Rockne is particularly excited about the “boiling point” theory. If it proves true, there may someday a blood test that can tell you if you’re transitioning to cancer, and new treatments that would nip that process in the bud.