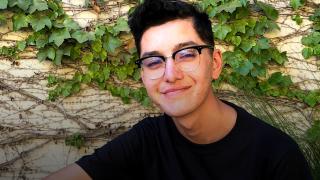 By
Letisia Marquez
Patient Care
As a 16-year-old high school sophomore, Julian Castañeda was focused on running track — specifically, trying to run a mile in under five minutes. He was also planning to attend two camps that summer that would help him prepare for the rigors of college.
Despite being diagnosed with precursor B cell acute lymphoblastic leukemia at age 10 and receiving chemotherapy on and off for three and a half years, Castañeda had been in remission for two years. He had moved on from that difficult experience.
But in March 2017, Castañeda and his mother, Erica Palacios, again received devastating news — the leukemia had returned. Castañeda received chemotherapy for a few months, but the cancer kept proliferating. Castañeda would need a hematopoietic stem cell transplant (more commonly referred to as a bone marrow transplant, or BMT) this time to put his cancer back into remission.
“It was heartbreaking. I knew at that point that all my plans for sophomore year would be gone,” Castañeda recalled.
But Castañeda was determined to get his life back. This was possible thanks to Johannes Eppler, 27, of Breisach, Germany, who joined the bone marrow registry via DKMS, an international nonprofit that is dedicated to the fight against blood cancers and blood disorders, including the recruitment of bone marrow donors. Castañeda received a bone marrow transplant on Aug. 2, 2017, putting the cancer into remission.
“He has a big heart,” Palacios said about Eppler. “He’s an angel. He saved my son. I am thankful that people are willing to [donate].”

Castañeda, who grew up in Bakersfield, California, and was treated by City of Hope’s Joseph Rosenthal, M.D., M.H.C.M., the Barron Hilton Chair in Pediatrics, is now 20 years old and a junior at California State University Northridge. He also founded Bags of Love Foundation, a nonprofit that has delivered more than 200 care packages to young cancer patients in treatment and has provided $11,000 in scholarships to survivors.
On Friday, Oct. 15, Castañeda will meet his donor for the first time virtually during City of Hope’s BMT Reunion. City of Hope, a pioneer and leader in BMT, has hosted a Celebration of Life for bone marrow, stem cell and cord blood transplant recipients, their families and donors for more than 40 years. The celebration honors children and adult cancer survivors, including those who have received autologous transplants, which use a patient’s own stem cells, and those who received an allogeneic procedure, which require a bone marrow or stem cell donation from a related or unrelated donor.
What began with a birthday cake and a single candle representing a patient’s first year free from cancer has grown into an annual extravaganza that draws thousands of cancer survivors, donors and families from around the world, as well as the doctors, nurses and staff who help them through the lifesaving therapy.
Each year, patient-donor meetings are the event’s emotional highlight. Many recipients, though overwhelmed with curiosity and the need to express their gratitude, can only dream of meeting the stranger who saved their lives. City of Hope is making that dream come true for Castañeda, as well as Dona Garrish, a Fullerton, California, resident and retired school teacher. Her donor was Michael Fischer, 35, of Wölkau, Germany.

Her 'Gift From God'

Patient Dona Garrish
Garrish, 75, received her transplant on March 22, 2017, after it was delayed several times due to infections and other complications that prevented her from going through with the treatment. Garrish, who was diagnosed with acute myeloid leukemia, felt a strong connection to Fischer from the first time a City of Hope employee told her a German male, whom she had never met, was a perfect match for her. She refers to him as her “gift from God” and her “angel on Earth.”
“He unknowingly encouraged me to fight harder and not to become discouraged, as someday I wanted to meet him and thank him,” she added. Garrish recalled watching two patients meeting their donors at the 2017 BMT Reunion. The reunions were held in front of City of Hope Helford Clinical Research Hospital, where Garrish was recovering from her transplant.
While tethered to her IV pole, Garrish looked down from the hospital’s sixth floor and said, “That’s what I want to do.”
“City of Hope nurses, doctors and staff were constantly there supporting me every step of the way, even when I couldn’t take a single step,” said Garrish, who was treated by City of Hope’s Liana Nikolaenko, M.D. “The timing was urgent, my battle was rough and long, but I live, breathe and enjoy life today because of City of Hope.”

Other event highlights include videos of grateful patients wearing the signature BMT buttons that display the number of years since their transplants, comedy by City of Hope BMT patient Sean Kent and a dance/song performed by BMT nurses, known as the Marrowettes. There will be special guest appearances by a Los Angeles Dodger and Katharina Harf, executive chairwoman of DKMS U.S., to congratulate patients, their donors and the BMT program.
“During our annual BMT reunion, we express our most heartfelt thanks to the many selfless individuals who each year donate their bone marrow or stem cells to save a person’s life,” said Stephen J. Forman, M.D., director of City of Hope’s Hematologic Malignancies Research Institute and former chair of its Department of Hematology & Hematopoietic Cell Transplantation. “Whether the donor is a patient’s family member or a person she or he has never met, we are all extremely grateful that these donors took the time to donate and gave someone a second chance at life.”
The public can register to view the event here.
To learn more about the donation process, visit Be The Match at City of Hope’s website.