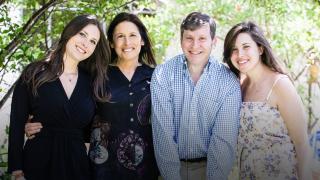 By
Abe Rosenberg
Patient Care
Success Stories
Success Stories
“She’s a force of nature. I’m a big fan!”
That’s how longtime City of Hope hematologist and oncologist Stephen J. Forman, M.D., describes his patient and friend, Sue Himmelrich, the outspoken lawyer-activist who became mayor of Santa Monica, California, in late 2020 following six years on the city council.
Politically active since her teen years in Baltimore, Himmelrich (pictured above with her family) has spent over four decades fighting for causes and giving voice to the voiceless, especially the poor, the homeless and the dispossessed. Her battle on behalf of trailer park residents threatened with eviction helped kickstart her Santa Monica political career back in 2012.
Eight years earlier, however, she fought a deeply personal battle that ultimately brought her to City of Hope and into Forman’s care. She’d begun feeling ill.
“I went undiagnosed for six months,” recalled Himmelrich, somewhat ruefully. Her doctors had dismissed her early symptoms as “stress.” She knew better. Eventually a computed tomography scan and biopsy revealed the actual cause: non-Hodgkin’s lymphoma.
She thought immediately about her family. Himmelrich and her attorney husband Michael Soloff have two daughters, who were 11 and 14 at the time. “My goal was to stay alive until they graduated,” she said.
She underwent chemotherapy close to home, “kept living my life” and believed she’d beaten the disease. Until she relapsed in 2006. It was time to pivot.
Himmelrich sought out Forman, whom she already knew through social and professional connections. In short order she was at City of Hope, having her stem cells harvested for an autologous transplant, which went remarkably well. Fifteen years later, she remains cancer free.
Did the experience change her? Does it impact her political work?
“I try really hard not to dwell on it,” she said. Yet her public words suggest there is something going on. Her recent State of the City address included these words of encouragement to her pandemic-stricken constituents:
“Having struggled with my own mortality in 2004, when I was diagnosed with non-Hodgkin’s lymphoma, and then relapsed in 2006, I knew my approach was simple. Put one foot in front of the other, keep my eyes firmly trained on the path to recovery and pay it forward.”
Nearly a year earlier, at the start of the pandemic, Himmelrich wrote extensively about how her cancer experience prepared her for COVID-19-style precautions — masks, hand-washing, etc — and she offered her personal playbook for getting through the tough times.
“When the coronavirus changed all of our lives, I already had a road map for survival. Mostly because I have been in isolation before ... So I am following the same routine I developed at City of Hope. Get up. Shower. Get dressed. Move around every day, sometimes walking, sometimes gardening, sometimes cleaning. Stay in touch with my family.”

Another Mayor, Another Diagnosis

As reluctant as Himmelrich is to dwell on her cancer experiences, another public figure — Julian Gold, M.D., councilmember and two-time mayor of Beverly Hills, serving in 2015 and 2018 — enjoys sharing his story, which is remarkably similar. And remarkably different.
Julian Gold, M.D., two-time mayor of Beverly Hills, California
An Easterner like Himmelrich, Gold grew up in New York City, dreaming of a career “building airplanes” when Vietnam and the draft changed his mind. Refocusing his scientific interest toward biology, Gold went to medical school, moved to Beverly Hills and for the last four decades has been one of Southern California’s premier anesthesiologists, heading his own medical group and co-chairing a prominent hospital anesthesiology department.
Gold’s unexpected cancer diagnosis came in 2006.
“It hit me like a bolt of lightning,” said Gold, when he learned that his night sweats and injuries that wouldn’t heal were signs of acute myeloid leukemia.
Equally powerful was his realization that this lifelong medical professional would have to start thinking and behaving like a patient. It wasn’t easy.
“I had to re-educate myself,” he said, adding that “it took time” to let go, to allow himself to be placed in the care of his doctors, to follow their instructions.
His first course of chemotherapy — performed at the hospital where he worked — was “rough,” he recalled. But it quickly produced a remission. A second round maintained it, but Gold and his oncologist decided the next step should be a stem cell transplant at City of Hope, which had much more expertise and experience in the procedure.
“No one at my hospital minded,” said Gold. “Even the CEO said, ‘Whatever it takes, do what you have to do, and we’re here for you.’”
Not that it went totally unnoticed, certainly not by the transplant specialist who treated both Gold and Himmelrich.
“We didn’t make a big deal about it,” said Forman, who treated Gold. “But the fact is, people go where they see more experience and the level of care resonates with them.”
It was Forman’s expertise that resonated with Gold.
“He’s remarkable,” Gold said. “A very quiet nature, straightforward, not dramatic, and he doesn’t sugarcoat anything. But what impressed me the most was how he spoke about giving me a successful and enduring transplant. I really liked that.”
“Enduring” turned out to be the right description. Like Himmelrich, Gold continues to do well 15 years after his transplant. But unlike Himmelrich, he absolutely credits his cancer experience for motivating him to seek elective office, which he did a few years later, in 2010.
“Beverly Hills is really a small town where everybody knows you,” he explained. “When I got sick, so many people from the community came together to help us, bringing food, taking our daughter to school so we could drive to the hospital. All kinds of things.
“I wanted to find a way to give back, so I got more involved in community work. [Serving on the city council and as mayor] enables me to have a greater impact on people’s lives.”
And yes, like his Santa Monica counterpart, Gold’s “survival” playbook included getting out of bed each day, getting dressed, exercising and maintaining a positive attitude. But Gold goes a little further.
“Be honest about the realities of your situation,” he advised. “Tell yourself that you can get through this. You can be healthy. And remember that recovery is not a straight line. It’s normal to have good days and setbacks.
“And don’t sweat the small stuff.”