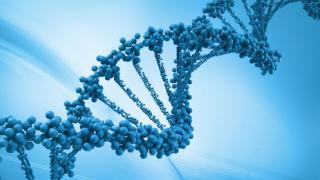 By
Katie Neith
Diabetes
Research
Type 1 diabetes is an autoimmune disease most often seen in children that causes the body to launch an attack on insulin-producing beta cells in the pancreas, rendering the organ unable to produce enough insulin to help turn glucose into energy.
In young children, the disease tends to be very aggressive. Helena Reijonen, Ph.D., associate professor in the Department of Immunology & Theranostics at City of Hope, is working to understand how type 1 diabetes develops in kids and what can be done to stop it.

She recently received a grant from the Leona M. and Harry B. Helmsley Charitable Trust for her research that aims to understand how genetic protection works in type 1 diabetes. There is a strong genetic predisposition to the disease, and this project builds on Reijonen’s finding that most kids who develop it at an early age have the same human leukocyte antigen (HLA) type. HLAs are inherited molecules that are found on most cells in the body and regulate the immune system. However, only about 1 in 10 children with the HLA type identified as a risk factor by Reijonen actually go on to develop type 1 diabetes.
Knowing that HLA type can pose a risk, she is now looking at how genetic protection based on HLA type might work.
Helena Reijonen, Ph.D.
“This area has been understudied,” says Reijonen. “There are certain HLA gene variants that are associated with protection. They are common [in general], but very, very rare in diabetic patients. Even if a child inherits risk from one of the parents but a protective gene from the other, they are protected.”
The mechanism of this protection has been unknown, but Reijonen has found some clues in a unique set of T cells — acting in association with HLAs — that may play a key role. In working to learn more about HLA-mediated genetic protection, she and her team identified a novel population of T regulatory cells in the blood of healthy nondiabetic individuals with protective HLA types. These T cells exert their suppressive function only when encountering a specific protein from islet cells, rather than being globally suppressive.
“The key question was why these cells do not cause autoimmune disease,” says Reijonen. “Is it because they are kept under control by the immune regulatory mechanisms? Or do they display regulatory features themselves and therefore represent ‘beneficial’ autoimmunity?”
The Helmsley grant will help her focus on this area, as well look at the exceptions: the patients who have the protective variants, but in whom the protection has failed.
“Based on the genetic epidemiology studies, we expect that development of pathogenic immunity in type 1 diabetes will depend on genetically determined cellular networks,” Reijonen says. “Revealing critical checkpoints in this process will have the potential to lead to new therapeutic approaches that mimic the process in genetically protected individuals. However, there are still many unanswered questions, and we are dedicated to pursuing this project to advance the field.”
Reijonen is particularly interested in the disease due to her own heritage. She is from Finland, the country with the highest incidence of type 1 diabetes in the world.
“This is a national health issue there,” she said. “There are over 6,000 families in a registry now with blood samples of type 1 diabetic children and their families, and that is the sample we’re studying.”

In addition to the Helmsley grant, Reijonen recently received support from the Margie and Robert E. Petersen Foundation for her overall research to promote children’s health. She also has two new projects sponsored by the Wanek Family Project for Type 1 Diabetes at City of Hope.
In collaboration with Rupangi Vasavada, Ph.D., associate professor in the Department of Translational Research & Cellular Therapeutics, Reijonen is investigating the impact of extracellular vesicles (EVs) isolated from the plasma of type 1 diabetes patients on immune cell activation and function. EVs mediate intercellular communication and may play a role in the autoimmune destruction of beta cells in type 1 diabetes patients.
“We’ve taken plasma from type 1 diabetes patients and healthy controls and treated the immune cells with the EVs,” Reijonen said. “The EVs from type 1 diabetes patients facilitated an inflammatory immune profile. It was very, very clear. This gives us knowledge on cellular communication that will provide a new perspective on the pathology of type 1 diabetes, and potentially a new biomarker for disease monitoring.”
With Enrique Montero, M.D., Ph.D., a research professor in the Arthur Riggs Diabetes & Metabolism Research Institute at City of Hope, she’s exploring CD6, a protein-coding gene expressed by T cells and implicated in inflammatory responses. Specifically, they are looking at the relationship between T cell activation and CD6 binding to two distinct ligands (molecules needed to bind to receptors) on the antigen-presenting cells. There is a clinical antibody targeting CD6 that has proven successful in treating psoriasis, also an autoimmune disease, that is now being tested in type 1 diabetes.
“We’re trying to understand the role of CD6 in type 1 diabetes pathogenesis and the mechanisms of CD6-targeted therapies,” Reijonen said. “It definitely has therapeutic potential to regulate T cell responses, and that’s very exciting.”
Overall, the focus of these studies and Reijonen’s work in general is to figure out what causes disease progression.
“Sometimes the disease takes years to manifest, or we see antibodies that are indicating its presence, but there is no clinical manifestation,” she said. “So, if we could predict who might get it, there could be a therapeutic window to prevent type 1 diabetes. That’s our ultimate goal.”