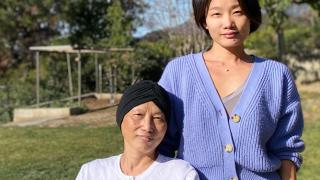 By
Maxine Nunes
COVID-19
Patient Care
Success Stories
In December 2019, full of joyful expectation, Yuyuan Lin and her husband flew from China to California to spend three months with their daughter, Yi Luo, and their two young grandchildren.
It was a wonderful visit, but three weeks before they were to return home, Lin discovered a swelling under her arm.
“I thought it was just inflammation,” she said, speaking in Mandarin, with Luo translating. “And we had no insurance here, so I wanted to wait until I went back to China to get it checked out.”
Then the unexpected blindsided them.
The COVID-19 pandemic suddenly transformed the world as we know it. Flights to China were canceled, and the couple was stranded here.
As spring turned into summer, the lump began to grow. By late August, it was so big it could no longer be ignored.
Luo drove her mother to urgent care.
“After the examination, the doctor looked concerned. He told me it didn’t look good to him,” said Luo. “That was the moment I panicked. Seriously panicked.”
A mammogram and scan, followed by a biopsy, confirmed the worst. Lin had Stage 3 triple-negative breast cancer — an aggressive form of the disease that is difficult to treat — and it had spread to her lymph nodes.
“I felt lost,” said Lin. “I needed medical help but didn’t know how I could get it.”
Luo contacted the Chinese Consulate to see if there was a way for her parents to return to China — but they would have to quarantine when they arrived and would not be able to see a doctor for two weeks. The consulate advised seeking treatment here.
The problem was, without U.S. health insurance, the family did not know how they could pay the medical costs. Luo was a single mom who worked part time for a nonprofit organization.”
“I remember that afternoon I was sitting in my car, and I didn’t know what to do,” Luo said. “But I had heard that City of Hope, with all their research and advanced technology, was the best place for cancer. So I called them.”
She was connected with their Center for International Medicine (CIM).
They referred the family to an agent familiar with the kind of insurance they needed and arranged a consultation with Mina Sedrak, M.D., M.S. who specializes in both breast and geriatric oncology.
Mina Sedrak, M.D., M.S.
Since the pandemic began, City of Hope has not allowed most visitors, so the CIM assigned a navigator/translator to accompany Lin for her appointment and, after dropping her mother off at the hospital, Luo took part in the consultation by phone.
Sedrak felt immediate empathy for Lin’s situation. When he was 10, he and his family had come here from Egypt and had spoken no English.
“COVID is such a difficult and challenging time for everyone, but especially for immigrants and the underserved,” he said. “On top of that, add a diagnosis of advanced cancer in a country where you don't know the language — and I understand what she was going through.”
Chemotherapy was scheduled to start Sept. 1, the day her health insurance took effect, but after weeks of scans and tests and anxiety, Luo’s energy crashed and she had to postpone it.
And again, events beyond anyone’s control interfered.
On Sept. 16, the day she was to finally begin treatment, the Bobcat Fire — one of the most devastating in Southern California history — was raging through the Angeles National Forest, not far from the main City of Hope campus in Duarte.
Lin had just had her chemotherapy port inserted when City of Hope recommended postponing her infusion because of poor air quality due to the fire.
Her treatment was finally able to begin on Sept. 19.
The side effects sometimes exhaust Lin or cause a fever, but on her last visit, there was very good news.
“The tumor is shrinking,” said Sedrak. “That’s the goal, so that she can be taken to surgery and have it removed.”

Still, the challenges for this family are not yet over.
Back in July, Luo applied to the U.S. Citizen and Immigration Services for a visa extension for her parents. Their current visa ran out at the end of 2020 — and despite every effort to follow up, they have heard nothing back.
Without legal status, both Luo’s parents could be deported, even banned from ever returning to the U.S. And there’s an even more immediate concern — if they have not secured an extension by Feb. 1, their health insurance will be canceled.
Luo had given up her job to care for her mom and manage all of the issues they were facing, which created even greater stress for the family.
But there’s a bright side, too.
After a newspaper story about Lin’s situation appeared, two women — whom Luo had never met — got in touch about setting up a GoFundMe drive to help with medical bills. Among the contributors was their City of Hope physician, Sedrak.
This challenging time has also been life-changing for Lin’s husband, Cheng Xing Luo, who has learned a whole new set of skills.
“My mom took care of my dad most of his life, but now he does everything for her,” Luo said. “Oh my gosh, he does the laundry and makes three meals a day for all of us — and sometimes five on a good day when my mom is really hungry.”
Whitney Cheng, Lin’s navigator/translator, is always there to answer questions remotely through the Chinese app WeChat. And the two women have developed a personal friendship, talking about their families and sharing recipes.
Lin has also found that medical care here is quite different from China.
“I told my friends that City of Hope sent me a holiday present, and they also have classes teaching you how to exercise,” she said. “My friends didn’t believe me, and I can’t believe it, either.”