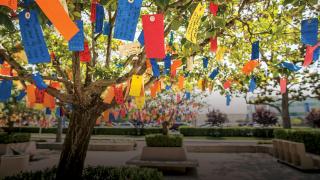 By
Abe Rosenberg
Research
Norman E. “Ned” Sharpless, M.D., is an impatient man.
“We’re closing in on the day when we’ll say, ‘This is the best therapy for your cancer and we know it’s going to work,’” he said. “Based on our understanding of cancer today, we ought to be closer to that point than we are. It’s still not fully realized.”
Norman E. "Ned" Sharpless, M.D., director of the National Cancer Institute
Brimming with facts and figures delivered in a friendly but intense, rapid-fire speaking style, Sharpless is entering his fourth year as director of the National Cancer Institute and is presiding over the 50th anniversary of the legislation largely responsible for creating the research program of the agency he heads.
It was back in 1971 when President Richard Nixon signed the second National Cancer Act (President Franklin D. Roosevelt signed the original in 1937), expanding the institute’s mission and jump-starting the development of NCI-designated comprehensive cancer centers across the U.S. (City of Hope is one of 51 such facilities).
Nixon considered this the “most significant” achievement of his administration, passionately pressing for it in his State of the Union message, declaring “The time has come in America when the same kind of concentrated effort that split the atom and took man to the moon should be turned toward conquering this dread disease. Let us make a total national commitment to achieve this goal."
He called it the War on Cancer.

Fifty years later, the “war” has produced encouraging results. The cancer mortality rate is dropping, and the pace of that decline is accelerating. Nevertheless, in the U.S., cancer still causes more than 600,000 deaths, and there are 1.8 million new diagnoses, each year.
As the top “general” in this war, Sharpless has surveyed the battlefield, savoring the victories and anticipating fights still to come.
“When I started out in medicine,” he recalled, “we basically had one treatment for each disease. And none of them was very good.”
The biggest victory, Sharpless says, has been one of thinking. We no longer see cancer as a single disease, but hundreds of them, each different in its own way.
“We once believed all cancer was the same,” he said. “We have a much more complete understanding today. We know, for example, that two patients with seemingly identical cancers may respond to two totally different treatments.”
Sharpless says enormous additions to our knowledge of human biology at the molecular and genetic level have opened the door to a potential “golden age” of cancer treatment, where every tumor has a unique signature and where personalized therapies are crafted for each patient using drugs that target specific markers on cancer cells or even reeducate the body’s immune system.
But all that potential needs to be handled correctly.

“It’s made medical oncology much tougher,” he added. “Because it means there can be multiple approaches to treating the same tumor. We haven’t had enough time yet to integrate all of it, to consistently know which treatment is right for which patient.”
But we’re getting there. Immunotherapy, he says, may be one of the best paths.
“Now there’s a fourth modality, in addition to surgery, chemo and radiation,” declared Sharpless. “Immunotherapy may never replace the other three, but it’s so important. It gives us an opportunity to help many patients for whom we previously had little to offer.”
Perhaps nowhere else has this new thinking produced more astounding results than at City of Hope, where Stephen J. Forman, M.D., a top “warrior” against cancer for 40 of those 50 years, has a list of his own.
“Our game-changers start with stem cell transplants,” said Forman, director of City of Hope’s Hematologic Malignancies Research Institute. “We were one of the first [to employ stem cell transplants to treat leukemia], and it’s a very big deal.” (Since 1976, City of Hope has performed more than 17,000 transplants.)
“Then there is the work of Arthur Riggs,” said Forman. At City of Hope since 1969, Riggs, the Samuel Rahbar Chair in Diabetes & Drug Discovery, is world-renowned for helping to develop synthetic insulin. But perhaps even more important, his discoveries in the cancer arena, especially with DNA methylation and the development of monoclonal antibodies, effectively began the biotech revolution. What’s more, he has donated enormous sums derived from licensing royalties, enabling City of Hope to expand dramatically and recruit world-class scientific talent.
“And now,” added Forman, “our work with CAR T cells, a true breakthrough in immunotherapy.” CAR T cell  therapy, the process of reengineering a patient’s own immune cells to attack cancer, has produced two Food and Drug Administration-approved treatments for blood cancers, and holds enormous promise in the treatment of solid tumors.
Forman also shares the impatience of fellow oncologist Sharpless.
“Our patients are ill. They’re looking to us. We want to help them right now. Yes, we’ve done some magical things, but not magical enough. I’ve seen things that helped, but they could have helped more if only we’d worked faster, harder.”

Looking to the Future

So, what about the next 10, 20 or 50 years? Can we “cure” cancer?
Most experts believe in the old adage, “An ounce of prevention is worth a pound of cure.” Sharpless and his colleagues are convinced they could drop the cancer rate even further and faster by stopping the disease before it starts, through improved health behaviors like quitting smoking, exercising more and eating more healthfully.
As for treatments, “There are lots of bright spots,” said Sharpless. “We’re going to see 30 to 40 new drugs a year that will be successful.” His definition of success includes much more than simply keeping people alive. “I want not only better therapies but less awful therapies. I want to drive down the bad effects of cancer, like the toxic side effects. And I think there’s a real opportunity here.
“It’s an exciting time.”