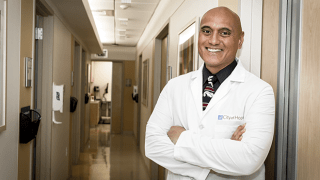 By
Malcolm Bedell
Diabetes
Raynald Samoa, M.D., endocrinologist and assistant clinical professor in the Department of Diabetes, Endocrinology & Metabolism at City of Hope, plays an unusual role in the treatment of some types of cancer: He specializes in treating patients with preexisting type 1 or type 2 diabetes, as well as patients who develop diabetes as a side effect of some types of cancer treatment.

Inside the Endocrine Clinic

“In our endocrine clinic,” Samoa said, “We treat patients on an outpatient basis, and we do a lot of things that are sort of the bread-and-butter of other endocrinologists: We manage diabetes. We manage thyroid conditions. We treat thyroid cancer and hormonal disorders. But we also see a lot of patients who need metabolic help.”
Samoa sees patients who are at several different stages of cancer treatment, as well as patients at risk for type 2 diabetes who may be able to use lifestyle modification regimens to offset their chances of developing type 2 diabetes, and potentially change the course of their cancer progression as well.
“We’re starting to see patients at earlier stages of their [cancer] treatment who are showing early signs of metabolic derangement,” he said. “We evaluate these patients in clinic to determine how their insulin resistance came about. We talk about the four pillars of treating insulin resistance (including eating healthier, getting more exercise, getting optimal sleep and managing stress). And we try to institute environmental and behavioral change. Here at City of Hope, we use these modifications specifically to see if they change the course of cancer.”

Insulin Resistance as a Gateway to Cancer

“Unlike type 1 diabetes, where there’s an absence of insulin, type 2 diabetes comes from metabolic changes that make it harder for people to use their insulin, and they become insulin resistant,” Samoa said. After a prolonged period of poor nutrition, lack of exercise, high consumption of alcohol, poor stress management or other lifestyle issues, the body can no longer use insulin efficiently. “Even though they’re making a lot of insulin, they’re not making enough to overcome their resistance,” Samoa said.
“This creates an environment in the body that’s beneficial to cancer. One of the things insulin does is make things grow in the body. And high blood sugars are very effective in feeding cancer cells,” Samoa explained. “So when your body is producing high amounts of insulin, and blood sugars are relatively high, that provides the optimal environment for cancer cells to flourish.” Thus, while the type 2 diabetes treatment protocols are essentially the same for cancer and noncancer patients, “controlling blood sugar becomes even more important to the care of patients being treated for cancer.”
Some cancer treatments can also increase patients’ susceptibility to type 2 diabetes. “For example, steroids like prednisone are used in many chemotherapy regimens, and they significantly decrease one’s ability to control blood sugars,” Samoa said.
Many of the other side effects of cancer treatment, including loss of appetite or muscle loss due to reduced physical activity, can cause metabolic changes that can lead to type 2 diabetes. “This leads to a sort of ‘perfect storm’ for the disease,” Samoa said.

Some of the most effective forms of cancer treatment, including immunotherapies that use the body’s own immune system to help fight cancer cells, can also cause type 1 diabetes in patients with no prior history of the disease. Checkpoint inhibitors, for example, which help block proteins in the body that inhibit this immune system response, may also stop the pancreas from producing insulin. While this side effect is uncommon, it may lead to clues about how type 1 diabetes develops in noncancer patients.
The laboratory profile of type 1 diabetes caused by the use of checkpoint inhibitors is different than “regular” type 1 diabetes. According to Samoa, in a cancer patient with treatment-related type 1 diabetes, “we’re seeing that the beta cells of the pancreas don’t appear to be damaged — but we know they’re not producing insulin. One of the theories is that the immune system may be blocking the pancreas from functioning.”
“Checkpoint inhibitors target certain markers in the body, which allows us to narrow the field for which of those markers lead to diabetes,” Samoa explained.

“Diabetes and cancer are tied together. Exploration of one leads to new discoveries about the other,” Samoa explained. But research is only part of his work. Helping cancer patients untangle the path that led to their insulin resistance is a major part of Samoa’s day-to-day life as a clinician.
“I run the MetFit program here at City of Hope, which is a lifestyle modification program that tries to help people reduce their insulin resistance to help prevent or manage chronic disease like high blood pressure, diabetes and liver disease.”
Samoa’s dedication to lifestyle modification extends beyond the walls of City of Hope. He’s also organized a version of his program that takes place in the community, called “Roots of Hope," made possible by a grant from the Conrad N. Hilton Foundation. In a partnership with the Episcopal Diocese of Los Angeles, Samoa hopes to spread his message in the community before patients have to set foot in a hospital. “Part of the reason I’m so interested in lifestyle modification is its potential to prevent cancer,” Samoa said.
This kind of “whole body” approach to overall lifestyle modification as a means of helping to treat, better understand, or even prevent cancer and diabetes is unique to City of Hope. “There are no models for this kind of treatment to copy,” Samoa said. “We’re building it from the ground up.“
*************
To support diabetes research at City of Hope and join our quest for a cure, click here.