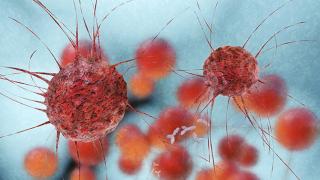 By
Zen Vuong
Research
City of Hope scientists have identified and developed two potent small molecules that appear to suppress tumor growth in multiple cancers even when other treatments cease to work, possibly due to the development of drug resistance.
Called CS1 (or bisantrene) and CS2 (or brequinar), these cancer inhibitor compounds are part of a protein known as “fat mass and obesity-associated protein.” Nicknamed FTO, the protein plays a critical role in cancer development and progression, primarily because it regulates cancer stem cells and immune evasion. In other words, FTO promotes the growth, self-renewal, metastasis and immune escape of cancer cells.
Jianjun Chen, Ph.D.
“The cancer inhibitors we developed are at least 10 times more effective in killing acute myeloid leukemia cells than several previously reported FTO inhibitors,” said Jianjun Chen, Ph.D., the Simms/Mann Family Foundation Chair in Systems Biology at City of Hope and corresponding author of the new study. “In the near future, we should use these two compounds alone or in combination with other therapeutic agents such as targeted therapy, standard chemotherapy, immunotherapy or radiotherapy to treat patients with FTO-high cancers.”
Examples of FTO-high cancers include acute myeloid leukemia (AML), an aggressive brain cancer called glioblastoma, pancreatic cancer and breast cancer. The study, published in the journal Cancer Cell on June 11, provides new insight into how cancer stem cells replenish and visibility into how cancer evades our immune system. It highlights the possibility that targeting FTO with potent inhibitors could eventually become a treatment for certain cancers.
In the study, City of Hope scientists demonstrated that the two new FTO inhibitor compounds they created had potent anti-tumor effects and substantially improved overall survival in mice with AML or a solid tumor such as breast cancer.
Nearly 11,200 people are expected to die due to AML in 2020. The five-year survival rate is 29%, according to National Institutes of Health SEER data. Breast cancer is the second most common cancer among U.S. women.
Chen and his colleagues saw the need to address these big problems. The Chen lab has been conducting research on RNA modification in cancer for eight years and is a pioneer in this field — developing personalized treatments that will enable the practice of precision medicine. The lab began working on the CS1 and CS2 project three years ago when Chen first arrived at City of Hope.
Chen’s team noted that many cancer patients either do not respond to treatments that are currently available such as chemotherapy, targeted therapy or immunotherapy, or that they respond to the therapeutics in the beginning but relapse later due to cancer-regenerating stem cells and the escape of cancer cells from the body's immune surveillance.
It turns out that modifying FTO or using small molecules to inhibit FTO interrupts the supply chain that enables cancer to develop and progress. Studies showed that treatment with a relatively low dose of CS1 or CS2 (5 mg/kg/day 10 times every other day) could, at the very least, double the median survival in mouse models with AML.
Rui Su, Ph.D., lead author
“Our study suggests that combining FTO inhibitor treatment with other therapies will improve patient outcomes because this method will eradicate cancer stem cells and mechanisms that suppress the immune system,” said Rui Su, Ph.D., lead author of the study and assistant research professor in the Department of Systems Biology at Beckman Research Institute of City of Hope.
CS1 and CS2 prevent FTO from connecting with target messenger RNAs, including cancer-causing genes MYC and CEBPA, as well as immune checkpoint gene LILRB4.
Because CS1 (bisantrene) and CS2 (brequinar) have been tested in multiple clinical trials under the guises of other objectives, Chen and his colleagues believe this basic research has access to a freeway entrance that will fast track it into clinical trials. The National Institutes of Health (NIH) have already funded the next step: The Chen lab is working to further optimize CS1 and CS2 to develop improved FTO inhibitor compounds that are more efficacious with minimal side effects for humans.
Scientists from Harvard Medical School, China Medical University, Cincinnati Children's Hospital Medical Center, The First Affiliated Hospital of Sun Yat-sen University, Tianjin University, the Shanghai branch of the Chinese Academy of Sciences, Houston Methodist, The First Affiliated Hospital of Zhejiang University, Midwestern University and Shanghai Jiao Tong University School of Medicine also contributed to this research. The study used the Hematopoietic Tissue Biorepository core at City of Hope, which is supported by the National Cancer Institute of the NIH.