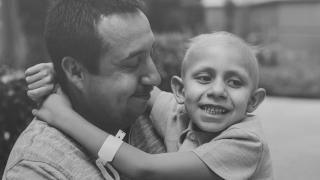 By
Letisia Marquez
Patient Care
More than a year after his transplant at City of Hope, Joseph Montañez, 8, finally had the chance to thank the woman “who gave me the good blood.”
Amid tears and numerous heartfelt “thank yous” via Zoom, Joseph, his parents Ashley and Philip, and other family members met Vanessa Flores, the woman who donated bone marrow to give Joseph another chance at life, and her husband, Arnie. Joseph, the Montañez’s only son, was 6 years old when he was diagnosed with acute myeloid leukemia in January 2019. He would need a bone marrow transplant to beat the cancer.
“I cannot thank you enough for what you have done for my family,” Ashley Montanez said. “He is doing so awesome. We appreciate you. Welcome to our family.”
“I’ve been waiting for this because there are no words I can explain to you on how grateful and blessed we are for you to do this for him,” said Crystal Lara, Ashley’s sister. “Joseph is my heart. … To see what they went through, to see the journey that Joseph has gone through. It’s just a blessing that you were able to donate and help him.”
Flores, a resident of Santa Teresa, New Mexico, is also a mother. She has three children — one son, Nathan, who traveled with Flores to donate bone marrow and is currently stationed in Japan with the U.S. Marine Corps, and two daughters, Nataly, a nurse, and Madison, a high school student. As a mother, Flores said she thought a lot about the patient and his family over the last year.
Joseph, under the care of City of Hope’s Nicole A. Karras, M.D., a pediatric oncologist, received his transplant at City of Hope on June 21, 2019. Karras said one of the reasons Joseph’s transplant process went smoothly was because the boy and Flores matched so well.
“Throughout this year, Ashley, I’ve had you on my mind the most because I know … as a mother seeing the child in a hospital bed, having to take medications that they don’t like, I can imagine how hard that was,” Flores said. “I really had you in my prayers, hoping this would work.”
They shared notes on similarities between Joseph and Flores — he did not have curly hair before the transplant, but his hair is now darker and curlier, like Flores’.
They both share a love of rollercoasters, Disneyland and scary movies. Joseph’s nickname is Godzilla.
The families made plans to meet in person after the pandemic. Joseph and Flores look forward to riding rollercoasters together, and more importantly, they want to hug each other.
“After his transplant, things just started to seem to fall back into place,” Ashley Montanez told Flores. “But we wouldn’t have any of that if it was not for you. I appreciate you guys so much. Thank you so much.”
Flores told Joseph’s family what many bone marrow donors tell the patients whose lives they saved. “I would do it all over again,” she said.
View of a video of Joseph and Flores’ virtual reunion here.
To sign up to join the bone marrow registry, visit Be The Match.