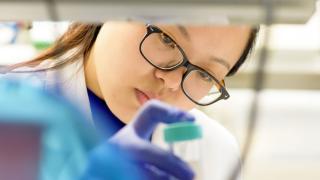 By
Abe Rosenberg
Diabetes
Research
Why should City of Hope, a renowned cancer center, devote so much time, effort and resources to the study and treatment of diabetes? Aren't they very different diseases?

Well, yes and no.

To begin with, a great many people struggle with both diabetes and cancer at the same time.

Ever-growing research strongly suggests that none of this is random or coincidental. Rather, it's clear that, from biology to risk factors to treatment options, cancer and diabetes are intimately related in many ways.

“Cancer and diabetes are two sides of the same coin,” asserted Debbie Thurmond, Ph.D., chair of the Department of Molecular & Cellular Endocrinology at the Diabetes & Metabolism Research Institute at City of Hope. “They are disruptions of the body's normal metabolism.”

That may help explain why obesity is a major risk factor for both diseases. Excess fat may begin that disruption process, as well as increased inflammation, a known trigger for both diabetes and cancer. Fat deposits located around internal organs secrete chemicals and send signals which make cells more aggressive, initiating tumor growth, while also creating insulin resistance, leading to type 2 diabetes.

And one illness may feed on the other. Some studies suggest that abnormally high levels of insulin, typical in type 2 diabetics, can cause cancer. At the same time, a buildup of blood sugar is exactly what some cancer cells are waiting for.

“Cancer cells love glucose,” added Rama Natarajan, Ph.D., chair of the Department of Diabetes Complications & Metabolism, as well as an expert in molecular oncology. “It's their primary fuel, and we've known this since 1930, when the Warburg effect was identified.”

Nobel Laureate Otto Warburg demonstrated that cancer cells consume and metabolize glucose at 200 times the normal rate. In fact, PET (positron emission tomography) scans are designed to detect the presence of cancer in the body by locating areas of high glucose consumption.

In theory then, a medication that lowers blood sugar levels in diabetics could also potentially fight cancer, by “starving” malignant cells to death. Which is why many cancer researchers are looking closely at metformin, the No. 1 drug for treating type 2 diabetes. There is evidence that diabetics who take metformin may be less likely to develop cancer, and, should they contract the disease, significantly less likely to die from it.

Some treatments, however, may fight one disease while making the other worse.

“There are forms of chemotherapy that induce insulin resistance, bringing on symptoms of diabetes,” said Arthur Riggs, Ph.D., director of the Diabetes & Metabolism Research Institute at City of Hope. It was Riggs's pioneering work in the 1970s that led to the development of synthetic human insulin.

Worse, immunotherapy, one of the most exciting advances in cancer treatment, may actually bring on the less-common type 1 diabetes, which is essentially an autoimmune disorder. With immunotherapy, the body's immune system is “unleashed,” and it may attack critical insulin-producing cells in the pancreas. “Immunotherapy,” said Riggs, “can cause permanent diabetes. It's a serious complication.” Serious enough for some of Riggs' colleagues to wonder if they've crossed the “Do No Harm” line. Riggs doesn't think so. “It's progress,” he said. “Immunotherapy can save someone's life, and the diabetes it leaves behind is treatable.”

All of which points to the logic, even the necessity, of experts in both cancer and diabetes working together. City of Hope has understood this for 40 years, culminating in 2014 with the opening of its Diabetes & Metabolism Research Institute, and then in 2016 with the establishment of The Wanek Family Project for Type 1 Diabetes at City of Hope. The opportunities for collaboration are enormous, and the need for such cross-pollination is clear.

“We need to be worried about each other,” said Thurmond, the Ruth B. & Robert K. Lanman Chair in Gene Regulation and Drug Discovery Research, “exactly because treating one disease may wreak havoc with the other, so we need to communicate and share information, and that's exactly what we do.”

“It's an educated guess,” said Riggs, the Samuel Rahbar Chair in Diabetes & Drug Discovery, “but I'd say the majority of our diabetes researchers are also working on cancer, and many of our cancer biologists are doing work relevant for diabetes.”

Perhaps nowhere is that collaboration more critical than in islet cell transplantation, a promising experimental treatment for type 1 diabetics. Cell clusters from a donor pancreas are implanted, in the hope that they'll begin to produce insulin and regulate blood sugar.

When embarking on such complex transplant surgery, it's invaluable to be able to confer with colleagues who've performed over 15,000 bone marrow and stem cell transplants to treat leukemia and other blood cancers.

“Rejection, for example, is always a possibility with any transplant, so you need to suppress the immune system” said Riggs. “The bone marrow folks on the cancer side know more about immunosuppression than anybody else.”

It works both ways. Diabetes researchers are developing a treatment that may one day cure the disease, and carry an added benefit: It may also halt graft-versus-host disease, a serious obstacle in bone marrow transplants.

Other ongoing collaborations may bear fruit in the near future. Among them:

Ultimately of course, the common goal is to eradicate both cancer and diabetes. While no one can say how long that will take, it's reasonable to believe that, with both camps working side by side, they just may pull it off. One step at a time.

“Yes, to a researcher, 'cure' is a four-letter word,” said Thurmond. “We don't like to send out false hopes. For now though, curing diabetes within a decade, without making cancer worse ... that's the plan!”