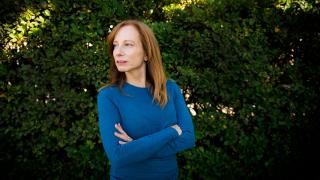 Stacy Kimmel is not being flippant when she describes breast cancer as an inconvenience. But even if she were, having had five conversations with someone in a white coat saying, âYou have cancer,â would give her permission.

ââCancer is an inconvenience for me,â thatâs how I thought about it,â said Kimmel, 49, describing her reaction after first being diagnosed. âIt was getting in the way of my daily life. I also knew it was potentially life-threatening, but it was an inconvenience for a 38-year-old with a child.â

Viewing cancer this way is an emotional reaction that could easily bend to darker thoughts â of losing everything, of not being around for her daughter. Kimmel is unwilling to do that.

âWith a diagnosis like this you either keep fighting or you give up,â said Mike Chen, M.D., Ph.D., one of Kimmelâs physicians at City of Hope. âStacy is a go-getter and she has a lot to live for. Sheâs a fighter.â

Kimmelâs resilience, her defiant mindset, may â according to a review of studies â reduce distress and improve quality of life. Coping this way seems most effective when it begins at diagnosis, which may have implications for the often-tumultuous disease course.

âIt was all about trying to move forward,â said Kimmel. âPart of my reaction was me saying to myself, âI want to be done with this. I want to be back to running, back to yoga, back to playing with my kid, you know?ââ

My To-Do Is To Get A Mastectomy Today

In 2006, Kimmel was driving cross country to a new job in Nashville, Tennessee, when she first felt a painful, burning sensation in her chest.

The soreness and discomfort felt a lot like breast feeding, but her daughter was past that stage. When bloody discharge began leaking out of her breasts, Kimmel knew something was wrong.

âI immediately knew. I just knew,â said Kimmel. âWhen they found the tumor, it was hardcore. It was, âWhat? I have a 3-year-old. I just moved cross country. What am I going to do?ââ

Days later, she was diagnosed with Stage 0 ductal cell carcinoma, an early-stage cancer in cells lining the milk ducts of the breast. Despite the good prognosis, Kimmel felt she needed to be aggressive.

âI figured Iâm young, I have a long life to live,â said Kimmel, who decided to undergo a bilateral mastectomy. âSo, letâs just be as aggressive as possible.â

During the mastectomy, doctors in Nashville discovered the cancer was not local as they suspected, but had breached the ductwork.

âThey saw that it was actually invasive,â said Kimmel. âIt had gone past the ductwork and there was a big tumor.â

It was around this time that instinct â survival tinged with strength â kicked in for Kimmel.

She began doing what she does best: composing a to-do list. Checking tasks off lists was the habit of a lifelong career striver. She figured that same process would help her map out a plan to fight cancer.

âI was always very list-driven,â said Kimmel. âSo, it would be, âMy to-do is to get a mastectomy today. My to-do is to tell the plastic surgeon, âYou get two months to fix my breasts. Thatâs it.ââ

For two years after the mastectomy, Kimmel lived a relatively normal life and had no symptoms. But at 40, the overheated, swollen feeling in her breast area returned, this time suddenly.

âThat time, I felt lumps under my armpit,â she said. âI figured it was just swollen lymph nodes, you know, people get infections all the time. But they did an ultrasound and said, âNo, you have cancer again.ââ

'Brain Cancer, That Changes Everything'

âItâs around the corner here,â says Kimmel, gesturing. She is walking to an appointment at City of Hope, bathed in the fluorescent glow of hospital hallways she knows well. It is November, a few weeks before Christmas, and Kimmel will soon get the results of a brain MRI.

As she walks, Kimmel describes the level-II ancillary dissection performed on her after her second breast cancer diagnosis.

âThey went into the armpit and removed a section of lymph nodes,â she said. âAnd within that margin they then determine how many are cancerous â¦â

Then she describes the search for gatekeeper lymph nodes, and the risk, when a patient undergoes surgery, that the procedure can unleash malignant cells to distant sites in the body.

âYouâre pretty steeped in medical jargon,â an observer remarks. âYou sound more like a doctor than a patient.â

âItâs funny, I have had a few friends say, âWho would have thought you would know so much doctor lingo?ââ said Kimmel. âIâm dyslexic so I always joke with my friends, âYeah, I canât spell it, but I can tell you what it is.ââ

Kimmel laughs, a chortle that comes more often â and much easier â than one would expect considering all she has been through.

Her mood on this day belies a sobering anniversary. Almost three years ago, on Christmas Eve, Kimmel was diagnosed with metastatic breast cancer. A lime-sized tumor had developed in her brain, marking her third bout with cancer.

âBreast cancer always seemed external to me, like it was on the outside of my body,â she said. âI know itâs not, clearly, but itâs like a cut on your finger. Brain cancer? That changes everything.â

Months before her third cancer diagnosis, Kimmel had moved to Los Angeles to be closer to family. Later, she became a creative director in the marketing department at City of Hope. She says the more she became acquainted with the caliber of care she was promoting, the bigger the pull she felt to move her own care to the institution.

"I was awed by the pace of research going from lab to doctor to patient," said Kimmel. "As a patient, I felt like I would be on the cusp of the newest and best treatment."

Kimmel had been seeing Joanne Mortimer, M.D., a breast cancer oncologist and the Baum Family Professor in Women's Cancers at City of Hope, when she began to have painful visual auras. They would encroach her visual field slowly, âlike ripples on a pond,â she said.

Her primary care doctor prescribed migraine medication, adding, according to Kimmel: âIf they donât work after a week, I want you to go to your oncologist and get a brain scan." âWhen he said that, I knew,â said Kimmel. âYou canât walk through this disease for as long as I have and not know thereâs something wrong when you have certain symptoms.â

A week later, when the migraine medications proved impotent against her visual seizures, Kimmel got a brain scan. It revealed the lime-sized tumor â lodged in the occipital lobe, the visual region of the brain. The location explained the auras.

âShe was very scared,â said Chen, an associate professor in the Division of Neurosurgery, and Kimmelâs neurosurgeon. âLuckily for her, even though the tumor was large, we knew we could go in and safely take it out.â

Soon after the surgery, and a series of radiation treatments, Kimmel recovered, but a year later, she suddenly had insatiable thirst and diabetes symptoms. Something was off with her hormones and a brain scan eventually revealed a tumor in her pituitary gland. A year after that tumor was removed, a lesion cropped up in the same area where Kimmel's first brain tumor had formed.

It was three dizzying developments in two years.

âStacy has been through several brain surgeries," said Chen. "But in looking at each problem individually, at that time, we knew we could deal with it."

The cancer cells wending their way through Kimmelâs system, beginning on that drive to Nashville, behaved unusually.

When it was first discovered in her breast, the tiny cancer cluster tested estrogen-positive, meaning its growth was fed by the hormone, estrogen. Yet, despite aggressive treatment, including the mastectomy and hormone therapy, the cancer returned.

Testing on tumor cells that eventually burrowed into Kimmelâs brain revealed yet another rarity: The cells were estrogen-positive. According to Mortimer, estrogen-fed breast cancer cells almost never spread to the brain.

Kimmelâs cancer was remarkable for how it deviated from almost everything understood about how breast cancer behaves.

âIâll bet I havenât seen two people like her,â said Mortimer. âShe had a three-millimeter cancer that was treated with mastectomy. She should never, ever, ever have seen it come back again.

âItâs highly unusual that she did recur, but sometimes cancers behave atypically, and hers was atypical at so many levels.â

Now, almost 12 years since she was first diagnosed, Kimmel takes each difficult chapter in her cancer story in stride. She gets a boost from her faith that however the next chapter unfolds, there will be an option for her at City of Hope.

âWhat I respond to most is the passion of the physicians and researchers, the people connection here,â Kimmel said. âThere is no doubt theyâve saved my life multiple times.

âI mean, Iâve had not a second chance, a third chance, a fourth chance, but a fifth chance at life. Who can say that?â