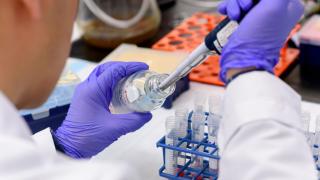 “Hit me with whatever you’ve got, the strongest stuff you have!”

So said Michael R.,* a determined 65-year-old businessman from Orange County, California, upon hearing he had pancreatic cancer.

It wasn’t a total surprise. His father had died of pancreatic cancer 20 years earlier. Michael carries the BRCA2 genetic mutation, which can indicate a high risk for the disease.

There had been other warnings.

A few years after his father’s death, Michael developed type 2 diabetes. Doctors controlled it with metformin, the commonly prescribed treatment. But while his blood sugar stabilized, his pancreatic function began a steady decline. That was a warning sign.

Many studies have shown links between diabetes and pancreatic cancer. Living with diabetes for a long time is believed to put one at risk, possibly because of high levels of inflammation. Conversely, a pancreatic tumor can stymie insulin production and cause diabetes.

So, in early 2020 when Michael suddenly began losing weight — 40 pounds in about six weeks — and experienced stomach distress and jaundice, he thought of his dad.

“I remember going through all the symptoms,” he said. “It was déjà vu.”

COVID-19 complicated matters. The pandemic had just broken out, disrupting work, home and family life, and overwhelming hospitals. Initially, Michael thought his symptoms were simply “COVID-related stress.” He wanted to see a specialist for a computed tomography scan, but couldn’t find a facility that was open, or one willing or able to provide one.

A physician friend helped him get an appointment at City of Hope, where cancer care continued uninterrupted throughout the pandemic, with robust safety protocols in place to protect patients and staff.

Once diagnosed, Michael says things happened quickly. Surgeons, oncologists and gastrointestinal specialists all came together to formulate a plan of attack.

“I was so impressed with the efficiency and professionalism,” he recalled. “Everything seemed to go on autopilot, all well-coordinated between the departments.”

A stent was inserted to clear a blockage in Michael’s bile duct. The jaundice faded within 24 hours. The next hurdle would be removal of his diseased pancreas. Before that could happen, it was necessary to shrink the tumor, which was also compromising Michael’s vascular system. Chemotherapy was tried, but because of spleen damage and a low platelet count, the drugs were discontinued.

“Then they tried radiation,” said Michael. “And it worked. The tumor shrunk and my [blood] marker normalized.”

A team led by liver and pancreatic surgeon Gagandeep Singh, M.D., clinical professor in the Division of Surgical Oncology, Department of Surgery, put Michael through nearly 16 hours of surgery, removing his pancreas, spleen, gall bladder and part of his stomach. Michael came through the procedure remarkably well and was able to go home in less than two weeks, just in time for Thanksgiving.

Although the surgery largely removed the cancer threat, Michael was now left with an additional challenge: on top of his type 2 diabetes, Michael now had a unique form of the disorder, known in some quarters as type 3c.

'Hundreds' of Types of Diabetes

Now, if you’re surprised by the existence of a third variety of diabetes, join the club. And frankly, it’s just the tip of the iceberg.

“There are probably hundreds of different types of diabetes,” said Ping H. Wang, M.D., a renowned diabetes expert and chair of City of Hope’s Department of Diabetes, Endocrinology & Metabolism. “What they all have in common is high blood sugar.”

Wang likes to point out that diabetes is actually a syndrome, rather than a single disease, and many conditions can trigger it. Certain chemotherapies can lead to diabetes, as can some transplant procedures, cystic fibrosis, pregnancy and childbirth (gestational and neonatal diabetes), HIV infection, steroid use and more. There are also hundreds of genetic markers for diabetes, making it a disease of genes as well as environmental factors.

All the more reason, Wang says, to tailor treatment for each and every individual with diabetes. This is not a one-size-fits-all condition. “It’s important to stress that diabetic treatment must be personalized, because every person has a different biochemical defect,” he explained.

In Michael’s case, the cause of his type 3c was easy to identify. With his pancreas removed, Michael’s body could no longer produce insulin. As with type 1, Michael would need insulin provided through artificial means. But unlike type 1, in which the pancreas still produces enzymes critical to digestion, Michael would now need to take those enzymes in pill form before every meal.

He calls his association with Wang “the perfect alignment of the planets.” Wang had recently arrived at City of Hope’s Newport Beach facility. What could be better than having a diabetes superstar so close to home? (Wang has since moved to City of Hope’s new Orange County cancer center in Irvine. Michael moved right along with him. “So now it’s a 20-minute drive,” he said with a smile.)

Wang says he understood Michael’s situation “immediately,” especially the cancer-diabetes correlation. “People think cancer and diabetes are two different things,” he said. “No, they are linked together.” It’s actually the main reason Wang came to City of Hope, where research and treatment of both illnesses have a long history of innovative breakthroughs and both departments work together seamlessly. “We have a really unique and close association,” he said.

Michael now receives insulin continuously through a wearable pump. Wang is impressed with how well his patient has adapted. “He’s a smart guy, an intelligent gentleman, and he’s managing it.”

To hear Michael describe it, this is no big deal.

“There was a bit of a learning curve, but now it’s nothing more than a minor inconvenience,” he said.

He praises Wang for his leading-edge knowledge. “He was instrumental in getting me into the first group of patients to try the new Omnipod 5 pump, which sends results to doctors in real time and can predict insulin need based on historical patterns,” he said. And he’s grateful for the way Wang maintains close contact with Michael’s oncologists, making sure everyone is on the same page. “Because it’s a delicate balance,” he continued. “Diabetes can complicate chemo treatment.”

Calling himself “a work in progress,” Michael continues to battle periodic flareups of his cancer. A new tumor appeared in his liver and was treated first with chemotherapy, then with the PARP inhibitor Lynparza, and the tumor disappeared. An additional tumor was detected shortly thereafter, and Michael is currently deciding between radiation, more chemo or surgery to treat it.

Overall, he’s delighted with where he is and how City of Hope got him there. “It’s wonderful to have options, which is what the doctors at City of Hope have given me.”

“My disease may not be curable, but it’s treatable,” he said. “My doctors have transformed a terminal illness into a chronic, treatable one, and Dr. Wang has helped me turn a challenging condition into one that’s easily managed. I anticipate there will be more bumps in the road, and I’ll deal with them.”

“I’ve had the best team, the best care, all the resources and technology available, and the wonderful support from everyone at the clinics and at City of Hope Helford Clinical Research Hospital. It has given me the confidence to see it all through.”