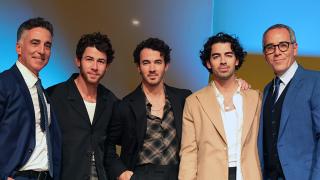 “The generosity of these leaders in the music, film and entertainment industry has helped City of Hope establish a national footprint and deliver its leading-edge research and treatment to more patients, families and communities across the U.S.,” said City of Hope’s CEO Robert Stone, the Helen and Morgan Chu Chief Executive Officer Distinguished Chair. “We are grateful to Monte and Avery Lipman for their leadership and support with advancing our mission and helping bring the treatments of tomorrow to patients who need them today. They join the countless executives and volunteers who have supported City of Hope and its Music, Film and Entertainment Industry group for five decades.”

Fred Northup, the evening’s auctioneer, opened the ceremony, welcoming guests and sharing that “City of Hope is known for its national and international impact, producing therapies that save or improve the lives of over 100 million patients each and every year. This kind of global impact would not be possible without philanthropy and the investment of corporate partners and industry volunteers like everyone in this room.  And so, by being here, you are giving hope — by being here you are [giving] second chances and you are giving the power to heal.”

Then, Jack Johnson performed his hit songs “Open Mind,” “Banana Pancakes” and “Better Together.” Host Porter took to the stage to give a heartfelt speech honoring the fight against cancer, diabetes and HIV/AIDS and gave an inspiring performance of his song “Audacity.” He then introduced a short video featuring Taylor Swift, the Jonas Brothers, and honorees Monte and Avery Lipman.

In talking about City of Hope’s lifesaving impact on the community, President of Universal Music Publishing Group Evan Lamberg said, “City of Hope is continuing its outstanding research, transforming the future of health care and the cures of today and tomorrow. And it continues to be incredible and groundbreaking.”

After sharing a video with guests about City of Hope’s mission, Northup introduced nine City of Hope patients who shared their personal experiences. Leukemia survivor Alex Tung said, “City of Hope helped me get on a clinical trial for a lifesaving cord blood transplant…and I am happy to say that after the transplant, I have been in remission for over eight years now. What City of Hope did for me was nothing short of a miracle.” Breast cancer survivor Maria Flores said, “Because of City of Hope’s dedicated researchers, doctors, nurses…I am here 13 years in remission. Thank you to all of you and City of Hope for being my biggest partners in my battle against breast cancer.”

Near the end of the gala, the Jonas Brothers surprised the audience with performances of “Leave Before You Love Me” and “Sucker.”

Executive Vice President of Universal Music Group Michele Anthony took to the stage to present The Spirit of Life Award to Monte and Avery Lipman. In her speech, Anthony said, “Whether you work at Republic or not, if someone is going through a difficult time or facing an illness, Monte and Avery are there. Countless times I've witnessed their compassion, love and generosity….For all of these reasons, Monte and Avery, you exemplify the Spirit of Life.”

In accepting the award, Avery Lipman said, “It’s not lost on either one of us what it means to be given the privilege and the honor to help City of Hope. And how truly thankful [we are] of the partnership and support we have had along the way to get us here tonight.”

Monte Lipman said, “For Avery and I, being recognized as someone who can help make a difference in the fight against cancer is truly an honor. Most importantly, our true inspiration remains focused on City of Hope’s extraordinary doctors, scientists, caregivers, counselors and, of course, those families in need of our resources, support and kindness.”

Our Most Prestigious Honor

The Spirit of Life Award is City of Hope’s most prestigious honor and is presented to an esteemed community of industry leaders around the world who have made a significant commitment to improving the lives of others through the advancement of research and clinical innovation and the delivery of personalized, compassionate care. Honorees are selected for their notable contributions to the community in which they live and the profession in which they work. Monte and Avery Lipman are continuing a 49-year tradition of robust support and powerful impact from their industry, which collectively has raised more than $125 million for pioneering research that has yielded therapies and treatments that benefit people around the world.

This year’s Spirit of Life campaign, which culminated with last night’s event, raised nearly $4 million in support of City of Hope’s mission to treat and ultimately cure cancer, diabetes and other life-threatening diseases.

For photo highlights of the evening, please go here.