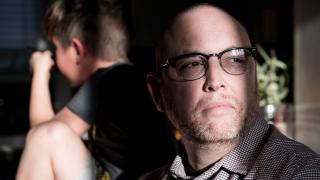 On a recent evening, Ian MacLeod double-clicked an audio file saved on his laptop. The voice that emerged from the recording was ragged and whisper-thin — one he had not heard in years. It was his own.

“Oh my gosh, it’s so hard,” says the voice, thick with emotion, recorded in 2013 as MacLeod lay alone in his hospital room. “I’m discouraged. I know this will pass but it is so hard.”

Several seconds go by as MacLeod breathes into the microphone. The sound feels heavy — as if breath itself could hold weight. He is waiting for news about whether his brother, Adam, is a match for a bone marrow transplant.

As he recorded his struggle, MacLeod was dealing with a new definition of self: 34 years old, marathon runner, husband, father of two — cancer patient. The latter came after MacLeod was diagnosed with acute myeloid leukemia, or AML.

“You can hear the fear,” said MacLeod as he pushed pause on another recording. Listening to the voices of his past, he admits, makes him feel vulnerable. It is, perhaps, a little too real.

“All of a sudden you’re back in it,” he says. “You’re in the room, you can smell the hand soap, you feel the air conditioning. It takes you back.”

MacLeod sits with the emotions he felt then, and feels now.

“All my senses were off,” he muses after a long pause. “My will to live was mute.”

Stuck In This Body And It's Sick

MacLeod was doubled over in pain.

It seemed to happen overnight. One day he was healthy — the next, he had sharp pain in his abdomen. Blood tests performed by his primary care doctor were conclusive. MacLeod had leukemia.

“I remember the first night, sleeping in my bed at home when I was diagnosed, thinking how claustrophobic I was because I'm stuck in this body and it's sick,” he said.

Almost as quickly as cancer had entered his vocabulary, MacLeod was in treatment. He was diagnosed on a Tuesday in July 2013, and admitted to City of Hope that Friday. By the following Monday, he did his first round of chemotherapy.

Because his cancer was aggressive, and because he had two mutations in his DNA that were drivers of that aggression, MacLeod was told he needed a bone marrow transplant. His chances of finding a viable match for the transplant were dim: 25 percent.

His hopes hinged on one person: his brother, Adam.

MacLeod’s family waited for days after Adam’s blood work was completed to get the results. It was a period in which time felt like it was crawling.

“In my mind, we were screwed,” said MacLeod’s wife, Shannon. “I figured there no way we’re going to be a full match. We were going to have a problem.”

The day the results came in, it was a warm, balmy day outside. Yet, when former City of Hope hematologist Alan Skarbnik, M.D., strode into the hospital room, it was as if he was cutting through thick fog. MacLeod and his wife were, as he describes it, “on pins and needles.”

Skarbnik pulled out a large scratch piece of paper and a green Sharpie. He began sketching out genetic code.

The family was elated, filled with hope. But finding a match was only the beginning of the journey. There was darkness lurking around the corner.

The Truth Will Set You Free

MacLeod sits at the edge of a hospital bed, a thin film of paper crinkling beneath him. He is hunched over his smartphone, an earbud dangling out of one ear, while through the other plays a song whose opening lyrics seem particularly apt:

“The truth will set you free
But first, it'll piss you off …”

MacLeod is about to get a bone marrow biopsy - a painful tissue extraction that will reveal, four years since he was diagnosed with leukemia, whether his system is holding cancer at bay. Or whether it's back.

He is in remission, but it will take five years of follow-ups like these before he can breathe easy.

“This will be, I don't know, the eighth or ninth time I've gotten a biopsy,” said MacLeod, 38, his voice thick with the effects of a sedative. “This day always comes with a mixed bag of feelings. It's reflective of the life that I'm living, which is really, really difficult and really, really beautiful.”

Like a pendulum, he has swung from celebrating being alive, to occasionally being gripped by fear and anxiety. And for a time, he suffered with a condition called cancer-related post-traumatic stress. About one out of five cancer patients experience symptoms of post-traumatic stress for months after diagnosis, according to a recent study in the journal Cancer, and some suffer for years.

“When we hear about PTSD, we often think about trauma from a war or from a physical or sexual assault,” said Marinel Olivares, L.C.S.W., the clinical social work lead at City of Hope. “Cancer patients who have gone through a difficult illness or treatment can also experience PTSD.”

It is a second journey for many following of the trauma of diagnosis and treatment — a sense of dread that appears at unexpected times. Remission, it would seem, is the end. Catharsis. But certain reminders can bring patients back, with vivid clarity, to the traumas of cancer.

“I walk around the halls and I see pain," said MacLeod on his way to the bone marrow biopsy.

These halls hold memories — of chemotherapy rounds that drained him, of radiation that seared his skin, of the transplant that nearly killed him.

Thoughts about those radiation treatments sometimes come back unexpectedly — and powerfully. Through other trying moments during treatment — going into a coma, losing his ability to walk and talk, almost dying — MacLeod clung to the idea that he would survive.

It made sense considering who he was before cancer: a person his wife describes as an eternal optimist, someone who saw life through the lens of vibrant colors.

“But after radiation, he went from seeing color to only black and white,” she said. “When he got the radiation, it took something away from him.”

It was side effects of radiation treatment, being sequestered in his hospital room for weeks and seeing his family draped in yellow robes and masks that sent MacLeod to a dark place. He stopped having conversations, he stopped listening to music.

It was side effects of radiation treatment, being sequestered in his hospital room for weeks and seeing his family draped in yellow robes and masks that sent MacLeod to a dark place. He stopped having conversations, he stopped listening to music.

“It was as if he had to go inside himself in order to survive it,” said Shannon. “He was a shell of detachment.”

MacLeod says for the first year following treatment, he could not drive. Being in confined spaces brought back memories of those hospital rooms; and of being enclosed in CT scanners during radiation treatment. Lately, it is the specter of the periodic bone marrow biopsy that can lure MacLeod to a dark emotional space, along with the wait for results.

“With the biopsy, especially at the beginning, it was horrible, because my mental, emotional, spiritual capacities were broken,” said MacLeod. “They were shattered in trauma and PTSD. Even four years later, that still happens.”

“Although most patients do not develop the full syndrome of post-traumatic stress disorder, some may experience it at the time of diagnosis, during procedures, hospitalization or some aspect of treatment,” said Jaroslava Salman, M.D., assistant clinical professor of psychiatry in the Department of Supportive Care Medicine at City of Hope. "This can lead to anxiety, intrusive memories and 'anniversary reactions,' which is heightened anxiety around the anniversary of cancer-related events."

Salman says that for most patients, these symptoms will subside. For others, treatment may be necessary.

The nurse practitioner who will perform MacLeod's bone marrow biopsy walks into the room. Minutes later, as MacLeod lays face down across the exam table, she jabs a hollow needle deep into his hip bone and mines his marrow for a sample. MacLeod feels pain darting along his spine.

Shannon, who is watching from a corner of the room, winces.

“It's horrible,” she says. “It's intense to see someone that you love in pain.”

But the pain is something MacLeod has, over time, come to embrace. It is analogous to the pain of having had cancer.

It took years, but he now accepts that cancer always will be part of his life. Acknowledging his feelings around cancer, rather than trying to avoid them - being in the moment, whether that moment is agonizing or blissful - is how MacLeod has climbed out of the abyss of cancer-related trauma.

MacLeod says a former psychiatrist at City of Hope, Sangeeta Awasthi, M.D., suggested a mindfulness program at UCLA that helped steer him away from thoughts and feelings related to the past; and instead stay in the present.

He continues: “I’m lucky enough to have that hindsight of knowing what it’s like to almost die. I now understand that focusing on the past and the future doesn’t pay you dividends.

“It's almost unfair how much I have to hurt at times, but I wouldn't have it any other way.”

This attitude is now an intrinsic part of MacLeod’s thinking and process — an awareness, an honesty about his life, that developed because of cancer.

Sitting at the edge of the exam table after his biopsy, MacLeod is ebullient. He got through it. He’s still here. He’s alive.

“I'm a walking miracle. I'm not supposed to be here,” he says. “The other miracle is I’m thriving. Not just surviving, but thriving.

“And that delineation is so warm, because I feel like my life is better now than it was before I got cancer. I like this version much better. This one has meaning and purpose.”

"This here ain't a scrimmage
I told you we won't stop …”

The lyrics of the background music playing during MacLeod’s biopsy reflect the spirit of his new journey. And the notion of not stopping, not bending to cancer, echoes the tone of later entries in MacLeod’s audio diary.

“You have to cleave onto the new day. You have to move forward. You have to work and fight,” says one of the recordings. “Everything is within myself to get better. I’m not going to give up.

Two weeks later, MacLeod texted the results of his bone marrow biopsy to a friend: “Perfect, no leukemia, 100% donor.”