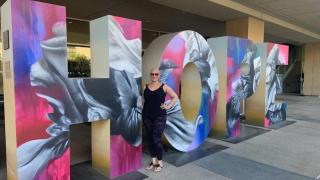 Imelda Moreno Jordan is a strong, energetic woman who can tackle almost any challenge. She’s not only the center of an all-male family — one husband and four boys — she also runs a trucking company. She can even don boxing gloves and deliver a decent punch.

But cancer — that really threw her. At first.

“One day in the shower I felt a marble-size lump in my breast. It was an awful, scary feeling,” she said. “A few days later, I was sleeping on my side, and it hurt so much I woke up crying.”

Her primary care doctor ordered a biopsy — and sent the results in an email.

“I’m not a pathologist. I don’t know how to read a report. So, I transferred what I saw to Google and what came up was scary. Believe me, Google is not your friend.”

When she finally saw her doctor, she learned that she had breast cancer.

“I watched my father fight pancreatic cancer for nine months before he died, and I shared my fears with the doctor. But she just told me all my concerns were in my head,” she said. “I felt violated and unheard.”

The doctor said she’d send her to an oncologist, but Jordan didn’t wait for the referral.

She’d heard good things about City of Hope, so she called and made an appointment, Soon after, she learned that her doctor had also referred her there, which made her even more confident in her decision.

At her initial visit to City of Hope | Pasadena, she learned her cancer was Stage 2, and she underwent further testing, which provided more specific information about her tumor. It was a triple-negative invasive ductal carcinoma, a fast-growing, aggressive malignancy that, unlike many breast cancers, is not fueled by estrogen, progesterone or HER2. In addition, genomic analysis revealed that she had the BRCA1 mutation.

Jordan, who lives just minutes away from City of Hope in Corona, was referred to the center there, where she consulted with oncologist Yulian Khagi, M.D.

“I was so anxious, the first thing I asked him was, ‘Am I curable? Am I going to die?’” she recalled. “He looked at me and he said, ‘Imelda, you’re curable. We’re in an early stage. You’re going to be fine.’”

Finally, she felt like she was being cared for.

“I’d come from a bad experience with my primary care doctor. So, when you go from that to City of Hope, wow. There was professionalism and compassion, and I knew I was in good hands,” Jordan said.

BRCA is an inherited mutation that can cause cancer, and learning she was BRCA1-positive had a significant impact on Jordan’s treatment choices and on her family.

Although her father had never been tested, she knew it might explain why he, as well as two of her aunts, had had cancer.

“I sent a text to all my relatives to tell them this ran in our family and that it’s important to be aware that you may carry these genes,” she said.

They understood and got tested. The results were not surprising. One of her sisters and several cousins found out they had a BRCA mutation — important information because it can help prevent cancer or catch it in the earliest stages.

If you are BRCA positive, you can learn what to do about it in this breast cancer guide provided by the Centers for Disease Control and Prevention. And the Pancreatic Society Action Network offers excellent information about BRCA and pancreatic cancer.

Jordan would need surgery, but first, chemotherapy. She knew it could be rough, so like the champ she is, she prepared for this opponent.

“I knew I had to take myself to a place where I was mentally strong,” she said. “So, I got ready to fight like a boxer. I was like, let’s go.”

The first chemo treatment, 12 rounds of Taxol, wasn’t much worse than a bad hangover where every joint hurt. But she ate like a champ — lots of beets and liver — and even gained weight. Then her hair started falling out.

“It was hard because I am your saucy girl. I love my hair and I was always changing it, with extensions, with clip-ons,” she said. “But I decided to shave my head and asked my stylist, who’s also my cousin, to do it.”

When her cousin finished the job, she shaved her own head — and after that her sons, nephews, other cousins, even her mother all shaved their heads in solidarity. It gave Jordan a wonderful feeling of being supported.

Then came the whammy — a combination of Adriamycin and Cytoxan known as the Red Devil. Red for its color, devil because it can be a hellish experience.

“It knocked me down. I would look in the mirror and I didn’t recognize Imelda anymore. I felt like I was in mourning for myself,” she said. “And at that point, I surrendered to God. I felt he was with me and guiding me through this.”

She fought her way through the Red Devil experience — but the journey wasn’t quite over yet.

“An aunt with breast cancer had only one breast removed, and the cancer came back,” Jordan said. “So being triple-negative, BRCA positive, I knew from the start that I wanted a double mastectomy.”

She met with surgical oncologist Amy Polverini, M.D., who told her she was a good candidate for skin-sparing reconstruction. In this technique, which preserves as much breast skin as possible, the breast tissue is removed, leaving enough skin to create a new breast over an implant. In Jordan’s case, they were also able to spare the areola and nipple.

Both procedures would be done the same day and in the same operating room at City of Hope’s main campus in Duarte. Polverni first performed the mastectomy, then plastic surgeon Wai-Yee Li, M.D., Ph.D., did the reconstruction.

“It was an eight-hour surgery,” Jordan said. “And I just saw a video my husband took of me that day walking around the nursing unit afterwards. I was pretty amazed at that.”

That was in November 2021. In February, because BRCA has also been associated with ovarian cancer, Jordan chose to have a preventive complete hysterectomy to remove her ovaries, uterus and fallopian tubes, which was performed by City of Hope oncologist Mehdi M. Kebria, M.D., at City of Hope | Corona.

Jordan is now cancer free and goes for a follow-up visit every month with her current physician, oncologist/hematologist Gregory Gilmore, D.O., also at City of Hope | Corona. She also takes a PARP inhibitor, a drug to repair DNA and help prevent BRCA-positive cancer from recurring.

She wants to share what she learned to help others through their cancer journey.

“It will be hard, but you have to trust the process, trust your team and know you’re going to be fine,” she said. “I had so much support from my City of Hope team and was so uplifted by them that they gave me hope.”

She also feels that the journey changed the way she experiences life.

“You’ve been through a war, and it teaches you that you’re stronger than you know,” she said. “You’ve got a second chance at life, and I see everything with more joy now.”