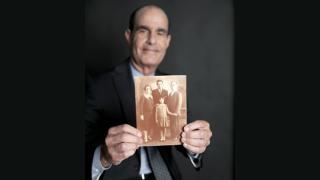 Irvine Philanthropist Shares Family Legacy Rooted in City of Hope
Donor Story
In recognition of National Philanthropy Day on Nov. 15, meet Jay Steinman. His family has had a lifelong connection to City of Hope. He is one of the nearly 10,000 community crusaders whose support is helping to bring our Orange County vision to life.

When Los Angeles native and Irvine resident Jay Steinman recalls his family’s lifelong connection to City of Hope, he always takes a moment to appreciate its name – and specifically, how it honors the kind of compassionate care it has provided for more than 100 years.

“It’s not just a name. It’s a place where hope lives,” said Jay, 70, whose Eastern European grandparents emigrated to Los Angeles in 1910 and were closely involved with the Jewish Consumptive Relief Association, which supported patients with tuberculosis. In 1916, the Association created the Los Angeles Sanatorium which would eventually be renamed the City of Hope.

“When the facility opened, there was no cure for tuberculosis, so the primary tools they had for helping people were compassion and hope,” Jay explained. “From early on, caregivers, patients and their families called the facility the ‘City of Hope.’ That is so meaningful, because the name was not selected by a board of directors or marketing group; it was a description of the experience people had there. They experienced it as a city of hope. The name was not officially changed to ‘City of Hope’ until after World War II. That’s what I always think of when I think about City of Hope.”

From the early days when it consisted of just a few tents, to pictures of his grandmother at a groundbreaking ceremony for one of its first buildings, Jay cherishes his family’s deep roots with City of Hope, which continue to this day.

A Sad Twist of Fate
But the connection wasn’t always a joyous one. In a sad twist of fate, Jay’s mother contracted tuberculosis in 1953 at the age of 32. Jay was only three years old when she became an inpatient at City of Hope, where she remained for the next two years.

It is a time Jay remembers vividly.

“I saw her once a week because the doctors were worried about the transmission of the disease to me,” Jay recalled. “I had to talk to her through a screen; I wrote, drew pictures and gave them to her through the screen. But she couldn’t touch, hug me or kiss me. How difficult for a mother to be in that position with her child – I can’t even imagine.”

His mother left City of Hope in 1955 after surgery to remove part of her right lung, which eventually led to a full recovery. Grateful for her life, Jay’s mother carried on the tradition begun by her parents, continuing to support City of Hope in various ways for the remainder of her life.

“City of Hope has always been a family affair,” Jay reflected. “For a long time, Mom was a volunteer at COH; I remember her coming into the house wearing pink jumper, a white shirt and her City of Hope name tag. My mother was 32 when she went into City of Hope, and she died when she was 97, so City of Hope gave me another 65 years with my mother.

“How do you repay that? How do you say thank you for that?”

Bringing Hope to OC
As City of Hope moves forward with its expansion plans into Orange County, Jay said the obvious benefit is more access to cutting-edge treatments and research opportunities at a world-renowned cancer specialty hospital that is closer to him and his neighbors.

“The quality of medical care for cancer patients in Orange County will increase dramatically,” he said. “That’s a huge deal for the county and the people who live here.”

But City of Hope offers much more than that.

“One of the most significant challenges we have in our lifetime is finding a cure for cancer,” Jay says. “But there are many people involved in that search. What sets City of Hope apart is the personal connection it has with its patients and their families, the compassion it offers and hope it creates.

“I have this picture in my head of City of Hope. You come in and you’re greeted by someone,” he said. “They might hand you off to someone else – but somebody is always with you. It’s as if someone is always holding your hand along the way. You’re never left alone. You always feel held.”

Back to Our Donor Stories