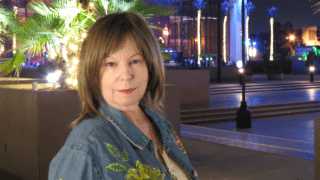 Suzanne Eassom is taking on metastatic breast cancer with the resolve of a long-distance runner.

She was always focused on other races prior to her own diagnosis, whether it was enjoying watching the Formula One Grand Prix Championship, or the City of Hope Mile Stakes race in person at Santa Anita Park or running 5K races on the weekends with her husband, Dick.

But in 2018, she had some pain in her chest and shoulder, which at first she attributed to an injury. When she experienced swelling and other symptoms, she went to see her primary care physician. Eassom was soon diagnosed with metastatic (Stage 4) breast cancer, with multiple triple-positive tumors in her right breast that had already spread to other areas of the body.

Eassom knew it was vital for her to understand exactly what she was facing. “Cancer is complex, and it’s an enormous learning curve when you’ve just received a diagnosis as life-changing as Stage 4 breast cancer,” she said.

She met with a breast surgeon, who said she needed adjuvant chemotherapy to shrink her tumors prior to considering surgery and recommended she speak with Wade Smith, M.D., a medical oncologist specializing in breast cancer at City of Hope | Newport Beach Fashion Island, one of five City of Hope locations in Orange County. “It gave me peace of mind to know I did not have to travel far from home for advanced care,” said Eassom, a Tustin, California, resident.

Smith and the City of Hope breast cancer team offered Eassom the answers — and reassurance — she needed. “Dr. Smith is so attuned to his patients,” Eassom said. “If I have a symptom to tell Dr. Smith about, I’m not always great at describing it clearly at first, but he can immediately discern from his experience and expertise what may be happening physically and determine precisely what response is needed for my care.”

Another reason for Eassom’s confidence, she said, is that City of Hope focuses solely on cancer — a disease that occurs in 1 in 3 people in the U.S. during their lifetime.

“City of Hope has the best of everything I could possibly need in terms of expertise, treatments and care,” Eassom said. “On top of that, I’m seen and valued as a whole individual, not ‘just’ a patient with a particular cancer. They make me feel like family. I can feel like myself. I can show off my antique jewelry while undergoing chemotherapy. I couldn’t feel more cared about and supported by my entire City of Hope team.”

Prevention and early detection are key

Eassom urges women to be vigilant in screening for breast cancer, including regular self-exams and mammograms. The disease impacts approximately 1 in 8 women in the U.S. and 1 in 7 in Orange County, a higher rate of breast cancer than other California counties.

“You don’t have to have a history of breast cancer to be at risk. No one in my family had breast cancer that I’m aware of, and I don’t have a genetic mutation like BRCA1 or BRCA2,” she said. “Screening is an essential part of breast cancer prevention and early detection. If you haven’t had a mammogram, they’re a lot easier to get than you may think.”

“Dr. Dang understands what’s important to me and why, both in terms of addressing the cancer and achieving my own long-term, quality-of-life goals,” Eassom said. “Dr. Dang and Dr. Smith worked tirelessly to get me to the point where surgery could take place.”

Eassom continues to receive advanced care at City of Hope while recovering from surgery and planning for reconstruction and the next phases of treatment.

“Receiving treatment for metastatic cancer is almost like being put back at the start line. Even if I have clear diagnostic scans, my team will continue surveillance,” Eassom said. “That’s so important, because if something is detected on a scan, it’s more likely to be caught and diagnosed at an earlier stage, and it’s going to be addressed.”

“I’m looking forward to having many more moments with the people I love and who love me,” Eassom said. “My steps forward would not have been possible anywhere except at City of Hope Orange County. It’s impossible for me to overstate that. Now, I can focus on living my life to its fullest, and it’s off to the real races again.”