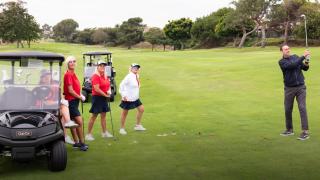 By
City Of Hope Orange County
Orange County
After facing the challenges of treatment for multiple myeloma, Jeff Fitzhugh says he doesn’t sweat the small stuff anymore. His big-picture focus is on giving back, whether it’s counseling other people with cancer or raising money to help people impacted by war.
“I look for the silver linings of cancer,” the Huntington Beach father and businessman said. “I’m a better man now, with a different perspective that I may not have otherwise gained.”
Fitzhugh, CEO of golf lifestyle brand Linksoul, together with co-founders Geoff Cunningham and John Ashworth, have organized a fundraising drive benefiting people in Ukraine. Linksoul designed a custom T-shirt in the colors of the Ukrainian flag that features the brand's slogan “Make Par / Not War.”
All drive proceeds go to Sunflower of Peace, a nonprofit organization providing humanitarian and medical support in Ukraine. With Linksoul meeting its original fundraising target of $10,000 in less than 24 hours, it has set its new goal to $100,000, and Fitzhugh hopes the bar will be raised even higher.

Fitzhugh’s fundraising initiative follows on the heels of the Quest for a Cure Charity Golf Tournament, which he organized in September 2021. The event netted almost $100,000 to fund groundbreaking multiple myeloma research at City of Hope Orange County.
Among the attendees were Edward S. Kim, M.D., M.B.A., Physician-in-Chief of City of Hope Orange County, Amrita Krishnan, M.D., Fitzhugh’s medical oncologist at City of Hope Newport Beach Fashion Island and director of the Judy and Bernard Briskin Center for Multiple Myeloma Research, and several of Fitzhugh’s fellow “MM Squad” members, City of Hope multiple myeloma patients who met at the Newport Beach Fashion Island location and have become exceptionally close.
For Fitzhugh, helping others isn’t limited to big charity events. He prizes opportunities to talk with others who need support and encouragement in their cancer battles.
“I’ve had several people reach out to me who have been recently diagnosed, asking what they can expect,” he said. “I give them information, but I also try to lift their spirits and give them a better frame of mind. It’s the most rewarding thing I’ve ever done. I really believe it’s a calling for me now.”
Visit Linksoul to learn more about the Sunflower of Peace fundraising campaign.
To make an appointment at any of City of Hope’s four Orange County locations, click here or call: