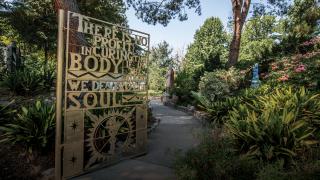 By
City of Hope
Insights
Physician News
Breast cancer cells
The Breast Cancer Program at City of Hope is internationally lauded for advancing the field of breast cancer and is providing superior outcomes in breast cancer survival compared to the national average. As a National Cancer Institute-designated comprehensive cancer center, we deliver leading-edge treatments through groundbreaking evidence-based research, on-site clinical trials, and comprehensive and personalized care for each patient. We are experts at treating advanced and recurrent disease, and we believe that the best patient care comes from collaboration.
The multidisciplinary teams that lead the treatment of each patient with breast cancer at City of Hope are able to deliver complex, subspecialized care because of their individual expertise. While surgery is often only one part of treatment, we lead the way in innovative and thoughtful surgical approaches to treating breast cancer and strive to take a minimally invasive approach to reduce discomfort, hasten recovery time and allow for patients to proceed with postsurgical treatments sooner.
This world-class, multidisciplinary approach has led to our survival for breast cancer exceeding the SEER National average at all stages.*
*Data were derived from City of Hope cancer registry (CNeXT) and SEER November 2019 Research Data Files as the comparator. All City of Hope patients were diagnosed from 2007 through 2016, and the City of Hope follow-up cutoff date was 12/31/2017, to align with SEER data. Survival time was based on first occurring BCA diagnosis during the time period of interest.

The adjusted survival probabilities for City of Hope female breast cancer patients across all Stages (I, II, III and IV) were compared to the SEER† National data three, five and 10 years after diagnosis. The percent difference after 10 years was ≥5% at all stages of cancer, with the largest differences seen in Stage IV patients regardless of year (3 yr: 21%; 5 yr: 31%; 10 yr: 50%).
You can find more information in our full Breast Outcome Report .

An authoritative source on cancer incidence and survival, the SEER Program provides cancer statistics to reduce the cancer burden among the U.S. population. It is supported by the Surveillance Research Program, which provides national leadership in cancer surveillance using analytical tools and methodological expertise in collecting, analyzing, interpreting and disseminating reliable population-based statistics.