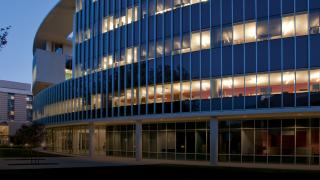 By conducting multiple retrospective genomic analysis studies, a research team led by Ajay Goel, Ph.D., M.S., founding chair of the Department of Molecular Diagnostics and Experimental Therapeutics and founding director of Biotech Innovations at Beckman Research Institute of City of Hope, was able to identify distinctive biomarker signatures associated with higher-risk cases of pancreatic ductal adenocarcinoma (PDAC), the most common type of pancreatic cancer.
Faced with the universal limits of current imaging technology and the lack of screening tests, oncologists who treat pancreatic cancer are hampered in their ability to provide accurate prognoses, effective treatment and tailored care. In many instances, the first indication that cancer has metastasized occurs during surgical operations to excise a localized tumor.
Pancreatic cancers are notoriously difficult to treat, and the scarcity of diagnostic tools undoubtedly contributes to poor treatment outcomes. Having the ability to identify high-risk cases would allow clinicians to optimize cancer management and patient outcomes, and due to recent discoveries by City of Hope researchers this type of testing is now possible.

The tumor microenvironment (TME) of PDAC plays a role in conferring resistance to treatments like chemotherapy and can drive cancer progression and severity. By honing in on three main TME components — stromal genes, immune signatures and proliferation genes — Goel was able to identify a 15-gene signature of the TME associated with poor overall survival. Initial findings were validated in a number of datasets as well as independent validation in a clinical cohort of PDAC patients.
These findings have led to the development of a clinically translatable risk-stratification assay and nomogram to be used as a predictive tool that can help oncologists select appropriate therapies for different subsets of patients.

In two separate research projects, the Goel team turned to microRNA (miRNA) signatures to discern the level of risk to patients. The small noncoding segments of RNA regulate gene expression and have different expression profiles associated with different stages of disease or subtypes of cancer. Since they are stable in body fluids and tissues, they represent a unique class of biomarker that can be used to develop noninvasive diagnostic tests.
In the first study, the team was able to identify a novel panel of nine miRNAs that were significantly upregulated or downregulated in PDAC subtypes with poor survival. Using this signature, they were able to develop a risk stratification model that can predict survival probability in tissue samples and have translated these findings for use in a liquid-based assay in preoperative serum.
“Having a molecular marker that can be measured in blood prior to any treatment would probably help us stratify these patients much more effectively. No one has ever looked for micro-RNA biomarkers in blood before; we are the first to attempt it,” said Goel. A noninvasive test could enable disease monitoring and eliminate the need for tissue-based biopsies, and additional work is currently underway to fully validate the noninvasive test for clinical application.
During the second miRNA study, the investigators set out to identify a miRNA expression panel associated with metastasis to lymph nodes from previously collected PDAC tissue specimens. Foreknowledge of metastases could change the course of a patient’s treatment. According to Goel, “if we know beforehand that these pancreatic cancer patients have lymph node metastases, we probably would not perform surgery because it’s complicated, expensive and, most importantly, patients with lymph node spread don’t do well after surgery.”
The comprehensive analysis of miRNA expression profile data sets from patients with pancreatic tumors and tissue specimens from PDAC patients with and without metastases allowed the team to identify and establish a robust miRNA signature of six miRNAs consistently expressed in patients with metastatic PDAC with a high level of accuracy. The group has plans to move these novel findings beyond data set and biopsy analyses to the first blood draw test for pancreatic cancer patients, which would be a giant leap forward in the field of pancreatic research.
To refer a patient to City of Hope, please contact 800-826-4673.