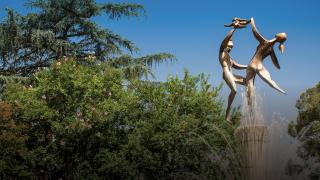 By
City of Hope
Clinical Trials
Physician News
Sarcoma is a general term for a group of uncommon cancers that occur in the bones, fat and muscle. Because sarcomas are rare and span so many different types of tissue, they require specialized detection and treatment. Some types of sarcomas, such as leiomyosarcoma or other soft tissue sarcomas, are unresectable and thus require pharmacological interventions.
Mark Agulnik, M.D., the the section chief of Sarcoma Medical Oncology, is leading a collaborative team of researchers at City of Hope and several other institutions in a Phase 2 trial to assess cabozantinib and temozolomide used for treatment of unresectable or metastatic sarcomas.

The primary objective of the study is to assess if giving both cabozantinib and temozolomide are more effective than either one alone in treating patients with leiomyosarcoma or other soft tissue sarcomas by measuring the progression-free survival after 12 weeks in patients receiving both drugs. Cabozantinib may stop the growth of tumor cells by blocking some of the enzymes needed for cell growth. Drugs used in chemotherapy, such as temozolomide, work in different ways to stop the growth of tumor cells, either by killing the cells, by stopping them from dividing or by stopping them from spreading. Cabozantinib is still an investigational drug, meaning that it has not been approved by the United States Food and Drug Administration or any other regulatory agencies for sale or use by the public for the indication under investigation in this study.
Patients will receive cabozantinib orally once daily on days 1-28 and temozolomide orally once daily on days 1-5. Every 28 days, patients will repeat this cycle in the absence of disease progression or unacceptable toxicity. After completion of study treatment, patients with progressive disease will be followed up every six months for up to two years. Patients without progressive disease will be followed up every six months for up to five years.
Throughout the clinical trial, the team will also evaluate the response rate and clinical benefit to this novel treatment regimen, along with reported quality of life outcomes, and safety and tolerability. Researchers hope this first-in-human clinical trial will open the door for safe and effective treatment of unresectable or metastatic sarcoma.
To enroll a patient in a clinical trial, visit CityofHope.org/clinicaltrials or call 626-218-1133.