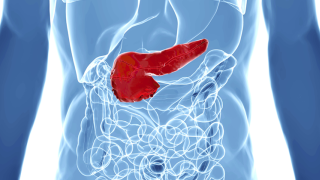 By
Steve Yozwiak
Clinical Trials and Studies
Research News
A pancreatic cancer cell
Adding a drug that targets a molecular vulnerability in pancreatic cancer could provide substantial benefit to patients, according to a clinical trial by the HonorHealth Research Institute and the Translational Genomics Research Institute (TGen), an affiliate of City of Hope, in conjunction with the Pancreatic Cancer Research Team and Cancer Research And Biostatistics.
Published Oct. 3 in the Journal of the American Medical Association (JAMA) Oncology, researchers found that among a clinical trial of 25 patients, adding the drug cisplatin to a current standard-of-care drug regimen resulted in substantial tumor shrinkage for 71% of those patients, and dramatically increased survival beyond one year.
“By adding the drug cisplatin to the current standard of care — nab-paclitaxel plus gemcitabine — we demonstrated substantial clinical activity. The results of this triple-drug regimen are very encouraging for these patients,” said Daniel D. Von Hoff, M.D., who is physician-in-chief, distinguished professor and director of TGen’s Molecular Medicine Division, chief scientific officer at HonorHealth Research Institute and founder of the Pancreatic Cancer Research Team. He also is leader of the Stand Up To Cancer (SU2C)-Cancer Research UK (CRUK)-Lustgarten Foundation Pancreatic Cancer Dream Team.

One year after entering the trial, 16 patients (64%) were still alive, far greater than the average one-year survival, which is only 26% for advanced pancreatic cancer patients. Ten patients (40%) were alive after two years, a survival rate not previously seen for patients with Stage 4 pancreatic cancer, said Von Hoff, the study’s senior author.
“In addition to a high overall response rate, this three-drug combination was well tolerated, with manageable side effects,” said Gayle Jameson, N.P., the principal investigator in this clinical trial and one of the study’s co-lead authors.
The most significant side effects were lowered platelets, which help blood clot; lower levels of red blood cells, which carry oxygen throughout the body; and fewer neutrophils, the most common type of white blood cells, which serve as the immune system’s primary defense against bacterial and viral infections.
Nearly two-thirds of patients in the clinical trial completed at least three 21-day, full-dose therapy cycles, Jameson said. Toxicity levels were minimized by using a relatively low dose of cisplatin and providing patients with aggressive intravenous hydration.
The combination of nab-paclitaxel and gemcitabine — pioneered by a 2009 SU2C Pancreatic Cancer Dream Team, also supported by the Lustgarten Foundation and led by Von Hoff — was approved by the Food and Drug Administration in 2013. Extensive testing led by HonorHealth and TGen demonstrated that the combination enabled longer survival for patients with advanced pancreatic cancer.

“Many pancreatic tumors possess DNA repair deficiencies and are potentially vulnerable to new targeted therapies. We hypothesized that the addition of a platinum, in this case cisplatin, could improve treatment efficacy and patient outcomes,” said Erkut Borazanci, M.D., a clinical oncology investigator at HonorHealth Research Institute and clinical associate professor at TGen. Borazanci also is a co-lead author of the paper and an investigator on the SU2C-CRUK-Lustgarten Dream Team.
In laboratory conditions, TGen researchers had discovered that cisplatin inhibited the ability of pancreatic cancer cells to repair their DNA, causing them to self-destruct.
Because some patients showed substantial improvement in the first three weeks of this clinical trial, this three-drug combination — dubbed the “TGen Triple” or “Triplet regimen” — is being considered for early management of pancreatic cancer patients, and also as a presurgical treatment, according to the study.
“Considering the rapid disease response, acceptable safety profile and encouraging anti-tumor activity, further study of this triple-drug combination and additional tumor molecular analysis is needed to correlate these molecular findings with patient response to treatment,” Von Hoff said.
Gerard Evan, Ph.D., of Cambridge University, co-leader of the SU2C-CRUK-Lustgarten Dream Team, said, “Pancreatic cancer remains one of the hardest cancers to treat, and too many people lose their lives to the disease each year. But these promising early results suggest that combining the common cancer drug cisplatin with standard treatments can significantly boost survival.
“We’re now building on this work and investigating how to navigate the seemingly impenetrable structure of pancreatic tumors, which have a poor blood supply and reside in a dense web of tangled connective tissue that protects them from drugs. We’re now developing new treatments designed to open up the tumors' blood supply, making it easier for our drugs to reach every pancreatic cancer cell.”
This treatment is being further studied by the HonorHealth Research Institute. The clinical trial is available to patients with untreated advanced pancreatic cancer. For more information, please go to HonorHealth.com/research or call 480-323-1339.
The team is studying this treatment in combination with the addition of super-enhancer modifying drugs such as entinostat, minnelide, high-dose pharmaceutical vitamin C, ketogenic diet and AXL inhibitors.