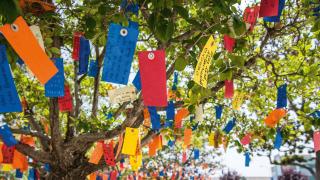 City of Hope is blazing trails in research for the rarest types of sarcoma, as well as the most leading-edge surgical techniques

When you ask Mark Agulnik, M.D., which of the many clinical trials he oversees at City of Hope excite him the most, he answers diplomatically, like a typical parent:

“All my kids are wonderful!”

But he’s not kidding.

Agulnik is City of Hope’s section chief of Sarcoma Medical Oncology in the Department of Medical Oncology & Therapeutics Research. He works with patients afflicted with an exceedingly rare cancer that can show up anywhere, take many different forms, is maddeningly difficult to treat and recurs with frustrating frequency.

Sarcomas differ from more common tumors, or carcinomas, in their internal structure and also where they live. A carcinoma typically appears in epithelial cells — on an organ’s outer layers, such as on the lung, the kidney, the stomach, the colon, etc. Sarcomas take up residence inside bones or the body’s connective tissues, including fat, muscle, nerves and blood vessels.

A little over 17,000 people are diagnosed with sarcoma each year in the U.S. (compared to more than 235,000 diagnosed with lung cancer and 290,000 with breast cancer.) Most cases are so-called “soft tissue” sarcomas, and they occur most often in people over 40. Bone, or osteosarcoma, strikes nearly 4,000 people, many of them children, teens and young adults.

Surgery is considered the gold standard for treating many sarcomas; radiation and drug therapies also play a role. But with so many different varieties of sarcoma out there — as many as 70 different subtypes — as yet there’s no “magic bullet” drug or combination of drugs capable of arresting and eliminating sarcoma across the board.

Which brings us to Agulnik’s “kids.”

No fewer than 20 active clinical trials are underway right now at City of Hope in search of better drug therapies for sarcoma. Agulnik is proud of every one of them — but for different reasons. Of this group, there are trials available for the most common sarcoma subtypes, including leiomyosarcomas, undifferentiated pleomorphic sarcomas and liposarcomas. Uniquely, though, City of Hope currently has a number of novel clinical trials for rare sarcomas such as synovial sarcomas, clear cell sarcoma, angiosarcomas, chondrosarcomas, gastrointestinal stromal tumors (or GIST), Ewing sarcomas, alveolar soft part sarcomas, desmoids and tenosynovial giant cell tumors, to name a few.

“Phase 3 drugs are the ones most likely to reach the market,” he explained, “and I’m excited to be part of that.

“Our Phase 1 trials also excite me, especially because City of Hope is the first site to test three recent drugs in our sarcoma patients. It’s exciting to be able to provide such novel treatments to our patients. At the American Society of Clinical Oncology meeting in June 2022, we presented the work done in a Phase 1 trial for clear cell sarcoma. Two of our current early-phase clinical trials are looking at combination therapies in untreated soft tissue sarcomas, with a novel treatment combination.

“Even Phase 2 trials are exciting, because these drugs can often make an impact by getting listed in the NCCN [National Comprehensive Cancer Network] guidelines, which increases awareness of the drug,” enabling more physicians to make use of them. (Recently, regorafenib was included in the NCCN guidelines for patient with angiosarcomas, based on a study conducted by Agulnik and his colleagues.)

Deciding which drug should be employed against which form of sarcoma depends on the data, especially in the case of targeted therapies, which seek out and derail a tumor’s molecular drivers. Some sarcomas may be susceptible to tyrosine kinase inhibitors or “gamma secretase inhibitors” — each designed to block a particular cellular function. Some targeted drugs may work only on very rare, specific forms of sarcoma. Others have been found to be effective in all soft tissue sarcomas — except one. This is both the frustration and the promise of such novel treatments. To date, the Food and Drug Administration has approved only one targeted therapy for sarcoma.

At least so far, the news is less promising for immunotherapy drugs, which train the body’s immune system to fight the cancer. Though some immunotherapy drugs have reached the market for other cancers (there are two FDA-approved CAR T cell treatments for blood cancers), none have yet been approved for sarcoma, though a few have been recommended. Agulnik remains optimistic. “I feel we have a greater understanding and appreciation now of when to use immunotherapy,” he said. “I’m excited and look forward to finding a clearer role for it, possibly in the next decade.”

When it comes to sarcoma, amputation used to be the standard surgical response. More and more, though, surgeons are developing ways to remove the tumor while sparing the limb. This, however, creates its own set of challenges, especially when large bone gaps result. How to replace most of an arm bone? What can be done to restore balance and equilibrium when a large part of the leg bone must come out? Can joints be saved, or will the patient lose critical function?

“There have been significant surgical advances over the last five, six, seven years,” he said. “We also have better techniques now for saving limbs.”

Technology is playing a role in some of these advances.

As with other cancers, surgeons are making greater use of latest-generation imaging systems to guide them during procedures. Robotic technology is helping to make more precisely pinpointed excisions. Computer navigation can also be used to help ensure the cancer is fully removed.

Even 3D printing is making a contribution, in several ways: Some surgeons will create a 3D model of the tumor and surrounding bone to aid in visualizing and planning the removal procedure. A customized 3D “jig” can be created, which surgeons can then follow during the actual procedure. 3D technology even makes it possible to fabricate custom implants to replace what’s been removed.

Zuckerman, an associate clinical professor in the Division of Orthopaedic Surgery, is most excited about the pioneering work he’s developed using magnetic devices that can help large sections of donated bone heal, or to grow new bone.

When bone has to be removed due to cancer and the gap needs to be filled, surgeons can sometimes use a donated bone graft. To hold everything together, there needs to be a lot of compression between the person’s bone and the donated bone, which is usually accomplished with plates and screws. Magnetic nail systems do a better job compressing the bones together. Zuckerman says limbs repaired with these rods do a better job bearing and sharing loads, compared to using plates, and very large gaps can be filled. This not only allows the donated bone to adhere more quickly, but also prevents the patient’s bone and the donated bone from becoming weaker over time, which more commonly happens with plates.

Zuckerman has also used these magnetic devices to gradually lengthen a patient’s bone to fill the gap left by tumor surgery. “We can both recreate the patient’s own bone to fill the defect instead of replacing it with metal or donated bone, and ‘grow’ the bone to make their arms or legs the same length,” he said.

Although he is a surgeon, Zuckerman would like nothing better than to see the day when the current crop of experimental drug treatments bears fruit. “Ideally, I’m either out of a job, or the combination of medication and surgery can cure all our patients.”