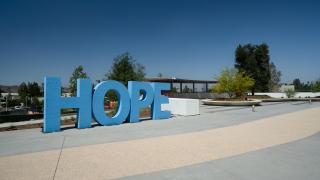 By
Abe Rosenberg
Research
Patient Care
Lung Cancer
In an effort to make lung cancer screening easier and available to as many people as possible, Dan Raz., M.D., has initiated a clinical trial to administer a “liquid biopsy” to at-risk patients in their own homes

“We have a major problem here in the U.S.,” said thoracic surgeon Dan J. Raz, M.D., M.A.S. “Lung cancer screening is recommended for millions of people considered at risk, but very few actually get screened — maybe 5%.”

Lung cancer is the No. 1 cancer killer in the U.S., claiming more than 150,000 victims each year. But if it’s caught early, survival rates can top 90%. Wait too long, and that number drops dramatically.

The key is early detection. A low-dose computed tomography scan (LDCT) can spot a malignancy at its the earliest beginnings, when it can be successfully treated.

Seven million Americans between the ages of 50 and 80 who currently smoke or used to are considered high risk for the disease. If only a slightly larger percentage of them would come in for a scan, thousands of lives could be saved.

Sounds like a no-brainer. After all, people who worry about other cancers have gotten the message: The screening rate for breast cancer is 50%, prostate 35% and colorectal cancer 63%.

But lung cancer screening lags far behind. Why?

“It’s one of the top barriers,” said Raz, explaining that some people are afraid of being judged because of their smoking habit. Rather than subject themselves to the perceived disapproval of doctors and screening staff, they just stay home.

Others may feel uncomfortable inside the CT machine. Some studies show that CT and other scanning devices can trigger feelings of claustrophobia.

For others, simply finding a screening site can be a problem.

“They’re not aware that the service is available,” explained Jonjon Macalintal, a nurse practitioner who works with lung cancer patients, “because their provider didn’t have the information to tell them.”

Still others who live in remote areas don’t want to travel long distances and spend excessive time away from their daily lives.

For years now, Raz, co-director of City of Hope’s Lung Cancer and Thoracic Oncology Program, has been on a professional, as well as personal, crusade to help patients overcome those barriers. Having witnessed the effects of cancer many times in his own family — he’s lost at least five close relatives to the disease — Raz has initiated numerous programs aimed at making lung cancer screening easier and available to as many people as possible.

His latest effort may be his most ambitious yet: a trial to administer a so-called “liquid biopsy” test to at-risk patients — in their own homes.

A liquid biopsy is an ultra-sophisticated blood test that can spot floating cancer cells or altered DNA, indicating the presence of cancer. It has been used for nearly a decade to help monitor advanced cancers and identify mutations that could point to appropriate targeted therapies. However, a liquid biopsy is less reliable than LDCT and not yet Food and Drug Administration-approved for early detection of lung cancer. Nevertheless, Raz points out that the technology is improving every day, and the convenience for patients should be a major selling point.

In this new study, Raz aims to reach out to 100 high-risk people from the San Gabriel Valley, Orange County (Newport Beach) and Antelope Valley. After screening them for eligibility, and explaining that LDCT is the standard of care, the patients will be offered a choice: either LDCT at a testing facility or a liquid biopsy at home. Those who choose the LDCT will be the “control” group.

If a patient opts for the liquid biopsy, a phlebotomist (a specially trained technician who draws blood) will be dispatched to the person’s home to collect the sample and return it to the testing facility for analysis. Once the findings are known, especially if there’s a positive result, the patient will be strongly encouraged to follow up with an LDCT. The point is to see if the availability of an at-home option has an effect on patients’ overall attitudes toward screening.

“We’ll always encourage the use of the LDCT,” emphasized Raz. “But we’re trying to follow the so-called Cologuard model” for colon cancer, where patients first do an at-home test, followed by the more invasive screening done at a testing facility if there is a positive result.

“This is a first step. We want to see how appealing this is to people,” he continued. “We want to understand what kind of people will be interested in testing at home — people in rural or underserved areas, for example. And we want to learn how the results of those at-home tests affect patients’ desire to come in and get screened” with an LDCT.

To find those 100 patients, Raz and his team plan to deploy every tool available, from social media to community health fairs to spreading the word to primary care providers — even using the electronic health records system to make local doctors aware that some of their patients may be eligible.

This is not the first time Raz has subjected the liquid biopsy concept to a clinical trial. Simultaneously, he is running a study that combines liquid biopsy with genetic screening and whole-body magnetic resonance imaging to try to catch cancer early in patients with a strong family history of the disease.

But in creating a standalone trial for liquid biopsies done at home, Raz believes he is following a growing and inevitable trend.

“People prefer home-centered care,” he said. “They like the privacy. This is the general direction of health care, as evidenced by so many other home tests out there now. In this trial, we want to reach people who otherwise might never come in to get screened.”

So, wouldn’t it be even better, Raz is asked half-seriously, to bring the CT scanning machine to people’s homes? His answer is unexpected.

“We’re thinking about getting a bus!” he smiled.