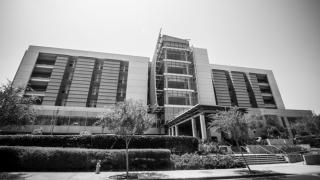 By
Michael Easterling
Patient Care
March is National Colorectal Cancer Awareness Month. The disease remains the fourth most common type of cancer and the second deadliest. In 2022, more than 150,000 people across the United States will be diagnosed with colorectal cancer.
There are 1.4 million colorectal cancer patients and survivors living today. Among them is City of Hope patient Daryl Twerdahl, who has been successfully treated for the disease twice thanks to her multidisciplinary care team led by her physicians, Marwan Fakih, M.D., the Judy & Bernard Briskin Distinguished Director of Clinical Research and her medical oncologist, and Trilokesh Kidambi, M.D., her gastroenterologist.
“I can’t say enough about my care team at City of Hope,” said Twerdahl, 73, who spent almost 20 years as the director of development for the St. Vincent Meals on Wheels program and now serves as executive director for Meals on Wheels California. “City of Hope gave me what I needed, and I am forever grateful.”

Twerdahl had been diligent about having regular colonoscopies. She had a reliable gastroenterologist who expressed concern in 2015 when her scans showed her body was developing many polyps in her colon.
“I had the polyps removed and thought everything was going to be fine,” she said. “But it wasn’t fine. There was a malignancy and I was suddenly faced with having to decide where I would be treated — for colon cancer.”

Twerdahl was thorough in her research and began a series of what she called “interviews” with various oncologists in the Los Angeles area at different institutions. It didn’t take her long to realize that City of Hope was the best option for her.
“Duarte was pretty far away for me, and there were certainly other, closer places I could have gone,” said Twerdahl, a resident of Hancock Park in the mid-Wilshire area of Los Angeles. “I became a patient of Dr. Fakih in October 2015. He clearly stood out from all the others I had interviewed about my case. I have so much respect for him, and he took such good care of me.”

Twerdahl met with a City of Hope genetic counselor, who analyzes saliva or blood samples. There was no family history of cancer, but the testing showed that Twerdahl carries a mutation that predisposes her to colon cancer.
“She has what is called an MSI high tumor, which means there was a mutation in the MLH-1 gene, which is used to repair DNA,” Fakih said.
Marwan Fakih, M.D.
“We have an established Center for Precision Medicine now that is testing tumors and the genetics of all our patients,” Kidambi explained. “We didn’t have that back in 2015, but with Daryl, we had the ability to test her because her tumor showed certain features that suggested an underlying genetic cause.”
“What we have learned is that colorectal cancer is not just one disease,” Fakih said. “Therefore, the approach to how we treat each individual patient should factor in the location of the tumor — what we called ‘sidedness’ — among other alterations like we found with Daryl’s genetic testing.”
It was Fakih’s expertise and candor that Twerdahl said impressed her the most.
“I loved his manner, how straightforward he is,” she said. “I don’t want my doctors to paint a rosy picture for me if that’s not the case. He was specific about my diagnosis and recommended treatment and what to expect. He was very centered, which kept me very centered.”
Fakih prescribed a standard chemotherapy regimen for his new patient. When Twerdahl began the treatment, she began experiencing crippling pain after a couple of weeks, to the point where she asked Fakih to take her off of it.
“I told him I could not tolerate the chemotherapy,” she said. “I explained to him the pain I was having, that I couldn’t eat or drink anything without throwing up. He said to me, ‘That’s not a result of your chemotherapy.’” He immediately ordered a new scan and called Twerdahl later that evening with the results.
“He asked that I come to City of Hope at 8 o’clock the next morning and to not eat anything that night,” she said.

The scan had revealed what Fakih knew to be true: It was not the chemotherapy that was causing Twerdahl such pain. Because of her cancer and the polyps, her colon was fully blocked by scar tissue, layer after layer.
“It looked like a nautilus shell,” Twerdahl said. This was in December 2015, not long before Christmas, and Twerdahl had plans with her family.
Trilokesh Kidambi, M.D.
“It seems silly now, but I actually asked if I could wait until after the holidays, if I could have the procedure to remove the scar tissue in January,” she said. “Dr. Fakih said, ‘You don’t understand, this is an emergency surgery. We’re doing this today.’”
“I did get home before Christmas after all,” she said. “I felt so much better. I could finally eat, and I wanted to eat everything.”
Twerdahl continued her treatment into 2016, optimistic as to what the new year would bring. Her physicians monitored her, and she dutifully submitted to colonoscopies, which would become a regular part of her life. She was allowed to return to work and, with the aid of a traveling nurse, had her chemotherapy administered in the office.
“City of Hope was open to whatever worked best for me,” she said. “I always participated in my treatment. I wasn’t told, ‘You need to do this’ and ‘You need to do that.’ I was able to make decisions for myself that didn’t compromise my care, and have some semblance of control over my life.”

Then, in January 2020, fate took control when Twerdahl was undergoing another routine colonoscopy: More polyps were found, and they were again malignant. She had a second diagnosis of colon cancer.
“We knew her initial tumor biology showed microsatellite instability, so we offered her more intense surveillance than the typical colorectal cancer patient, who may go as long as five years between colonoscopies,” Kidambi said. “Our understanding of the molecular profile of her initial colorectal cancer allowed us to offer her a more personalized surveillance strategy that found this second colorectal cancer early, and allowed her to swiftly have surgery to remove it. Fortunately, it was Stage 1.”
Kurt Melstrom, M.D., M.S., performed Twerdahl’s surgery.
“Daryl’s cancer this second time around was caught early because of the intense surveillance by Drs. Fakih and Kidambi,” he said. “We gave her several surgical options, and she decided on removing 80% of the remaining colon as a preventative instead of undergoing any future surgeries. She has done well postsurgery.”

Advantages of Coming to City of Hope

Melstrom was able to take a minimally invasive laparoscopic approach, which he said is a differentiator in the standard of care City of Hope provides.
Kurt Melstrom, M.D., M.S.
“Daryl’s case highlights some major advantages of coming to City of Hope,” Melstrom said. “If she did not come in for the routine, but rigorous, surveillance that we recommended, then the second cancer wouldn’t have been found until much later. Additionally, we now approach almost all of our surgeries through robotic or laparoscopic procedures, which are less invasive and require less recovery time, but this is not the current standard across the country.”
“I did fine, no complications from the surgery, and I recovered,” Twerdahl said. “I was so relieved that chemotherapy wasn’t required, and that surgery corrected it.”
Just last month, Twerdahl had her most recent colonoscopy and received a clean bill of health. In addition to her physicians, Twerdahl also credits her extended team at City of Hope for addressing all aspects of her patient experience.
“From the nutrition counseling to the guided meditations offered by supportive care, even to the volunteers who come to your room and rub your hands and feet, it all made such a difference,”  Twerdahl said. “I always felt very well cared for and, today, remain extremely positive. I tell friends who may be facing cancer, ‘I wouldn’t go anywhere else.’”