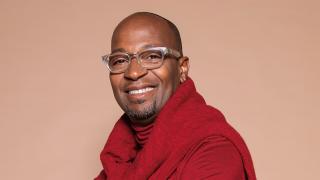 By
Malcolm Bedell
Patient Care
In 2018, Kuk Harrell was at the top of his game professionally. The songwriter and vocal producer had spent a career working with the top talent in pop and R&B music, listing Mary J. Blige, Beyonce and Rihanna to his tally of collaborators, alongside industry legends including Celine Dion, Mariah Carey, Lionel Ritchie, Justin Bieber and Britney Spears. Harrell’s work had earned him five Grammy awards, as well as several nominations for his work in motion pictures.
However, 2018 was also the year that a prostate-specific antigen test, or PSA, conducted on Harrell first revealed elevated antigen levels that pointed to prostate cancer. After an initial surgery in Atlanta, he sought treatment at City of Hope, where several weeks of radiation treatment and hormone replacement therapy have produced “an excellent remission,” according to his oncologist, Tanya Dorff, M.D., associate clinical professor in the Department of Medical Oncology & Therapeutics Research.
Throughout his cancer journey, which Harrell described as a “wilderness,” he learned a great deal about himself, the strength of his character and the opportunities cancer gave him to be a source of courage and hope for others. In honor of Harrell’s role as a patient speaker at City of Hope’s 2019 Spirit of Life gala, we caught up with the members of his care team for their perspective and insights on Harrell’s cancer journey.

Tanya Dorff, M.D.
served as Harrell’s oncologist during his cancer journey. “Kuk was so nice, so low-key and so motivated. He traveled all the way from Florida to be treated at City of Hope. He has an amazing support system; they were all here for his last day of treatment. I don’t know if they all live in Florida, but this show of support for him stood out.”
Dorff has been “very encouraged” by Harrell’s progress so far, with PSA levels that are now “undetectable.” She credits City of Hope’s “support for the whole patient as a person, including state-of-the-art treatment, outstanding radiation technology and doctors who design outstanding treatment plans” with Harrell’s continued recovery.

Savita Dandapani, M.D.
For Dandapani, Harrell’s willingness to try to be a source of inspiration for other patients on similar journeys was most memorable. “Kuk’s kindness to everyone here really stands out to me, especially toward the other patients in the waiting area,” Dandapani said. “Both he and his family really took time out to talk to other people. Even on his last day of treatment, everyone was involved; it was a team effort where we all celebrated his being done with radiation. I was impressed with how kind and humble he is; he didn’t have to take time to talk to others, but he always did.”

Lupe Santana
For Santana, Harrell’s faith was immediately evident and played an enormous role in his cancer journey. “Kuk walked in holding hands with his faith, and his strong belief was evident through it all,” she explained. “He is genuine in his kindness, his gratitude for life, his love of family and his unwavering belief that God is his shield.”
Santana also acknowledged Harrell’s unwavering sense of humor as a factor in his recovery. “On one occasion,” she said, “he had to change his appointments twice due to Rihanna changing venues, and I told him I would call her if need be. This made him laugh as I hoped it would. No matter what his treatment brought forward, he always met it head-on with a ‘can do’ attitude. I can't speak enough about his positive nature, always looking for the best in each day, instead of the major or minor interruptions life brings.”
“Kuk has a great following here at City of Hope, and met several patients who to this day stay connected with him. We all fell in love with his good nature, but for me, it was his faith that will always stand out. It is an honor for me to have met Mr. Harrell and his family.”

Alan Che
Che counts Harrell as someone “dear to him,” and a patient who changed his whole approach to his role as a radiation therapist, specifically on a human level. “There were plenty of days where I found myself taking morethan the allotted time with Mr. Harrell,” Che said. “We would talk about radiation physics, the importance of having the proper prep work done for a particular treatment, or the side effects. Consequently, there were ‘those’ days for Mr. Harrell where raw emotion, determination and faith meets the proverbial pedal; tears rolling down his face filled with a plethora of emotions. Those days were not only hard for him, but were difficult for me, as well.
“Mr. Harrell has this charisma that brings out the humanity in others. Over time, staying professional in a work setting while exerting compassion and kindness melded together, eventually becoming one and second nature while near him. He does this to people. It became apparent when Mr. Harrell was regularly seen talking to other staff and patients everywhere, leaving traces of that intrinsic humanistic emotion that we all call hope in his wake.”

Krystal Poblette
"It is an understatement to say he was simply a pleasure to treat,” Poblete said. “I saw him from beginning to end, starting with his CT simulation through to his last day of treatment, and he was never without a smile on his face.
What strikes me about Kuk Harrell is how personable he is. You may meet him once, but he'll make you feel like you've been friends forever. He always has this positive energy about him that just radiated to everyone he came into contact with, whether it was someone on his treatment team or the person sitting next to him in the waiting room. Even through challenges during his radiation treatment, he never let them deter him from beating his cancer. His outlook on life has moved me on both a professional and personal level. He is definitely someone you can’t forget!”

Nick Nguyen
For Nguyen, Harrell’s faith was immediately apparent. “He is a believer,” Che said. “He believes in his faith with true and honest fidelity. He believes in the love from his family wholeheartedly. He believes with wide open arms inthe people who are in charge of his care (radiation therapists, radiation oncologist, and the fellow patients who share the waiting room with him). His true devotion to be a believer in you brings out the best in you, the best in me. It is this very nature of his that brought him so much positive energy, love and support. The approach that he took toward his treatment, I truly believe, is the reason he’ll achieve remission and stay in it.”