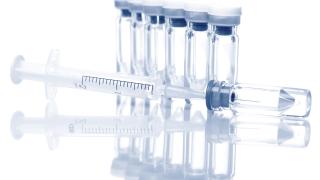 By
Letisia Marquez
COVID-19
Research
City of Hope has initiated a phase 1 clinical trial that will test one of its investigational SARS-CoV-2 vaccines in healthy volunteers from the ages of 18 to 54 who have not had COVID-19. The investigational vaccine, known as COH04S1, aims to stimulate the immune system to produce antibodies, which can block the virus from entering cells, and also spur abundant T cells that are thought to provide the elusive long-term protection that could protect against future outbreaks.
Don. J. Diamond, Ph.D.
“Based on  preclinical research, we are hopeful that the vaccine will protect against SARS-CoV-2 infection that can lead to COVID-19 disease, helping to halt the spread of the current COVID-19 pandemic,” said Don J. Diamond, Ph.D., a professor with City of Hope’s Department of Hematology & Hematopoietic Cell Transplantation, who led the investigational vaccine’s development. The trial’s goal is to test how safe the investigational vaccine is, and how well it is tolerated.
To produce the investigational vaccine, a team of City of Hope scientists, led by Felix Wussow, Ph.D., and Flavia Chiuppesi, Ph.D., both City of Hope assistant research professors in the Department of Hematology & Hematopoietic Cell Transplantation, together with Diamond, first developed a synthetic modified vaccinia ankara (sMVA) platform technology to house the genetic components that make up the compound at a molecular level. MVA is a weakened poxvirus that is approved by the Food and Drug Administration for the prevention of smallpox and monkeypox, and is also included in the federal government’s Strategic National Stockpile for lifesaving use during a public health emergency.
SARS-CoV-2 spike and nucleocapsid proteins were inserted into the MVA platform. The MVA could then replicate DNA within cells, leading to the expression of the SARS-CoV-2 proteins, which trigger immunity against the virus. Previous experience with MVA-based vaccines has shown few side effects due to the generally highly attenuated or weakened virus-based vaccine makeup.
“City of Hope has extensive experience developing and using MVA vaccines, which have a record of safety and efficacy,” Diamond noted. “We chose this vaccine platform because MVA vaccines have been shown to be safe and effective in immunocompromised patients, such as cancer and transplant patients, and can produce an immune response in less than 14 days with long-lasting T cell immunity.”
The MVA platform, which can also be repurposed to work against other viruses and pathogens, has similarities to the Triplex vaccine developed by City of Hope against cytomegalovirus, a herpesvirus that can cause complications for stem cell transplant recipients. Research published in Annals of Internal Medicine showed that patients in the phase 2 randomized multicenter trial who received Triplex were less likely to develop health complications related to the herpesvirus than patients who did not take it. The p53MVA vaccine, also developed at City of Hope, continues to be used in combination with cancer drugs, such as pembrolizumab and gemcitabine, against solid tumors.
John A. Zaia, M.D., the trial’s principal investigator and City of Hope Aaron D. Miller and Edith Miller Chair in Gene Therapy, said those who volunteer for the study will receive a thorough health screening, including testing to determine whether they have COVID-19 or antibodies against the virus. They will also be asked to donate blood and saliva for research testing, as well as participate for one year in follow-up visits done via telehealth and in person.
The trial will examine if a single dose may be sufficient for immune protection, including the highly sought-after long-lived T cell immunity that could extend protection so that there may never be a need to get a booster shot in future years. The investigational vaccine is being developed in a freeze-dried form to eliminate cold-chain requirements.
Trial participants will receive two injections in the muscle of their upper nondominant arm 28 days apart. The injections could be both the investigational vaccine, the vaccine followed by a placebo, or both injections could be placebos.
City of Hope aims to enroll a minimum of 119 trial participants in approximately four months. When a safe and tolerable dose is defined by this first trial, it can then move to testing in a phase 2 trial — potentially in the second quarter of 2021 — with larger numbers of participants, and then eventually to a phase 3 trial.
The investigational vaccine is being manufactured on City of Hope’s main campus within its Center for Biomedicine & Genetics, one of its three manufacturing facilities that meet strict GMP (good manufacturing practice) guidelines.
City of Hope has a distinguished legacy of scientific breakthroughs, having helped develop some of the most widely used cancer and diabetes drugs. City of Hope created the technology used in the development of human synthetic insulin and numerous breakthrough cancer drugs, including trastuzumab (commercial name: Herceptin.) Its unique research and development hybrid of the academic and commercial creates an infrastructure that enables City of Hope researchers to be active in new discovery, submitting an average of 50 investigational new drug applications to the U.S. Food and Drug Administration each year. The institution currently holds more than 450 patent families.
People interested in finding out more about the trial can email CovidVaccine@coh.org or read more information here.