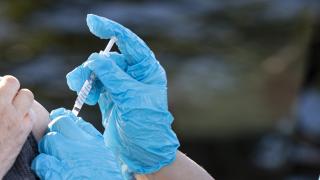 By
Geoff Mohan
Patient Care
Early this year, Laura Kruper, M.D., M.S., chief of the Division of Breast Surgery at City of Hope, started seeing more women whose lymph nodes looked suspiciously enlarged on routine imaging. The discoveries of these enlarged lymph nodes, which can be a sign of cancer, caused “quite a few scares,” Kruper said, particularly since many of the women coming in for mammograms and ultrasound imaging at City of Hope are patients who have had breast cancer.
“We were doing biopsies because these lymph nodes appeared abnormal,” Kruper recalled. “The first thing you think about is, ‘Oh no, is this a recurrence?’”
But the preponderance of tests came back negative for cancer. It was the same situation in other imaging centers nationwide, where routine screens of women who never before had presented any signs of cancer now showed suspicious armpit lymph nodes, known as axillary adenopathy (the axilla is your armpit).
Laura Kruper, M.D.
It didn’t take long to find a suspect: COVID-19 vaccines. Included deep within adverse-reaction reports of the vaccine trials for the Moderna and Pfizer vaccines were significant numbers of recipients reporting swollen axillary lymph nodes — as high as 16% of those getting a second dose of Moderna, for example.
“The Society of Breast Imaging noticed,” Kruper said. “They understood pretty quickly that the numbers of abnormal imaging of axillary lymph nodes were much higher than usual. But it did make it particularly confusing.”
For example, Kruper said she has a patient who had breast cancer 10 years ago. "She was recently found to have a breast cancer recurrence and, as part of the workup, she underwent a CT scan followed by a PET scan. She had enlarged lymph nodes in both axillae, as well in her mediastinum — that's inside the chest.” That would be a bad sign if it was due to cancer, but “it turns out that all of those lymph nodes were enlarged from the COVID-19 vaccine,” Kruper said. The patient's workup ended being much more extensive because of the enlarged nodes from the vaccine.
Now, City of Hope’s imaging staff asks women about their vaccine history to probe whether swollen lymph nodes might be linked to a natural immune system response to the vaccine. But City of Hope's Women’s Center still receives a lot of questions. Here are a few of them, and Kruper’s advice.

What kind of imaging picks up swollen lymph nodes?

More often than not, it’s ultrasound. But a mammogram might find it, too: “It catches the edge of the pectoralis, which is the muscle on the chest wall,” Kruper said. “And up in that area, that's where you usually see lymph nodes. But it really is the ultrasound that gives you more definition about the lymph nodes.”

How can I avoid a scare?

It can be anxiety-inducing to get a call-back after your mammogram for further imaging and possibly other procedures. So Kruper recommends following the advice of the Society of Breast Imaging: “When possible — being sure not to unduly delay care — schedule screening exams before the first vaccine dose or four to six weeks after the second dose.”
A July study in JAMA Oncology found that 3% of vaccinated women imaged at a Florida Mayo Clinic in the first three months of this year showed signs of axillary adenopathy (ordinarily, that rate should be .02-.04%). That incidence dropped precipitously the farther they were from their shot — with no reports at four weeks, the study found.

Will I wind up getting a biopsy?

If the rest of the breast imaging is normal, you’ll probably be told to come back in six to eight weeks to recheck the suspicious lymph nodes. That’s because it’s unusual to have a normal breast image and axillary adenopathy.
“Women can get something called occult axillary metastasis, meaning they have a cancer in their lymph nodes but it's of breast origin, and there's no cancer in the breast,” Kruper said. “But those are certainly rare enough that if somebody had a screening mammography and all they had were enlarged lymph nodes and nothing in their breast and recently had a COVID-19 vaccine, we would most likely watch them and have them come back short-term for imaging.”
Nonetheless, standard protocols for certain test results will still apply, Kruper said: “If a woman has breast cancer and she's recently had the COVID-19 vaccine, it doesn't matter. We're going to work up any abnormal lymph node. We're not going to miss a cancer that has spread to lymph nodes by assuming the enlarged nodes are from the vaccine.”

Does it matter which arm gets the shot?

Choosing your vaccination location by trying to avoid soreness in your dominant arm makes perfect sense if you’ve never had breast cancer. Bear in mind that a swollen lymph node on the side where you had cancer will raise more alarm for you and your doctor. Get the shot on the other side when possible.

Which is more important, a mammogram or a vaccine?

That’s a conversation that you should have with a primary care provider, said Kruper, who nonetheless has a professional preference: “First, if possible, get a screening mammogram, followed by the COVID-19 vaccine. But, this question arose with some of our patients; for most, we thought it was more important to get the COVID-19 vaccine first, followed by imaging six weeks later. COVID-19 can potentially put a person in the hospital, or worse, and breast cancer, if it's picked up by mammography, is most likely early stage, and we have great treatments for breast cancer,” she said. “That being said, please don’t forget to get your annual screening. Many women have delayed screening during the pandemic.”