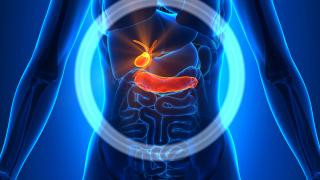 By
Maxine Nunes
Patient Care
Gallbladder and bile duct  cancers can be even more deadly than pancreatic cancer. Thankfully, they are rare — nearly 12,000 cases a year in the U.S. But statistics don’t mean much if, like Chicago Bears football star Walter Payton, the diagnosis proves fatal.
When detected early enough, surgery can be an option, and the standard of care — resection followed by chemotherapy — can have excellent results. But these cancers are aggressive and often go undetected because symptoms don’t appear until the later stages, when tumors have become inoperable. At that point, they are usually treated with chemotherapy alone, and the average survival time is just 11.7 months.
Now though, there’s good news on the horizon.
With the advent of genomic tumor profiling and a new generation of targeted drugs and immunotherapy, there’s been enormous progress in the battle against these diseases.
What’s more, increasingly sophisticated scanning technology is helping to detect gallbladder and bile duct tumors at earlier stages than was once possible.

Very few surgeons in the U.S. are experts in gallbladder and bile duct cancer. One of them is Yuman Fong, M.D., chair of City of Hope’s Department of Surgery.
He explained how patients generally learn they have one of these cancers.
“The accidental discovery of these cancers during scans for other things is the most common way they are found in the U.S. They can also be identified in the lab after a gallbladder is removed for stones,” said Fong, the Sangiacomo Family Chair in Surgical Oncology. “And if the results of a blood test show even slightly abnormal liver enzymes, don’t ignore it. Get a sonogram or a scan.”
If a tumor is found that might be gallbladder cancer — be very careful how you proceed.
“When a doctor’s first response is to put a needle in it for a biopsy, be careful,” Fong warned. “Biopsies run the risk of spreading the disease. Gallbladder cancer is very aggressive and when it spills, anyplace it lands, it grows.”
This may mean that patients might have to undergo extensive surgery without a biopsy, Fong added, and such surgeries should be done by a surgeon knowledgeable in gallbladder cancer.
“The level of surgical expertise needed is high, so find a cancer surgeon who actually thinks about cancer all the time,” he said.
Be aware, too, that during surgery for gallstones, the gallbladder is not entirely removed — so if there’s cancer, further surgery will be needed.
Fong strikes a more optimistic note for some bile duct cancers, such as peripheral cholangiocarcinoma.
“Many of these used to be misdiagnosed as metastatic cancers of unknown origin,” he said. “Surgical therapy would not be contemplated and patients would die. Now, we can make the diagnosis and resect some patients for potential cure. Chemotherapy is also getting better for these tumors in the palliative setting.”
Most exciting, though, are breakthroughs in immunotherapy and targeted medications, which are already saving lives that might otherwise have been lost.

City of Hope medical oncologist Daneng “Dan” Li, M.D., who leads the hpatobiliary tumor program, has extensive experience with biliary tract cancers.
“The first thing to understand is that not all gallbladder and bile duct cancers are alike,” he explained. “They’re really of mix of different types of tumors and, therefore, should be treated with an individualized personal approach.”
For example, some gallbladder and bile duct tumors have a mutation called MSI-high, an indication of microsatellite instability, an impairment in DNA mismatch repair proteins, which repair glitches on a cellular level.
“The immunotherapy drug pembrolizumab (Keytruda) has been FDA-approved for many types of cancer with this impairment,” he said, “and patients respond really well to this treatment.”
About 5% of biliary tract tumors harbor the rare BRAF mutation, and two paired oral therapies, Dabrafenib and Trametinib — which have been Food and Drug Administration (FDA)-approved for BRAF-positive melanoma — are having great success with gallbladder and bile duct tumors that have this mutation. A European trial of another targeted therapy for the BRAF mutation recently ended, and results should be reported soon.
“We have seen cases of amazing response to BRAF agents,” said Fong, “and we are very excited to see if trials results will support routine clinical use.”
In addition, a phase 3 clinical trial for tumors with an IDH1 mutation, which occurs in about 15% of bile duct tumors, had very good results for patients with advanced disease, using the targeted medication ivosidenib.  This drug is currently undergoing the FDA review process for approval for patients with bile duct tumors that have this mutation.
Phase 3 clinical testing is also underway using targeted therapies for another genomic alteration, FGFR2 fusion, found in 10-16% of bile duct cancers, and the results look promising.
Another approach to biliary tract cancers, CAR T cell therapy — engineering a patient’s own T cells to fight cancer — is in the preclinical stages of research.
In light of these breakthrough treatments, Li has one important message for anyone diagnosed with gallbladder or bile duct cancer:
“Be sure to get a genomic profile of the tumor to see what mutations it harbors,” he said. “Then you can be treated based on an individualized approach.”
800-826-4673