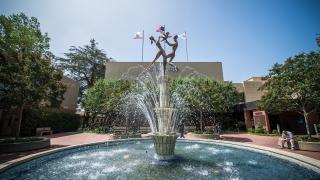 “There’s something wrong with your breast,” a technician told Sonia Bautista after a mammogram and ultrasound. “You need a biopsy.”

“I felt like I was falling into a hole, a deep black hole,” Bautista recalled.

It was the summer of 2019. Two weeks later, Bautista’s primary care physician told her she had breast cancer and sent her to City of Hope for a more detailed diagnosis and treatment plan.

“At that point, I felt really desperate because I didn’t know how aggressive it was,” she said. “No one in my family ever had cancer before. I wondered, why me? Why right now?”

Her life was so full. Bautista and her husband Miguel, owner of an electronics recycling center, live in Corona, California, have been married for 24 years and have three children, all living at home. Their lives revolve around family, their church and the faith-based marriage-counseling group that saved their relationship after they’d separated about 20 years ago.

One clue to the enduring love between them is the heart that links their names in their shared email address — a connection that could be felt as Miguel described their first visit to City of Hope in Corona.

“The first day we walked into City of Hope, we were like two scared little puppies,” he recalled. “When we saw Dr. Karimi, he was really prepared, and cleared up a lot of the doubts and fears that we had.”

They learned that Bautista’s cancer was Stage 3, and that it was estrogen receptor (ER) positive, progesterone receptor (PR) positive and growth factor (HER2) negative. As a result, her treatment plan included chemotherapy, followed by surgery and radiation.

“I was so relieved once I knew what stage the cancer was and what my treatment would be,” she said. “I was like, OK, let’s do this.”

There was something else Bautista and her husband really appreciated about their entire experience at City of Hope — a personalized quality of care,  starting with the receptionist who greeted them, their first doctor and their current oncologist, Mohammadbagher Ziari, M.D., assistant clinical professor in the Department of Medical Oncology & Therapeutics Research at City of Hope | Corona.

“At City of Hope, you’re not just a number. There’s always a human touch — with both the patient and their companion,” Miguel said. “It's always like family when we go there.”

Chemotherapy, was difficult for Bautista. She suffered from fatigue, bone pain, nausea and loss of appetite.

It wasn’t easy for her family, either. Miguel choked up as he recalled what it was like for him and their children.

“Sonia’s the one who had all the pain and suffering, but the kids and I, we went through a lot of ups and downs, a big rollercoaster of emotions,” he recalled.

It was nurse practitioner Stephanie Hernandez who helped them get through it.

“One of the first things nurse Hernandez told me was to ‘Always bring a second set of ears,’ and that was key,” Miguel said. “Sometimes, the way Sonia was feeling, she didn’t always grasp everything. And because I was there, I could remind her.”

Hernandez was also a big help to their children.

“She talked to our kids in terms they understood and assured them that, even though their mother was very sick, the treatment would help and she wasn’t going to die. After that they became kids again.”

Once the children had been reassured, they were a big help to their mom.

“Their job was to make her smile every day, to make her laugh, to help her walk when her joints hurt and to feed her as much as they could,” Miguel said.

The staff at Bautista’s infusions also played an important role in getting her through this tremendously difficult time.

“When I went for chemo, there were three nurses there. They treated me like we were sisters. I love them a lot,” Bautista said.

Once she finished chemotherapy, Bautista had a big decision to make. Surgical oncologist Jamie Rand, M.D., assistant professor in the Division of Breast Surgery at City of Hope in Duarte, explained in detail Bautista’s choices — she could have a mastectomy to remove the entire breast or a lumpectomy to remove only the cancer.

Bautista chose the lumpectomy, which was followed by adjuvant radiation.

Today, she has been in remission for a more than year — and to help keep it that way, Bautista continues to take two estrogen-blocking drugs, tamoxifin and Zoladex.

Because the origin of her cancer wasn’t genetic, Bautista believes the cause might have been linked to her lifestyle. She was overweight, and her diet included too much sugar and foods with chemical additives.

“After my diagnosis, we changed our way of living,” Bautista said. “The whole family started eating organic food, a lot more veggies without preservatives, and no sugar.”

Her experience with cancer also gave Bautista a new outlook on life.

“One day, you’re fine, and the next, you have cancer. You never know what's going to happen tomorrow, so I have to live my life to the fullest.” Then she laughed and said, “I smile all the time now.”