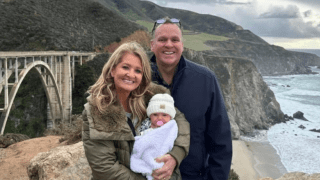 And not just because of his profession.

“Pastor Craig” (everybody calls him that) leads the Shadow Rock Church in La Quinta, California. He believes in miracles because as far as he’s concerned, he’s living one right now.

Barely three years ago, doctors told Cunningham, 53, that he had six months to live. The news was a body blow to a family already slammed by life-altering disease: Cunningham’s wife Tricia had just gone through major surgery to remove a brain tumor that threatened to blind her. It was during the early days of her recovery when Cunningham began experiencing symptoms.

“I’m in the ICU with Tricia, and I’m starting to feel sick,” he recalled. “There was pain in my side, I couldn’t eat. I thought it might be my gallbladder. Both my dad and my brother had had theirs removed.”

It wasn’t the gallbladder.

The first ominous clue came when Cunningham had an ultrasound and the technician, who normally isn’t supposed to say anything, utterly shifted demeanor and asked, “How are you not in pain all the time? There are so many lesions!”

The oncologist spelled it out in the grimmest of terms. Cunningham had advanced stage colon cancer that had spread to his liver, which was pockmarked with some 50 tumors. Chemotherapy may help, the doctor said, but this form of cancer had, at best, a 15% survival rate.

“It was unbelievable,” said Cunningham. “Tricia and I had just been talking about how healthy we’d always been.”

It was also a traumatic experience for these people of deep faith.

“The ground was pulled out from under me,” Cunningham said. “I was filled with anxiety. I even asked, ‘Is there a God?’ My daughter fell to the floor screaming, ‘Who’s going to walk me down the aisle?’

“But I knew God wouldn’t lie to me, and that if I was healed, I win, but if I go to heaven, I still win. I was at peace with that.”

“No matter what we would go through,” echoed Tricia, fighting back tears, “God was in control. I prayed every day that Craig would be healed, but I also knew our faith wouldn’t be shattered by this.”

Finding a Surgeon Willing to Take a Risk

There was one slim chance. If chemotherapy could shrink the tumors sufficiently, aggressive liver surgery might save Cunningham — if a surgeon could be found.

Desperate, Tricia dove into research and networked everywhere, calling one surgeon after another. No one would take the risk. It was now December 2019. The Cunninghams began to feel they were about to mark their last Christmas together.

That’s when a member of a Facebook group pointed Tricia to City of Hope and its Department of Surgery Chair Yuman Fong, M.D., an internationally known liver cancer expert.

“His condition was dire,” said Fong, the Sangiacomo Family Chair in Surgical Oncology. “Most surgeons wouldn’t do it. Even I wasn’t 100% sure. But I’ve seen many cases like this, and I knew there was a small chance.”

The reason lies in the nature of the liver.

Years ago, if tumors from colon cancer were detected in the liver, it was assumed that the cancer had spread everywhere. Now, however, Fong and others know that “the liver is such a good filter, the cancer really doesn’t go anywhere else.”

As a result, Fong says, “With surgery we can now achieve a five-year survival rate of 60%, and a total cure rate as high as 40%.”

“What’s more,” he continued, “it has become a very safe procedure, with less than 1% of patients dying from the surgery. If only everyone understood the data, more lives could be saved. Right now, only about 5% of patients in this condition go through with surgery, when we think as many as 40% could be eligible.”

Another reason so few get the surgery is that it requires advanced surgical abilities. This is not a minimally invasive, robotic-assisted procedure. “This case was a difficult operation because of how many tumors there were,” Fong said. “Only a very experienced liver surgeon would attempt this one because of the technical difficulty.”

“We wanted hope, not false hope,” said Tricia. “Dr. Fong never said he was positive this would work.”

“He took the time to sketch it all out for us,” added Cunningham. “I walked out of there feeling I knew more and understood what needed to happen.”

And one more thing.

The Cunninghams’ daughter was getting married in a few months. To make sure Cunningham could walk her down the aisle, Fong strongly suggested moving up the wedding to a date prior to surgery. They did.

Before surgery, Cunningham’s four dozen-plus tumors needed to be reduced in size. The intravenous chemo he’d been receiving was working, but Fong wanted a stronger approach. He opted to insert a port into Cunningham’s liver to deliver the chemo directly to the tumors. This proved to be remarkably effective, rapidly shrinking the lesions down to manageable size, even though Cunningham developed an infection and the treatments had to be cut short.

Later, the liver resection went well. It took a deft hand, and with so many tumors, Fong had to remove half of Cunningham’s liver. There have been a handful of minor recurrences since, dealt with successfully with additional chemotherapy, radiation and an ablation procedure. “If recurrences are small, we don’t have to do more surgery,” Fong explained. “We can do radiation treatment or microwave ablation with high effectiveness.”

Recently, a tumor near Cunningham's heart experienced some growth. With the area too delicate to withstand radiation, Fong plans to open Cunningham up and ablate the otherwise inoperable tumor himself. The Cunninghams have full confidence in him. "We are huge fans of Dr. Fong," Tricia says.

A Leap of Faith

Yes, they’re calling it a miracle, but with plenty of kudos all around, especially for City of Hope.

“If we had just gone to our local oncologists,” Tricia asserted, “Craig would not be here today. If not for someone giving him so many options …” her voice trails off.

It’s a takeaway shared emphatically by Fong, who points out that many hospitals don’t even have a liver surgeon, and most local oncologists are simply not aware of every newest option.

“We need to establish a cancer patient’s Bill of Rights,” he said. “Every patient should have the right to get a second opinion at a major cancer center.”

The Cunninghams now joyfully share their story with their Shadow Rock congregation, who took this journey right along with the family, even making their own leap of faith at one point. Just as Cunningham was getting that grim six-month diagnosis, the church was making an offer to purchase a new building. Cunningham had to break the news to church leaders.

Cunningham says he’s undergone a “paradigm shift” in his thinking, which he wants to pass along to other patients.

“When you go through this, you learn what’s important,” he says. “Especially family and faith.”

“There’s a light side, even to cancer. Cherish each moment. I want people to know there’s always hope. I want to offer them peace in the midst of their fear and anxiety.”

By the way, that hastily rescheduled walk down the aisle? Turns out it was only the first of several family weddings the Cunninghams have since been fortunate to celebrate together. “And three weeks ago,” Cunningham said emotionally, “I got to hold my first granddaughter.”

“They’re an amazing family,” he says.

Pictured above: Tricia, Craig and their new granddaughter Selah.